Employment of Armed Forces Against the Naxals 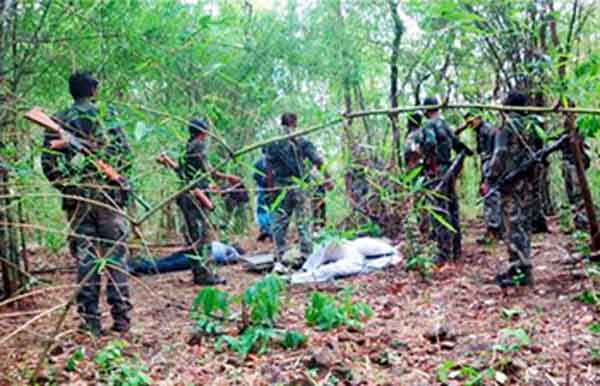 The origin of the Naxal problem is attributable to socio-political and socio-economic repression. The poor and Scheduled Castes (SC) were downtrodden by the Zamindars. Land reforms were nowhere. Forest land was shrinking. Added to that there was no development, in fact, governance was sorely lacking. At first, the states sought to control the problem through the state police forces. Most of the police were in a poor state. Numbers, infrastructure, weapons were minimal. They were swiftly rendered ineffective and the Para Military Forces (PMF) were called in. Additionally, the movement became more co-ordinated and stretched across state boundaries.

In 2009, the Naxalites were active across approximately 180 districts in ten states of India…

Chief of the Air Staff and Chairman COSC – that was me, innocent and unsuspecting, holding a press conference on Modernisation Programme of the Indian Air Force (IAF). After the subject was hashed and rehashed, all interested lobbies had finished their allotted questions, naturally the media turned to other issues which were obviously current. Naxal menace was the topic occupying the news. Asked whether I sought an incremental role for the IAF against the Naxals, I frankly replied what I had always believed in, that I was not in favour of employing the IAF against the Naxals; that we were already being used in benign roles helping the police fight Naxals and the use of air weapons in such a scenario was not advisable. Thereafter, I was quoted, misquoted and quoted out of context and generally dragged over the coals for trying to go against the Home Ministry’s desire by all forms of the media. It has been four years that I have held my peace. Since the topic is still relevant and current, I say what the hell, here goes.

The background of the Naxal problem is generally well known but the origins have been dimmed by the mists of time. Let me quote an extract from Wikipedia so that we all are on the same grid. “Naxal, Naxalite and Naksalvadi are generic terms used to refer to various militant Communist groups operating in different parts of India under different organisational envelopes. In the Eastern states of the mainland India (Chattisgarh, Jharkhand, West Bengal and Odisha), they are usually known as, or refer to themselves as Maoists while in the Southern states like Andhra Pradesh, they are known under other titles. They have been declared as a terrorist organisation under the Unlawful Activities (Prevention) Act of India (1967). Leaders of the movement have been found to have hide-outs located in China.”

The term ‘Naxal’ is derived from the name of the village Naxalbari in West Bengal, where the movement had its origin. The Naxals are considered far–left, radical communists, supportive of Maoist political sentiment and ideology. Their origin can be traced to the split in 1967 of the Communist Party of India (Marxist), leading to the formation of the Communist Party of India (Marxist-Leninist). Initially the movement had its centre in West Bengal. In later years, it spread into less developed areas of rural Southern and Eastern India, such as Chattisgarh, Odisha and Andhra Pradesh through the activities of underground groups such as the Communist Party of India (Maoist). For the past ten years, it has grown mostly from displaced tribals and natives who are fighting against the exploitation by major Indian corporations and local officials whom they believe to be corrupt.

In 2006, India’s intelligence agency, the Research and Analysis Wing (RAW) estimated that 20,000 armed cadre Naxalites were operating in addition to 50,000 regular cadres and their growing influence prompted Prime Minister Manmohan Singh to declare them to be the most serious internal threat to India’s national security.

In 2009, the Naxalites were active across approximately 180 districts in ten states of India. In August 2010, after the first full year of implementation of the national IAP program, Karnataka was removed from the list of Naxal affected states. In July 2011, the number of Naxal affected areas was reduced to (figure includes proposed addition of 20 districts) 83 districts across nine states. In December 2011, the national government reported that the number of Naxalite-related deaths and injuries nationwide had gone down by nearly 50 per cent from 2010 levels.

Whose Baby Is It Anyway?

The origin of the Naxal problem is attributable to socio-political and socio-economic repression. The poor and Scheduled Castes (SC) were downtrodden by the Zamindars. Land reforms were nowhere. Forest land was shrinking. Added to that there was no development, in fact, governance was sorely lacking. At first, the states sought to control the problem through the state police forces. Most of the police were in a poor state. Numbers, infrastructure, weapons were minimal. They were swiftly rendered ineffective and the Para Military Forces (PMF) were called in. Additionally, the movement became more co-ordinated and stretched across state boundaries.

The raison d’etre of the PMF is to tackle such contingencies. Except in one or two cases, as the Naxal movement snowballed, the PMF were stymied. Some of the reasons could be attributed to:

The states jealously guard their jurisdiction and frown upon any infringement by sister states. Since the problem stretched across state boundaries, continuity was a problem. The situation is like a balloon. If you applied pressure one side, the other side would swell and the Naxals would migrate to other states. There was no coordinated plan to counter the menace.

The Army and the IAF are meant to annihilate the enemy; the enemy is very clear and unambiguous…

Different forces with similar weapons and manpower tend to operate differently in anti-terrorist/insurgency situations. The difference comes in because of the leadership, command and control, ethos of the organisation and operational awareness. Presently, the CRPF is employed in company or platoon strength, often attached to local police with no specified area of operations. Inspectors are often in their fifties with insufficient knowledge of terrain or local conditions. Stamina and motivation are often not as high as one would find in a younger, professional leadership cadre.

Local police are used for intelligence. There is no coordinated intelligence grid and despite some efforts, no inter-state intelligence sharing. Even when invaluable intelligence is obtained, the reaction is slow due to a convoluted command chain.

A lot of money has been spent on acquiring new weapons and equipment. Training has not been commensurate. I remember when Remotely Piloted Aircraft (RPAs) of the IAF were deployed over Dantewada, we had accurate and timely IMINT on a large gathering of Naxals. We had even trained CRPF in slithering from choppers since the roads were likely to be mined. Our choppers were ready but the troops took a long time to assemble. Such fleeting targets do not remain for a long time and the operation was a failure. The security of camps needs beefing up; training standards raised, new weapons and equipment practised with. A communication grid needs to be established and soldiers trained in its use. So the proverbial ‘baby’ gets thrown out with the bath water. With the inevitable aftermath of massacres like Chintalnar, media hysteria takes centre stage and there is public outrage. The political leadership trying to minimise political damage comes out with all kinds of pacific statements. Then some wise guy says, get the Armed Forces inducted. Kill them, wipe them out. Some Chief makes his dissent public and all hell breaks loose.

One thought on “Employment of Armed Forces Against the Naxals”