Emerging political scenario in the sub-continent 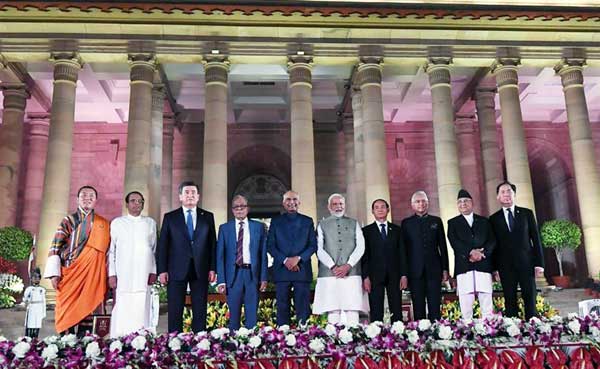 Days ahead of the parliamentary election in our country, Pakistan Prime Minister Imran Khan remarked in a press briefing that with a right-wing government in New Delhi chances for the resumption of Indo-Pak talks would brighten. As such, the landslide victory of BJP and Narendra Modi – led government would be a consolation for Imran peaceniks in Pakistan.

He believes that a right-wing government in New Delhi is tactically placed better to restart a meaningful talk with his government. Modi with a thumping majority in the parliament is better placed to restart the talks.

Political and economic scenario in the Indian sub-continent is going through a notable change. Pakistan is struggling to wriggle out of the financial predicament. She approaches various funding sources to help her overcome a financial crunch. Her good friends have extended a helping hand but international lending agencies generally attach conditions that are not easy to accept.

India, not much different from Pakistan in geographical or environmental terms, is one of the fast-growing economies of contemporary times. Her experiment would not be without merit for Pakistan’s financial and economic planners. After all no country would like to survive on doles from friends and sympathizers howsoever sincere just because the independent economy is the key to political sovereignty. Eventually, the two countries shall have to develop a just and mutually beneficial trade mechanism that promises to boost of all-round prosperity of two major sub-continental countries.   It is unfortunate that PoK side should have failed to understand the significance of this CBM and allowed selfish traders to misuse cross-LoC trade option in J&K that was assiduously built by the leadership of the two countries in 2008.  This entire exercise is now tied down to a host of conditionalities springing from a syndrome of suspicion and mistrust. Sincere efforts have to be made to put the system back on the rails.

Of late, Pakistan has begun to feel the brunt of a wrong and dangerous policy of patronizing extremists at home as auxiliaries. The justification for this misadventure, according to her military planners, is to create the first line of resistance to any aggression as a response to the perceived military threat from her eastern neighbour.  Pakistan’s lament that she is a victim of terrorism would have cut ice with many western powers If they were not convinced that Pakistan was home to many extremist organizations with suicide bombers operating in the neighbouring countries Afghanistan and India.

If external pressures have forced Pakistan to change the three-decade-old terror game with ramifications beyond her borders to the east and the west, India could cash on it but with caution and patience. Pakistani papers report that some small measures have been taken in the name of containing home-grown terror.  Maybe Imran Khan is in a more comfortable position of dealing with the hawks in the civilian as well as the military establishment in that country. However, to think that the financial crisis would force Islamabad administration to scale down its traditional acrimony against India is unrealistic. Developing states are prone to financial somersaults and that is not a very disturbing or permanent phenomenon.

In the aftermath of Balakot operation,, the level of cross-border infiltration in J&K has come down. It has weakened the operative capability of the underground terrorist cadres in Kashmir.

Pakistan did not respond to India’s repeated demands of stopping infiltration of jihadis from across the border in Kashmir. Had Pakistan responded positively, perhaps Indian security forces would not opt for the Operation All Out. The essential purpose of this operation is to create space for talks with Pakistan.

Modi has declared that one of the primary components of his government’s foreign policy is that of establishing cordial relations with our immediate neighbours. This is usually among the fundamentals of the foreign policy of a big and strong country. Not inviting Pak Prime Minister to oath ceremony of Narendra Modi is not to be construed as something akin to discourtesy or isolating Pakistan from South Asian fraternity.  BIMSTEC, the Bay of Bengal Initiative for Multi-Sectoral Technical and Economic Cooperation is an international organization of seven nations of South Asia and South East Asia, housing 1.5 billion people and having a combined gross domestic product of $3.5 trillion (2018). The BIMSTEC member states are among the countries dependent on the Bay of Bengal. Inclusion of Pakistan in this organization could be possible at a future time as was the case with China sponsored Shanghai Cooperation Organization (SCO)

It should be possible to think of another trade and communication-related entity to come up on the pattern of BIMSTEC with India, Pakistan, Afghanistan and Iran as its permanent members with almost identical agenda as of the Bay of Bengal Initiative. An entity of this kind could lend support to the establishment of peace in the region.

Stakeholders are in regular consultation over the situation in Afghanistan. It is becoming clear now that regional powers, Pakistan, India and Iran have to be taken on board as an interface among primary stakeholders in Afghan peace talk proceeds.  Imran Khan promises that his government will not allow the soil of his country to be used by extremists against a neighbouring country.  Pakistani media has come out with the news that at least 12 centers of training of anti-India jihadis meaning infiltrators into Kashmir have been closed down. A few ground realities are now established. Pakistan is a key figure in finding a lasting solution to the Afghan­­­­­­­­­­­­ problem. India remains a crucial factor in the economic and educational development of Afghanistan and Iran is a partner in this process.

Kashmir issue has bedeviled the two neighbouring countries for the last seven decades. No solution to the dispute is in sight. The fact is that India has always been on the horns of dilemma whether a civilian government in Pakistan including an elected one has the real freedom to talk and act on Kashmir resolution. In the case of Imran Khan, the general belief in political circles is that there is an understanding of sorts between the army and the PM. An understanding between the two does not necessarily mean an understanding pertaining to the Kashmir dispute. Nevertheless, Modi government should explore the possibility of talking to the Pakistan army through a proxy and examine to what extent current situation in the subcontinent would be effective in motivating Pak army for a deal with New Delhi.

One thought on “Emerging political scenario in the sub-continent”