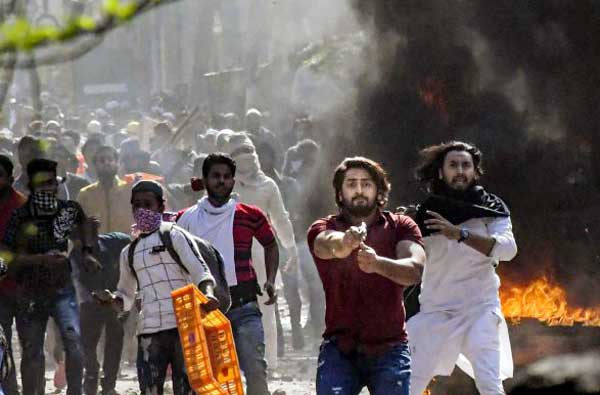 Many years back in Mumbai, then known as Bombay, car drivers used to be very particular while approaching certain road crossings, suspecting that there would be a policeman, fondly called Pandu Havildar, on duty there. The presence of a simple unarmed policemen, deterred many a driver from taking short cuts or driving through a red light. Fear of getting caught while crossing the red light and the fine or delay that followed is the essence of deterrence. The simple traffic policeman, Pandu Havildar epitomized the concept in its simplest form.

The fear of the simple Pandu Havildarat the road crossing, comes to mind when one observed the recent riots in North East Delhi. In an unexpected turn we had policemen being threatened by rioters, instead of other way round. Instead of police carrying arms to stop rioting, people witnessed the rioters threatening policemen with guns! How was the police force so emasculated that goons or wrong doers weren’t deterred by their presence and were instead threatening the police?

The slow but sure erosion of the deterrent effect of the police and other security forces has occurred over time, with many institutions and people contributing to it, some unknowingly and others with a purpose. Just a couple of months back, Delhi police while chasing arsonists entered the Jamia University campus and their library. They used their lathis against the students there thinking that they were the stone pelters who took refuge there.

The entire media and judiciary came down heavily on the police, blaming them for entering a University campus without permission. The fact that the arsonists and stone-pelters took shelter in the University campus was ignored. A few days later, there was a fracas in JNU and the police did not intervene because they were not called in by the University administration. The police were again blamed for not doing anything. A major arterial road was blocked at Shaheen Bagh by protesters, largely women. The police did not evict the protesters, possibly fearing that this may lead to injury to the women and children involved. Instead they landed up providing security to the protesters by shielding them from locals who were inconvenienced by the road blockage.

What a travesty; police protecting protesters who were inconveniencing common citizens. Everyone, including the protesters and the judiciary are blaming the police for not taking stern action. Surprising isn’t it?

People will recollect that some time back videos from Srinagar were doing the rounds in which some local youngsters were seen heckling a CRPF jawan walking down the road. The youngsters did everything short of physically abusing the person. What was the response of the administration? They lauded the restraint shown by the soldier, without taking to task the youngsters. What was the message sent down the line to the protectors of law? Simply stated, it indicated to them that they were punching bags and their well-being lay in avoiding any confrontation with law breakers.

In a highly publicized case in early 2018, an Army convoy was attacked by some stone pelters in J&K. The mob nearly lynched the JCO leading the convoy. The troops warned the protesters and when despite the warnings they continued to attack the convoy and injure the soldiers, they opened fire in self-defense killing three civilians. The J&K government lodged a FIR against Major Aditya, who was not even present at the site. Surprisingly, no FIR was lodged against the stone-pelters.  The case was taken to the Supreme Court by the officer’s father, an Army veteran. It is yet to be resolved. The sequence of events sent a message that protesters or law breakers have nothing to fear from the security forces and the state would not take any action against them.

Let’s go back in time a little more. Some years back, the Supreme Court ordered investigations and filing of FIRs against personnel of the Army, Assam Rifles and police for supposedly fake encounters in which some civilians were killed in Manipur during the period of peak insurgency in early 2000. These cases were brought to the court’s notice as PILs by some NGOs and private persons. The investigations under the court’s supervision sought to register FIRs against the local police and Army personnel involved in counter insurgency operations, even when  AFSPA was in force and the state was declared as a disturbed area.

The civilian government had called in the Army because the situation could not be controlled by the police. The case is still going on, even as an appeal by more than 300 Army personnel against the Court’s actions was dismissed. The Court is talking about use of proportionate force. This can be interpreted as implying that soldiers have to wait for the terrorists to fire before responding in kind. What are the messages being conveyed to the law breakers, protesters and terrorists? It is that security forces remain safe only if they do not oppose or stop those violating the law and must not take harsh action against them. The question that needs answering then is who will maintain law and order?

Sad state of affairs indeed. Order and justice are two sides of the same coin. Order can be established without justice, as is the case in authoritarian states. But justice cannot prevail without order in democracies. The priority then has to be to establish order. People need to be reminded that during the early 90s during the peak of the Punjab insurgency, courts had stopped functioning. The lives of the judges were in peril and the courts were dysfunctional. The judiciary only started functioning when order was restored by the police.

Order prevails when the security forces and the police are permitted to do their job without undue interference. When the deterrent effect of these forces gets eroded, law breakers get an opportunity to pursue their devious objectives. When action by the security forces is delayed, simple law and order situations escalate into unmanageable riots and rebellions.

The recent riots in North East Delhi may possibly be a point in case. In most cases, this erosion of the deterrent effect occurs when well-meaning human right activists petition courts, which in turn, out of good intentions rein in or shackle the initiative required by the security forces to tackle extremists. It is about time that everyone becomes aware of the second order consequences of excessive stress on freedom of individuals to do anything they desire, even as the security forces are restrained from performing their duties.

is a former test pilot and has commanded an Attack Helicopter Sqn.  He is a PhD in Defence Studies from Osmnia University.

6 thoughts on “Emasculation of Security Agencies”