Elevating India-Brazil Relations will benefit both 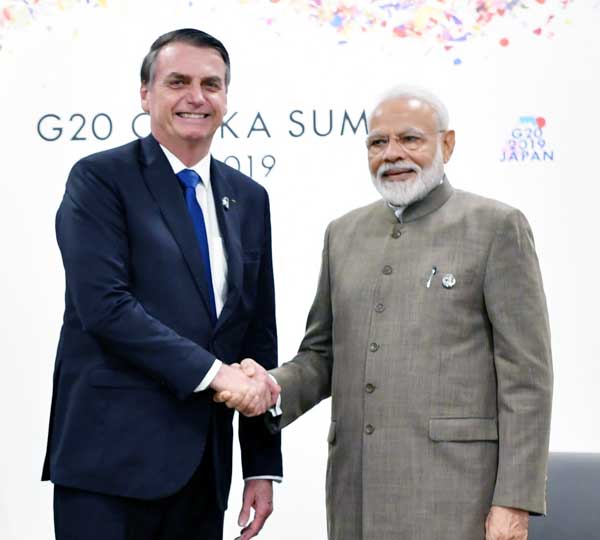 India-Brazil relations date back to the 15th century. On May 20, 1498, Portugal’s Vasco da Gama arrived in Calicut (now Kozikhode) in India with 170 men having sailed from Lisbon on July 8, 1497. Portugal’s Pedro Alvares Cabral who is acclaimed as the first European to have discovered Brazil was sent by the King of Portugal to India after the return of Vasco da Gama. Interestingly in March 2016, thousands of artifacts and nautical remains were recovered from wreck of the ship ‘Esmeralda’ found off the coast of Oman. Esmeralda was part of Vasco da Gama’s armada. Cabral’s armada was blown off course on his way to India but finally he arrived at Calicut on September 13, 1500. Brazil became an important Portugese colony and a stop-over in the journey to Goa. It may be recalled that Portugese invaded Goa in 1510 defeating the Bijapur Sultanate and ruled it for 451 years till the Indian Army liberated it in 1961.

After India gained independence in 1947, diplomatic relations were established between India and Brazil in 1948. The Indian Embassy opened in Rio de Janeiro on May 3, 1948 and later moved to Brasila on August 1, 1971. Brazil had gained independence on September 7, 1822 but the initial years of Indo-Brazilian relations amidst India liberating Portugese enclaves within India and Portugal’s unwillingness to let go were overshadowed by ancient Portugal-Brazil ties. Brazil supported Portugal’s claim over Goa right up to 1961 till the Indian Army took over. Even later, the Brazilian government vehemently criticized India for taking over Goa citing violation of international law. India was deeply disappointed that Brazil, being a democracy and itself a former colony, was supporting Portugal – a monarchy.

India-Brazil relations came under strain again in 2009 when Brazil went ahead to sell 100 x MAR-1 anti-radiation missiles to Pakistan through a deal worth Euro 85 million despite India objecting to the sale.  Brazil’s Defence Minister Nelson Jobim dismissed Indian protests by saying, “Brazil negotiates with Pakistan, not with terrorists. To cancel this deal would be to attribute terrorist activities to the Pakistani Government”. But over the years India-Brazil relations have grown stronger, progressing towards a an eventual strategic partnership. The Preferential Trade Agreement between India And MERCOSUR (trading bloc comprising Brazil, Argentina, Uruguay and Paraguay) was formed in 1991 aimed at facilitating free movement of goods, services, capital and people among the four member countries.

A festival of India was organized in Brazil during the visit of President KR Narayanan in May 1998. The first India, Brazil, South Africa (IBSA) Summit was held in Brasília in September 2006, and has continued since then with the third one at New Delhi in October 2008 covering areas like science, technology, education, agriculture, energy, culture, health, social issues, public administration and revenue administration. The target of $10 in trade was achieved by 2007. Both countries view IBSA a tool to bring economic growth, sustainable development, poverty reduction and regional prosperity in the regions of Latin America, Africa and Asia.

Presently, India and Brazil share close relationship at bilateral level  and multilateral forums like the UN, WTO, UNESCO, BRICS, BASIC, G-20, G-4, IBSA, International Solar Alliance and Biofuture. Bilateral relations are based on a common global vision, shared democratic values, and a commitment to foster economic growth with social inclusion for the welfare of the people of both countries. Political relations became stronger with Prime Minister NarendraModi and Brazilian President Michel Temer meeting at the 8th BRICS Summit in October 2016 in Goa. On October 17, 2016, three MoUs were signed during the visit of President Temer to India: cooperation in Genetic Resources, Agriculture, Animal Husbandry, Natural Resources and Fisheries; cooperation in Zebu Cattle Genomics and Assisted Reproductive Technologies, and; cooperation in pharmaceutical production regulation.

Brazil and India signed a defence cooperation agreement in 2003 which was ratified by Brazil in 2006. This agreement calls for cooperation in defence related matters, especially in the field of Research and Development, acquisition and logistic support between the two countries. Defence Wing was established in the Embassy of India, Brasilia on 24 December 2007 and Brazil opened its Defence Wing in the Embassy of Brazil, New Delhi on 14 April 2009. Periodic  Joint Defence Committee meetings are being held under  Article 3 of the Defence Cooperation Agreement.

India is providing training to Brazillians under the Indian Technical and Economic Cooperation Program (ITEC), which is a bilateral assistance program run by the Government of India. Scores of Brazilians have availed training in communications, management, defence etc under the ITEC Program, which is gaining popularity amongst Brazilians. The Indian community of PIOs/NRIs in Brazil is small (around 4700 only), mainly comprises professionals, businessmen and some scientists/researchers in space, agriculture, physics and biotechnology, with majority of them living in Sao Paulo, Rio de Janeiro and Manaus. There is an Indian Association in Sao Paulo.

Unlike India, Brazil does not face a terrorism threat directly from Pakistan but on July 21, 2016, two weeks before the scheduled start of the Olympic Games in Rio, Brazil’s Fedral Police busted an Islamic jihadist terrorist ring plotting to wreak havoc in a manner similar to the 1972 Munich massacre. 10 people suspected to be allied with ISIS were arrested and two more went underground. On 2 May 2017, Palestinian migrants threw a bomb at far-right protesters, leaving several injured in Sao Paolo. Significantly on September 6, 2018, Jair Bolsonaro, then presidential candidate (now President) was was stabbed during a political campaign in Juiz de Fora, Minas Gerais. Perhaps time has come for a joint India-Brazil exercise for countering terrorism.

The visions of India and Brazil converge on global issues and there are no disagreements. Both countries are for economic growth, sustainable development, poverty reduction and prosperity. In addition to being Chief Guest for Republic Day celebratons 2020, President  Jair Bolsonaro’s visit should serve in elevating the India-Brazil relationship to the next level.

One thought on “Elevating India-Brazil Relations will benefit both”