Economic and Strategic Importance of Sea in Modern Indian Context 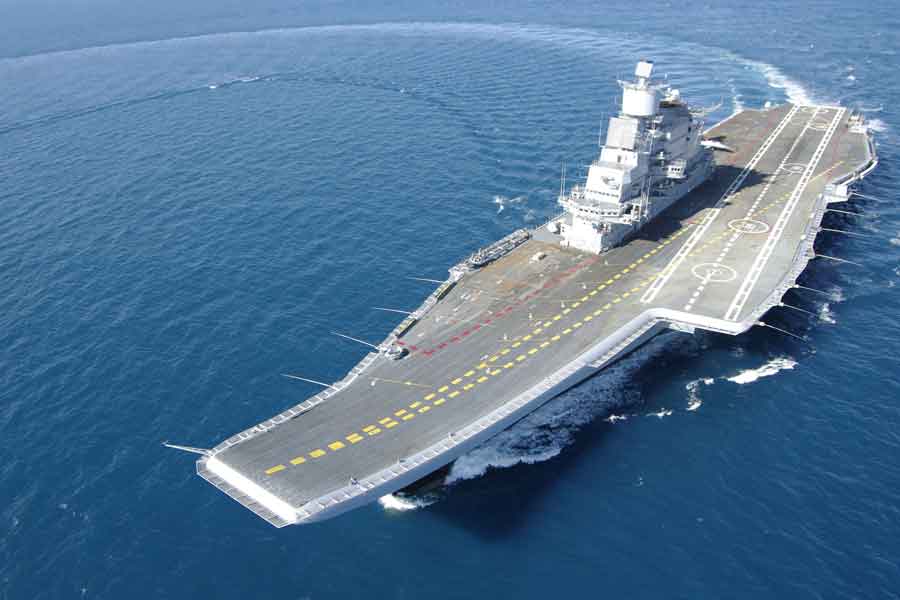 Pandit Jawaharlal Nehru was very perceptive in stating that “By and large it can be said that even in the past and remote ages, it was the seafaring nations that prospered, prospered both from point of view of power and wealth because of trade and commerce.

It is often forgotten that, India has always been a sea faring nation and its wealth in the ancient times was due to its trade across the oceans. Indian mariners had mastered the sea …

Global economic growth has always been linked to trade, generating employment, wealth and as a result enhancing overall living standards of people. Seaborne trade has been a vital component of world trade through ages, since it has been the cheapest mode of transport for conveying large volumes of cargo over long distances. In the modern era, bulk of the energy needs of nations, such as oil and LNG has always been transported through sea. Pandit Jawaharlal Nehru, independent India’s first Prime Minister was very perceptive in stating that “By and large it can be said that even in the past and remote ages, it was the seafaring nations that prospered, prospered both from point of view of power and wealth because of trade and commerce. I do not say that landlocked nations have not been powerful, they certainly have been powerful for periods at a time, but on the whole the importance of sea power has been a dominant feature of history”.

It is often forgotten that, India has always been a sea faring nation and its wealth in the ancient times was due to its trade across the oceans. Indian mariners had mastered the sea and had regular voyages to ports in the Red Sea, Mediterranean and South East Asia for trade and commerce. Of course Indian culture and knowledge was also carried across the oceans, more so to Sri Lanka and South East Asian nations. Ancient Indian kingdoms such as the Mauryas, Pallavas, Satvahanas, Sri Vijayas and Cholas, all had powerful navies. Kautilya in his Arthashastra, amplifies the duties of Chief Controller of shipping and ports, implying the importance of maritime trade during the Mauryan Era. KM Pannikar, who in the 1940s wrote his seminal work “India and the Indian Ocean”, brings out that in ancient times Indian ocean was extensively used for commercial activities as well as for cultural exchanges. He also established that even ancient civilizations such as those of the Indus Valley made extensive use of the seas. It was the decline of India’s sea power with the arrival of the Mughals that eventually resulted in domination of Indian Ocean by European powers leading to subjugation of India.

Geostrategic significance of the seas can be gauged by the fact that 70 percent of the earth is covered by sea. Nearly two third of the population lives within 100 miles from the coast and 150 out of 192 member states of the United Nation are coastal states. 80 percent of the cities of the world and nearly all major trade/financial centres are located on the coast. Past few decades have seen liberalisation across the world, leading to closer cooperation between nations in manufacturing, trade and capital flows, resulting in enhanced economic interdependence.

Indian Ocean region has nearly 33 percent of the world’s population and accounts for 50 percent of world maritime trade.

Development of newer technologies in communications and transportation has also enhanced trade, which would only increase further, as more developing nations try to leverage globalisation. Shipping still remains the cheapest form of transportation of cargo. Global maritime trade therefore accounts for 80 percent of the world trade by volume and 70 percent by value. More than 52000 ships estimated at $450 billion ply the ocean routes and generate nearly 14 million jobs. The total trade across the oceans considering imports and exports are estimated at $25,000 billion. Apart from transportation, the oceans are also a major source of food (fishing), metals, minerals and energy resources. As natural resources on land deplete and cheaper technologies emerge for extraction of resources from deep sea, importance of seas would grow further. 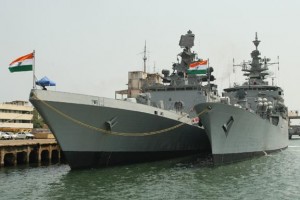 As evident from its geographical location, India is a maritime nation with a coastline of over 7500km, with nine States and four Union Territories along the coast. It has 1208 island territories and an Exclusive Economic Zone (EEZ) of 2.2 million sq.km. India has also been allotted by the International Seabed Authority (ISA) an area of 1.5 lakh sq.km in the Indian Ocean for exploitation of seabed resources. India also has established interests in Antarctica.

Fishing is a major economic activity undertaken by India in the Seas around it. 2.5 lakh vessels of various kinds are deployed on fishing activities, employing nearly 15million people directly or indirectly. In addition providing staple food to millions across the country, it also earns foreign exchange close to $6 billion. India is also prospecting for oil and natural gas in its EEZ. Nearly 20 percent of petroleum needs of India are extracted off shore. India has also been prospecting for oil in far flung corners of the world, extending her maritime interests beyond Indian Ocean into the Pacific and Atlantic regions. Like other countries, as resources on land reduce and with improvement of technology, India too will be looking to exploit its EEZ and the area allocated by ISA for poly-metallic nodules and other resources.

Bulk of India’s trade is through sea and amounts to 90 percent of trade by volume and 70 percent by value. Value of Indian exports by sea is worth $298 billion and imports are worth $447 billion. A major part of the imports is crude oil and LNG, to meet energy needs of the nation. As the Indian economy and industry grows further, its energy needs would also grow. Indian shipping, ports and supporting industries would therefore play a pivotal role in India’s future economic growth. It will thus be clear that Seas have a significant role in India’s economic and strategic wellbeing.

Ensuring security of Sea Lanes of Communications (SLOC) to enable, unhindered movement of ships and cargo is therefore the primary challenge before the world community in view of globalisation. Trade is however only one element of use of seas. It is also a major repository of living and non-living resources. Oceans also have a significant role in preserving the environment we live in. Hence apart from security aspects there is also the need to consider management of resources and environment. Threats in the maritime arena could emerge due to conflicts between nation states in the region or due to economic and political instability in littoral states affecting trade, shipping and other maritime activities. Terrorism and trans- national crimes such as drug and weapons smuggling, human trafficking and piracy could also have similar impact on maritime activities. Proliferation of weapons of mass destruction and natural disasters are other issues that could have a catastrophic impact on all maritime activities and the environment as such.

It would be evident that no nation however powerful or rich would have the resources to meet all the above tasks alone. Globalised economy has further enhanced interdependence of nations. Oceans have often been referred to as common heritage of mankind. Therefore cooperation between all stake holder nations to ensure peace and stability in the seas is essential to safeguard common maritime interests and in furthering human development. Trust and confidence between nations is essential to ensure cooperative security. Confidence building could begin in the form of bilateral and multilateral dialogues and conferences which could be followed up with exercises between Maritime Forces of nations. High level contacts and regular meetings among political and military leaders of countries could further institutionalise the process and sustain continuity.

India as a maritime nation has its economic and strategic interests closely linked to the seas. Its geographic position enables it to strategically influence not only its own economic growth but also those of many other nations in the Indo-Pacific region. India’s maritime strategy therefore should be one encompassing all maritime activities to safeguard her military, economic, commercial, scientific and political interests. Her maritime forces, the Navy and the Coast Guard therefore need to be developed to support such a strategy. Even though the need of the hour is cooperative security, unless one has sufficient force levels and economic strength, one may be compelled to compromise national interests. India has over the years pursued the policy of strengthening its military power and more so her naval forces to develop into a blue water force capable of operating over long distances deep into the Pacific as well as the Atlantic oceans. India has also been leveraging international cooperation in maritime area by participating and conducting bilateral and multilateral dialogues and symposiums. The Indian Navy and Indian Coast Guard have also been regularly exercising with maritime forces of other nations to enhance inter-operability and confidence building. Prime Minister Dr Manmohan Singh, while commissioning the Indian Naval Academy in January 2009, summed the issue by saying that “Naval power is not just about war fighting but also about diplomacy, commerce and energy security among other things.” 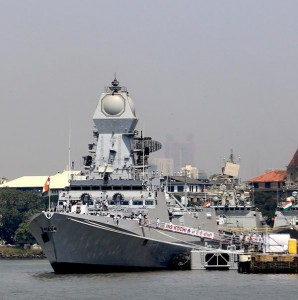 India is and will remain a maritime nation. Its prosperity and development is intrinsically linked to the seas. India is also well placed to take the lead in coordinating bilateral and multilateral arrangements to ensure maritime security to safeguard her national interests. India’s linkage with seas was aptly put by Prime Minister Jawaharlal Nehru, while sailing on board Indian Naval ship Mysore in 1958. He said “And from this ship, I looked at India and thought of the country and its geographical situation. On three sides of it there is sea and on the fourth high mountains. In a sense, our country may be set to be in the very lap of the oceans. In these circumstances, I pondered over our close links with the sea and how the sea has brought us together. From time immemorial people of India had very intimate connections with the sea. They had trade with other countries and had also built ships. Later the country became weak. Now that we are free, we have once again realised the importance of the sea. We cannot afford to be weak at sea.”

was the first Commandant of Indian Navy Academy at Ezhimala.