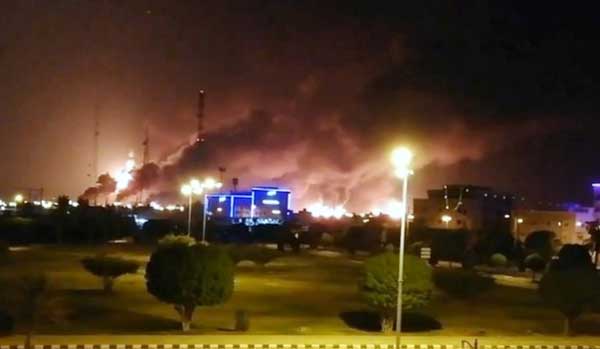 In a continuum of the its attacks designed to hit Saudi Arabia at its most vulnerable, the Houthi rebels carried out a massive drone attack on the strategic Saudi oil facilities at Abqaiq and Khurais, just 50 km. from Bahrain. The attack was reportedly carried out deep inside Saudi Arabia by ten drones. The drones were able to hit the Abqaiq plant, taking out nearly half of Saudi’s oil production – 5% of the global daily output. As of now, it is not clear as to when will Abqaiq be fully operational again.

The moot point is – how did the drones manage to hit a strategic installation well inside Saudi Arabia and near a major US base at Bahrain without being detected and shot down.

Adqaiq is about 1,300 km from the Houthi held Yemen and that makes it just within the reach of Houthis using the long range UAV-X drone. However, the view of most of the defence analysts is that the drones originated from Iran, and not from the Houthis though in either case, the questions raised by the attack are too serious to be caught up in the blame game.

The moot point is – how did the drones manage to hit a strategic installation well inside Saudi Arabia and near a major US base at Bahrain without being detected and shot down.

Saudi Arabia has one of the most extensive air defence networks in the Middle East and is supported by a large US presence that includes deployment of the much vaunted Patriot missile system and yet it has been hit repeatedly by the Houthis. Before the latest drone strike, the Houthis have been successful in attacking Dammam, the Shaybah oil field and the East-West Pipeline.

As per a report by Al-Jazeera, the drones were carrying not an insignificant quantity of explosives and may have used kinds of munitions were used in this case. The only response of the air defence systems that can be ascertained is the use of anti-aircraft guns – as can been made out in the video available.

It is not as if drones have not been intercepted and shot down by the Saudis earlier. And yet, the failure of both the Saudi and US forces to detect and destroy the drones raises some serious questions.Seenprimarily from the prism of air defence systems and its inability to counter the drone threat, this attack changes the contours of an integrated air defence network.

This incident, if nothing else, brought to fore, the importance of having a layered air defence system including both the active measures like guns and missiles and the passive measures like EW assets

Drones represent the most viable, and economical, option of defeating any technologically advanced military power as they can be used to strike at the very heart of any regime. In this case, it was the Patriots that failed to intercept the drones; earlier, it was the Russian air defences at theRussia’s Khmeimim Air Base in Syria’s Latakia province that has been repeatedly attacked using drones, the last such incident was as late as on September 3. Though the Russians claim to have successfully warded off the drones, the incident in January 2018 when the Russian air base was attacked by thirteen drones is still recent enough to raise concerns of the efficacy of an air defence system relying only on a single air defence weapons system. The Russian were able to shoot down only seven of the thirteen drones with their anti-aircraft missiles and had to fall back on their Electronic Warfare unit to take control of the drones and bring them down.

Also, the recent shooting down of a Chinese Wing Long II UAV by Turkey with its new laser weapon raises the possibility of using hypersonic and laser weapons to counter the drones. As US goes ahead with its efforts to develop and field a battery of Stryker combat vehicles with 50-kilowatt lasers by late FY22, the possibilities to have a proven system to take on the growing threat of drones may well become a reality for US and it’s allies.

Till then, it is a long haul and an anxious time for all air defenders as they look for a way to stop the drones.