Pune-based DRDO has developed an UAV called ‘Netra’ to aid counter-insurgency operations to be inducted into the armed forces by the year-end. Weighing 1.5kg, the Netra is the result of collaboration between ideaForge, a company formed by IIT, Powai alumni and Research and Development Establishment (Engineers) (R&DE) Pune. 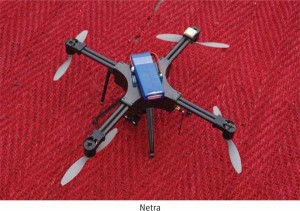 The UAV had been designed for surveillance up to 1.5 km Line of Sight. It has an endurance of 30 minutes of battery charge, comes with a CCD camera with a pan/tilt and zoom capability for wider surveillance and can carry a thermal camera for night operations.

The operational altitude of the UAV is 200 metres maximum, and it has a Capable of Vertical Take-Off and Landing, Netra can climb up to 200 metres and carries a wireless transmitter. Inbuilt fail-safe features allow Netra to return to base on loss of communication or low battery.