The Kargil Conflict had fortuitously brought to the centre-stage the need for an integrated approach towards intelligence gathering and joint operations. The 26//11 Mumbai attack has woken us to the reality of a unified approach between the states, the Coast Guard and the Indian Navy. The Defence Procurement Procedures over the years have tried to bring transparency into our procurement process and there have been some moves towards increasing private sector participation in defence manufacturing. However, unlike the automotives and telecom sector, the relationship between the DPSUs, the DRDO and the private sector remain uneasy and adversarial. The DPSUs still do not consider the private sector as partners but as contractors. The record of private sector players such as L&T in strategic programmes like that of Arihant is salutary. A defence capability improvement would need major structural change. Either we have a DGA-like structure or the COCO structure of the USA with the government providing oversight on strategic issues.

The Kargil War uncovered the fault lines in the coordination between different agencies which are engaged in containing external threats. The Group of Ministers Recommendations (2002) made wide-ranging recommendations to fill up this critical void by providing for an Integrated Defence Services (IDS) Structure, Joint Services operation and creation of an Acquisition Wing. The DPP 2002 was the first definitive document which dealt with the nuances of acquisition by categorising our defence requirements as ‘Buy’ (Import) and ‘Buy and Make’.

The winds of liberalisation wafted through the defence sector (2001) when DPSU monopoly was jettisoned by allowing the private sector to participate fully in defence equipment manufacturing. The foreign Original Equipment Manufacturers (OEMs) were also allowed to bring in Foreign Direct Investment (FDI) up to 26 per cent. DPP 2005 witnessed significant changes by bringing in a ‘Make’ category, and offset provision to leverage our big ticket acquisition to lure foreign suppliers to provide key technology and FDI. DPP 2013 encouraged private sector shipyards to compete for orders for surveillance vessels.

Presently, the Transfer of Technology arrangement provides India the ‘know-how’ rather than the ‘know-why’…

After the UPA government moved into the saddle, the ‘Make in India’ policy has assumed centre-stage by promoting 25 identified sectors. Budget 2015-2016 increased the FDI limit in defence to 49 per cent and the MSME sector financing is being facilitated through the Mudra Bank initiative. In this backdrop, a committee under Dhirendra Singh has given extensive recommendations on measures to restructure our Defence Procurement Policy with a view to synergise the defence industry base with the ‘Make in India’ momentum.

The gravamen of the Committee is to bring the defence sector into the cusp of the unprecedented opportunity that the ‘Make in India’ initiative offers by providing an eco-system where design, R&D, manufacturing, maintenance and export capability would thrive. This would require a proper balancing between importation and indigenous manufacturing, keeping in view our low self-reliance index (30 per cent). The committee brings out the fact that India is the largest arms importer.

Table -1below highlights the details of the level of import and sources of procurement of a few countries.

It can be seen from the table-1 that most of the weapons imported by India and China are sourced from Russia, while in case of Pakistan, they are either of Chinese or American origin. Of late, many of the imports by India clearly show a predilection towards the USA and Israel. It would, therefore, be apt to bring up the level of indigenous defence production in our nine DPSUs and 40 ordnance factories. 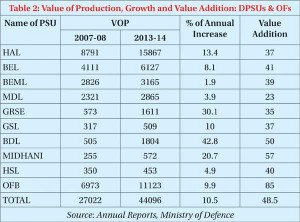 It can be seen from Table 2 that the average increase in the Value of Production (VOP) of Defence PSUs and the ordnance factories is of the order of ten per cent and they contribute nearly $7 billion to defence acquisition. However, they have sizeable import content, barring the ordnance factories. Most of the Defence PSUs also have a very poor record in terms of value addition.

The Committee has observed that for improving our capability we need to climb up the competence ladder i.e. from system integration to component, design and manufacture to system designed development and manufacture. Presently, the Transfer of Technology arrangement provides India the ‘know-how’ rather than the ‘know-why’ resulting in a situation where even for the upgrades, DPSUs such as HAL depend on the collaborator. A case in point is the SU 30 upgrade.

The following table brings out the stages: 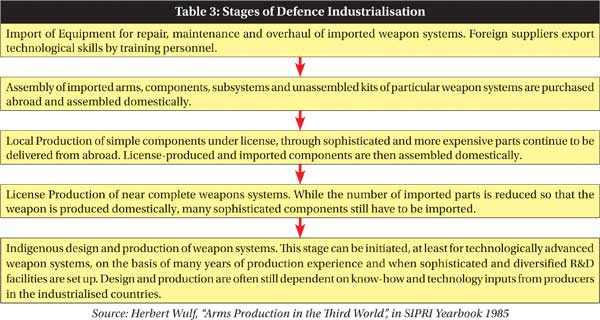 It can be seen from the above flowchart that India is still in the fourth stage. To transit to the last stage we would have to move out from the role of an assembler to that of a value adder where the IPR rights reside with India.

The major thrust of the Dhirendra Committee report is to improve indigenous capability by promoting ‘Buy in India’ and ‘Buy and Make (India)’ option where the indigenous content is sought to be improved from the present level of 30 per cent and 50 per cent (DPP 2013) to 40 per cent and 60 per cent respectively.

The following table would bring out their recommendations with regard to categorisation:

The report gives primacy to ‘Buy (India) Indigenous Designed Developed Manufacturing (IDDM)’. The real difficulty, however, would be how to prioritise between ‘Buy and Make’ (through the Defence PSUs) or and ‘Buy and Make (India)’ where there would be competition for technology transfer between Defence PSUs and the private sector.

A case in point is the ‘Make in India’ initiative for the manufacture of the Kamov helicopter in India where Reliance Industry was bidding for technology transfer from Russia, while the government has opted for HAL. The report suggests strategic partnership models with the private sector as a concept and has referred to US and French investment models where strategic partnership factors in issues such as risk sharing and risk rewards. It also places its thrust on MSMEs, who should be treated on a par with the large corporate organisations. It calls for eschewing suspicion by quoting Mahatma Gandhi, “The moment there is a suspicion about a person’s motive, everything he does becomes tainted.”

It would be interesting to note that the Kelkar committee had strongly recommended that the government should identify a few large corporates such as the Tatas, L&T, Mahindra & Mahindra to be called Raksha Utpadan Ratnas who should be given equal opportunity in the matter of production and integration of major weapons and platforms as the DPSUs. The Dhirendra Committee skirts this suggestion.