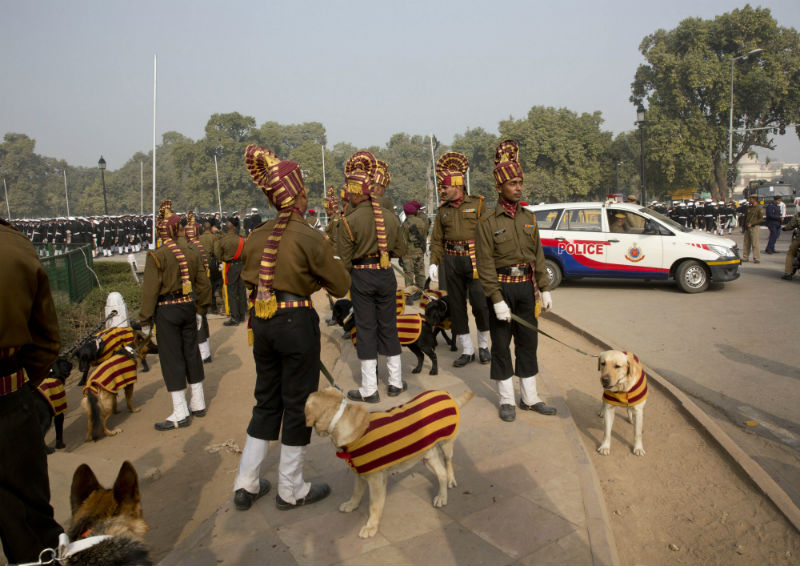 As Indian Army’s 36 Labradors and German Shepherds walked down Raj Path during the Republic Day Parade without missing a step in livery of the Remount Veterinary Corps (RVC), wonder how many in the audience knew  they had been practicing three times a day since the last four months for the parade. Joining the parade 26 years after similar previous participation, their movements were immaculate despite the fact these dogs are trained for combat situations, not ceremonials. Not many would know their contribution to India’s security albeit some may have noticed in the media that avalanche rescue dogs Dot and Misha were part of the massive operation mounted by the Indian Army at Sonam post located in northern glacier at a height exceeding 20,000 feet, post the massive avalanche that buried 10 personnel of 19 Madras under 25-30 feet of ice. They actually are the real ‘Dogs of War’ even as the phrase was used by Shakespeare in Julius Caesar in different context or the Hollywood movie of that name was about a wild pack of soldiers.

Dogs have been integral to the Indian Army ever since but so has been their participation in conflict world over since ancient times; from war dogs trained in combat to use as scouts, trackers, sentries, they have had multiple uses continuing to modern military times. There is mention of war dogs used by the Egyptians, Greeks, Persians, Sarmatians, Baganda, Alans, Slavs, Romans and Britons in ancient times. Dogs find mention during the conquest of Latin America, Spanish wars in the Caribbean and by the English in the Middle Ages. The British used dogs when they attacked the Irish and the Irish in turn used Irish Wolfhounds to attack invading Norman knights on horseback. Two wolfhounds, or even a single one were often capable of taking a mounted man in armor off his horse, where the lightly armed handler would finish him off as necessary.

During World War I, the American Sanitary Corps used dogs to locate wounded soldiers. The two world wars saw use of dogs to detect mines, explosives, booby traps, as also locate camouflaged enemy snipers, in addition to using them as messengers. But it was the Soviets who in World War I used dogs effectively as anti-tank weapons, with explosives strapped to their backs. Anti-tank dogs were used extensively by the Soviets during 1941–1942 against the German tanks on the eastern front in World War II. According to reports, some 40,000 dogs were deployed by the Soviet Army, mostly for anti-tank operations.

The results were mixed but at least some 300 German tanks were crippled or destroyed by dogs of the Soviet Army. The technique perfected was that hungry dogs with explosives strapped on their back were set upon moving tanks (with gradually increasing speed) which carried food for the dogs. This led dogs to jump on to moving tanks. In actual operations, the explosive strapped on the back of the dog was of the variety that exploded on impact.

The Germans resorted to tasking machine guns mounted on armoured vehicles to shoot the Soviet anti-tank dogs but this was largely ineffective because fast moving dogs with their low silhouette and the dust rising in the manoeuvre battle made it difficult for the machine-gunners to spot the dogs.

In modern times, US Special Forces (USSF) and Navy Seals are known to have used dogs extensively in combat especially in Iraq and Afghanistan, with both the dog and the handler also trained to parachute down into the conflict zone. During the raid to kill Osama-bin-Laden in 2011, US Navy’s Seal Team 6 used a dog named Cairo.

There have also been reports of insurgents in Iraq using dogs with explosives during initial phase of the Iraq War. US too had experimented with war dogs in 1943; US Army dogs called ‘Demolition Wolves’ were trained to enter enemy bunkers with explosives strapped on their backs on lines of the Soviets but the experiment did not succeed as dogs went haywire under actual fire, some backtracking.

However, in late 1940’s the Viet Minh used anti-tank dogs during fighting in Indo-China. There are also reports of the Japanese Army running a number of dog training schools for training dogs in demolitions in the past. Approximately 5,000 US war dogs served in the Vietnam War and the dog units called K9 Units were estimated to have saved over 10,000 human lives. Some 232 US Army dogs and 295 handlers were killed in action in Vietnam.

The dedication and bravery of Indian Army dogs can be gauged from the fact that the RVC is decorated with one Shaurya Chakra and some 150 Commendation Cards. Our war dogs have done a sterling job in counter insurgency operation in J&K, northeast and the Maoists belt, RVC having trained scores of dogs for security forces operating in the latter insurgency region.

Special qualities of sniffing, hearing, seeing in the dark and loyalty to the trainer make dogs natural to warfare tactics especially in sub-conventional warfare. War dogs have done an admiral task in recovery of mines, munitions, IEDs, patrolling and in search and rescue missions. Rex, a golden Labrador serving with 14 Army Dog Unit of Delta Force in J&K performed magnificently. In 1995, Rex tracked an injured terrorist for over three kms under intense exchange of fire, recovering an AK 56 rifle and 92 rounds of ammunition. Again in 1998, Rex tracked an injured terrorist after an intense encounter over mountainous terrain and traced him to a cave. He was decorated with GOC-in-C Commendation Card for his outstanding and exemplary performance against terrorists. Unfortunately, he succumbed to serious intestinal injuries he suffered during a fall in 1999.

In August 2011, a four-year old Labrador named Mansi and her handler Bashir Ahmad War (trained by RVC) and serving in a Territorial Army unit lost their lives while foiling the bid of Pakistani terrorists to cross over the LoC in Kupwara area of north Kashmir. Bashir Ahmad’s family recalled that they both were so close that Bashir treated Mansi as his own child. When a war dog is injured on the battlefield, the army jumps into action in much the same way as it would do in case of an injured soldier. Mansi and Bashir Ahmad losing their lives in the same operation showed how much they cared for one another.

But it is not the RVC trained war dogs alone that have supported the Indian Army. Local dogs with a little training have performed magnificently as well. If Soviets trained anti-tank dogs, ‘Pisti’ a local dog in southern glacier of the Saltoro Range was trained to carry mail and critical food stuff to a winter cut off post. They were actually a pair “Pista and Pisti’ but Pisti was trained for this particular task. Her training was done in summer, where she was let off from the mother post but got her meals only at the winter cut off post after which she was to backtrack. She carried on with this routine with mail and other essentials strapped to her back throughout winter as required while the post was cut off with heavy snows, receiving a special morsel she liked on completion of every task.

This carried on for many winters till an enemy stray bullet unfortunately killed her. Then there was this massive Himalayan Mastiff, the size of a small mountain horse, on a post in Central Glacier. His name was ‘Kambal’ (meaning Blanket) because you could not see any part of his body including his eyes because of the thick blanket of hair he had. Kambal was  exceptionally sharp accompanying each and every patrol till the link point and back, moving like a wraith over heavy snows.

There are many more similar examples of dogs guiding patrols in conditions of whiteout in the Siachen glacier and other regions of J&K plus most significantly in avalanche rescue missions. An avalanche rescue war dog and his trainer carried in a Cheetah helicopter can quickly arrive at the scene of the avalanche anywhere.

The Indian Army has been using dogs (both RVC trained locally trained by the Army) also for guarding installations. At a time when security of military installations are under lens post the terrorist attack on the Pathankot IAF base, we should examine deployment of war dogs as well, who perhaps are the most effective in compensating for human surveillance, enhancement of technical surveillance by itself not being foolproof.

France had used dogs to guard naval installations in yesteryears and during the Cold War US military used sentry dog teams outside of nuclear weapons storage areas, but we could take a cue from the US. The US Air Force (USAF) had deployed 1600 dogs on its bases worldwide. US forces in Vietnam created large dog sections at USAF Southeast Asia (SEA) bases. 467 dogs were eventually assigned to multiple bases in Vietnam and within a year of deployment, attacks on several bases had been stopped when the enemy forces were detected by dog teams. Captured Vietcong disclosed they were particularly scared of dogs. Over the years because of personnel cuts, the number of dogs in the USAF has gone down to 530 but the fact remains that they continue using dogs despite access to all the state-of-the-art technology. War dogs will continue to perform tasks like sentries, trackers, sniffers, avalanche rescue and the like. But we need to acknowledge the support these silent warriors can provide especially in an environment of enlarging sub-conventional conflict and in face of growing threats to our national security.

4 thoughts on “Dogs of War”