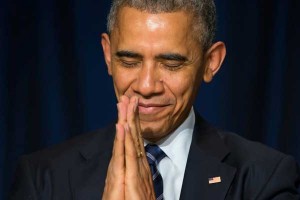 When it was announced that President Barack Obama and the Dalai Lama were both going to attend the US National Prayer Breakfast, an annual ‘religious’ gathering held in Washington, Beijing went berserk.

The White House had taken care to clarify that ‘no specific meeting with the Dalai Lama’ was scheduled; the President only expressed his strong support for Tibetan culture (a very diplomatic term).

It was then not clear if the President and the monk would meet face to face; the Chinese authorities were nevertheless already ‘mad’; The Global Times thundered: “In whatever form and on whatever occasion, should a president of the United States meet with the Dalai Lama, it will unquestionably step on China’s toes and therefore cast a shadow over US-China relations. This should be clear to all US politicians.”

The English mouthpiece of the Party angrily added: “So Washington seems to play a political gimmick by inviting the Dalai Lama …but whatever the reason, Obama is acquiescing to the Dalai Lama’s attempt to split Tibet from China.”

The English mouthpiece of the Party angrily added: “So Washington seems to play a political gimmick by inviting the Dalai Lama …We have no idea whether it was the US president’s idea to invite him …but whatever the reason, Obama is acquiescing to the Dalai Lama’s attempt to split Tibet from China.”

Does Obama really want to ‘split’ China? It is doubtful.

Beijing explained that the reason for the Dalai Lama’s flight from ‘China’s Tibet’ in 1959 was because he had failed to maintain serfdom on the Roof of the World: “the majority of Tibetans were slaves leading a life of unimaginable misery.”

Unfortunately for Beijing, sixty-five years later, not only the ex-serfs, but also the ‘ethnic’ (read Tibetans) Communist Party’s cadres are still deeply unhappy to have been ‘liberated’. It explains why the Party’s Central Commission for Discipline Inspection recently decided to punish Party officials who ‘take an ambiguous attitude’ and are colluding with separatist organizations.

Tibetans with relatives in India are clearly targeted by this edict.

Xinhua also reported that the regional government in Lhasa will offer up to 300,000 yuan (48,000 US $) “to whistle blowers with clues concerning violent terror attacks in a move to promote stability in the region”.

The news agency quoted a document published by the infamous Public Security Bureau (secret police): “the reward will cover tip-offs on overseas terrorist organizations and their members’ activities inside China, the spreading of religious extremism, terror related propaganda, those producing, selling and owning weapons, activities that help terrorists cross national borders [read India] and terror activities via the Internet.”

…Chinese leaders warn the White House against granting the Dalai Lama a public audience, and the American president either ignores the threats of diplomatic fallout or finds a way to hold a meeting…

Obama went ahead with the ‘prayer meeting’, though he was warned: “some politicians in the US …have even gone so far as to echo his calls for an ‘independent Tibet’. Obama should not be that unwise.”

Andrew Jacobs of The New York Times saw the situation in a realistic manner: “China and the United States have worked out a reliable pas de deux over the Dalai Lama …It goes like this: Chinese leaders warn the White House against granting the Dalai Lama a public audience, and the American president either ignores the threats of diplomatic fallout or finds a way to hold a meeting that will result in the least offense to Beijing.”

So, Obama did ‘namaste’ to the Tibetan leader, waved and even smiled at him; later in his speech, he called him ‘his good friend’, a ‘powerful example of what it means to practice compassion … one who inspired us to speak up for the freedom and dignity of all human beings’.

The ‘T’ word was not pronounced, thanks to the White House’s good drafters.

Xinhua also played its role perfectly: “This action by the U.S. to drive a nail into the hearts of the Chinese people is harmful to the political trust between the two countries.”

At the same time, The China Daily tempered China’s pain: “US President Barack Obama acknowledged the Dalai Lama but did not meet directly with him at a religious event in Washington.”

It would be wrong to conclude that the US is a great defender of Human Rights and religious freedom and that the Tibetans will now receive some vital support from Washington. Obama’s public posturing is clearly for internal public consumption.

So were his remarks about India; he stated that “Acts of intolerance [in India] that would have shocked Gandhiji.” He added that India is “a place where, in past years, religious faiths of all types have, on occasion, been targeted by other peoples of faith, simply due to their heritage and their beliefs.”

Xinhua may call the US a ‘troublemaker’ interfering with China’s internal affairs in order to ‘contain, separate and Westernize’ the Middle Kingdom, but business will continue as usual …after a few days.

Where was Obama’s great understanding of India and the newly found Indo-US friendship?

Whether at Siri Fort, where President Obama preached: “India will succeed so long as it is not splintered along the lines of religious faith,” or in Washington, his ‘rebuff’ of India (and also China) is required for his public image.

Union Finance Minister Arun Jaitley rightly said: “Aberrations don’t alter India’s history of tolerance,” he pointed out to the great example of India’s tolerance sitting next to President Obama: “That is His Holiness the Dalai Lama. It is part of that tolerance that he found it comfortable [to stay in India since 1959].”

The Times of India termed Obama’s speech ‘an embarrassing smack down’ for a country where he was received ‘with euphoria’ a few days earlier.

For Tibet, it is even sadder. It reminds me of another sad story: in the autumn of 1991, John Major, the British Prime Minister went to Beijing; he was the first Western leader to visit China after the Tiananmen events. Before leaving, Major had told the media that he would present to the Chinese leadership, a list of several hundred political prisoners prepared by Amnesty International. After meeting Premier Li Peng, Major confirmed that he had passed on the list to his Chinese counterpart; everyone praised Major’s moral courage. Later on, one of the British officials who attended the meet, admitted that Major had never shown the list to Li Peng, nor had he spoken a word about human rights; he had plainly lied.

Business was already business; it still is today.

Xinhua may call the US a ‘troublemaker’ interfering with China’s internal affairs in order to ‘contain, separate and Westernize’ the Middle Kingdom, but business will continue as usual …after a few days.

A commentator compared the present high drama to the Cham ritual dance of Tibet where different characters played different roles in a script written centuries ago (by an Indian sage). Despite the high tempo, Cham always ends up the same way.

Nothing has changed since Tibet was so-called liberated in 1950. And neither Beijing nor Washington seems interested to find a remedy to the depressing situation.

I discovered this when I wrote my book, “The Negotiations that never were”, on the fruitless talks between Beijing in Dharamsala.

In the meantime, the Tibetan Centre for Human Rights and Democracy, an NGO based in Dharamsala published last week the report affirming: “In 2014, the human rights situation in Tibet continued to deteriorate. Human rights violations continued …The PRC cracked down against Tibetans in response to mining protests, protests against forced displays of loyalty, religious practices, and the continuation of the self-immolations protests.”

Nothing has changed since Tibet was so-called liberated in 1950.

And neither Beijing nor Washington seems interested to find a remedy to the depressing situation.

By the way, a couple of days after the famous Prayer Breakfast, Xinhua announced that President Xi will visit Washington later this year.