Home  >  News  > Geopolitics  >  Does India Have a Viable Plan ‘B’ Against Pakistan?

Does India Have a Viable Plan ‘B’ Against Pakistan? 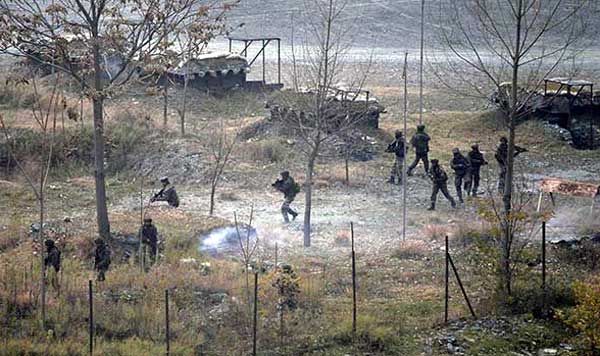 Ever since the early 1940s, the erstwhile Muslim League Party which colluded with the British Rulers during the grim period of WW II to ensure its political resuscitation and gain the benefits of colonial patronage, and its successors in Pakistan, had been carrying out the poisonous propaganda that only they have the ‘right’ to rule over this Subcontinent after the British leave, whatever be the type of Govt that gets established. This anti-‘Hind’ concept corrupted the minds of the people in those Provinces where the Muslims were in majority.

Led by the boorish and armed Muslim League National Guard cadres, they created the theocratic State of Pakistan by driving out the 20% minority Hindu and Sikh population who had lived there for millenniums. This is the largest recorded ‘land-grab’ and ‘property grab’ in history, driven purely by avarice, and involved unpardonable acts of ethnic cleansing, which took place right under the nose of the calculating and till then all powerful British rulers, who were departing.

The British political and colonial elite gave tacit support to the ‘Two Nations’ Theory, as they did not wish to see a strong democratically ruled nation emerge in the Indian Subcontinent to rival China! The Muslims of North India were the worst sufferers of British retribution after the 1857 Indian War of Independence, yet after the 20th century emerged, the British successfully cultivated the Muslims elite to their side by promising them disproportionate share of devolved power and un-equal rights.

Enticed, the Muslim masses conveniently forgot their common homeland with the rest of Indians and swung in favour of “exclusivism”. ‘Pakistan’ was handed over a platter to the Muslim League by the British Govt, without any of their leaders spending time in jails for participating in the freedom struggle! Like most other Muslim majority States, Pakistan has evolved as a violent Nation State which would favour any Power Bloc only for matters of convenience for military and monetary support, to wage their consistent anti India armed campaigns and Wars, even using proxies. The hostility embedded within the Pakistan Army towards India is real, even though it had emerged out of the united British Indian Army.

Such is the power of religion to ignite hatred and intolerance towards others, when those who profess it are in the saddle and they want to divert the attention of the people from economic and livelihood issues. We have to understand that the Pakistan Armed Forces is powerful internally and has to be reckoned with externally. They fear erosion of their importance if lasting peace is brought about between Pakistan and India. Therefore this Subcontinent has to be kept on the boil year after year, whatever be the treaties the Govts of both countries sign, out of shared wisdom and vision of the political leaderships. This permanent dichotomy has to be accepted by our Policy and Strategic Planners while dealing with Pakistan. Only workable and verifiable solutions should be attempted, based on enforceable military strength – as nothing else fits the Game.

The Pakistan we see and the Pakistan we meet are two different entities, due to their strong belief that India should not gain in any way whatsoever!

When OP PARAKRAM Deployment was ordered in Dec 2001, the Indian Army baulked at the prospect of All Out War with Pakistan! The advantage was definitely on our side for the first eight days as the Pakistanis were badly demoralised and many Units were prepared to vacate their positions rather than face the onslaught of the Indian Army’s formidable mechanised columns, if unleashed across the border. But ultimately wiser counsels prevailed and the scenario of India winning a War with Pakistan, which involved the use of nuclear weapons by a desperate Pakistani military leadership was well avoided. Why go for a ‘Peace’ after the War which is worse than the ‘Stalemate’ conditions existing before the War? It would have been a Pyrrhic victory at best, with adverse international ramifications and interference. Our own logistics weaknesses for attaining “absolute victory” were also glaringly brought to light.

But imagine the future Contingency of fighting a War with Pakistan if there is a grave provocation like ‘Kargil’, below the “Nuclear Thresh-hold Level”. This is a contingency which can potentially boomerang as most threatening to the Pakistani military leadership as neither do they wish to cause the nuclear destruction of Pakistan, nor do they wish to risk the unleashing of the awesome Indian Heavy Breakthrough Forces which is much akin to the Russian War Machine.

Pakistan’s Achilles Heel is the Punjab Heartland. This definitely needs to be threatened by launching shallow pincer moves across the Southern POK region and from our launchpads in Southern Punjab and adjacent areas. As per the particular situational contingency, only the Southern POK Sector may needs to be activated or only the South Punjab Sector or if deemed necessary both these Sectors. Imagine Four Divisional size Secondary Attack Groupings being available with an armoured brigade each and other necessary complements under command, both in the North and South.

The Indian Army has the numbers and capability to muster these Groupings by W plus 4, and this ruthless strategy fits in well with our Cold Start War Doctrine. Main Heavy Breakthrough Forces need to be launched only later, if necessary, as the situation develops. Lt Gen PS Joshi who was the first Chief of Integrated Defence Staff had propagated this operational concept soon after OP PARAKRAM, based on his experience as the Southern Army Commander at that time.

President Zia ul Haq was the most pragmatic military leader that Pakistan has ever produced. He carried out provocative actions against India to the extent that there could be no serious military repercussions. Similarly he extended strategic support to NATO Grouping to foster their cold blooded aim to bleed the Soviet Union, only up to the extent that there was no Soviet military retaliation across the Durand Line.

The Pakistani collaboration was commensurate with the level of military weapons largesse the US was willing to provide in addition to generous financial grants and economic concessions. He completed the nuclearisation of Pakistan right under the nose of the Americans and they had to look the other way! He was an astute ruler in all respects. He completed the process of ‘Islamicization’ of the Pak Armed Forces, so much so that no free thinking leader in Pakistan could ever thereafter advocate the Policy of “Peaceful Co-existence” with India in any form, much less in the military decision making circles. This was why Parvez Musharaff could get away with his “Mad-Hatter’s” Plan to break the Shimla Accord of 1972 and unleash the Kargil Misadventure when he was the Pak Army Chief. This faulty mindset needs to be exploited by India’s strategy making leadership, as Pakistan’s responses are so very predictable.

The Pakistan leadership cannot recover if they suffer initial military debacles. They cannot sense that India’s military planners can seize the initiative if they get the chance, and box them into an “existential quagmire”! For this to happen, the speed of Indian decision-making process should match that of the Israelis when it comes to taking armed pre-emptive actions short of All Out War. Pakistan’s religious bonding is weak and is only sustained by greed and hope for the Pan Islamic World’s support in kind and money. Pakistan’s alliance with China is also ‘unwritten’ and solely decided by China based on its global interests.

The Indian military needs to urgently build up the following assets through “Re-structuring” without going for any increase in its manpower strength. 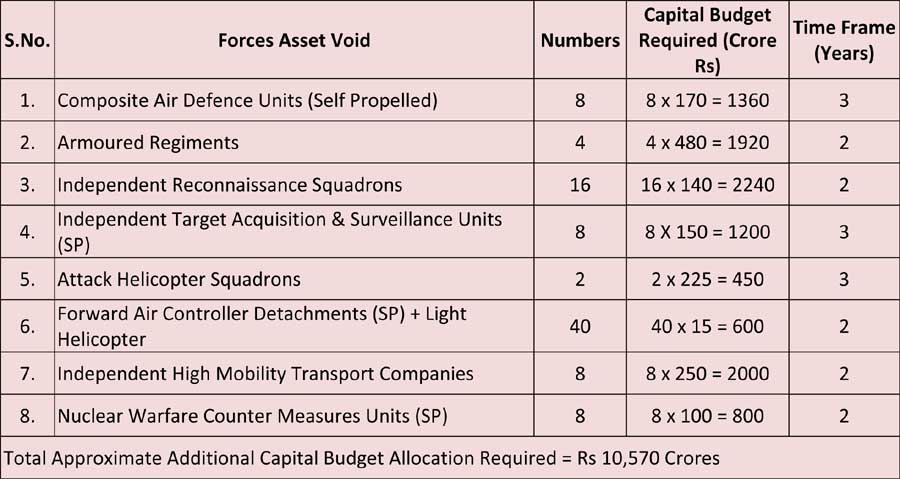 This Forces Capability Build-up Programme needs to be given very urgent National Priority and should become operational by 2021 end. Most of the equipment required can be built indigenously and a challenge should be thrown to the DRDO, OFB and Defence PSUs to deliver the same on time or vacate the space for India’s Private Sector, in order to give a “Boost” to the Make in India efforts in the vital Defence Sector. Bureaucratic Red Tapism within the Ministry of Defence and Ministry of Finance should be ‘silenced’ by using practical accountability measures, and this Limited Forces Capability Build-up Programme should get closely monitored by the Cabinet Committee on Security, on monthly basis.

Where there is a Will there is a Way! The Army’s current Re-structuring Programme will have meaning and Teeth only if simultaneously India’s Plan ‘B’ Strategy regarding military conflict with Pakistan is quickly implemented. This strategy can decrease the chances of  nuclear War occurring in the Indian Subcontinent for the next two decades.

Pakistan military’s misplaced ambitions for keeping on disturbing the peace on the border forever will also get checked. Pakistan Army cannot commit its Strike Corps Assets to thwart these Secondary Shallow Attacks if launched, whereas it cannot also risk launching a Major Attack onto India because of our ‘Self Defence Counter Offensives’ capabilities, dominance of the IAF, geographical Depth and superior Second Strike Nuclear capability.

Our country’s security planners also need to seriously address the requirement of arming the BSF with modern Anti Tank weapons, Heavy Mortars and Anti Aircraft guns like that of Israeli Border Guard Units, in order to shore up their morale and effectively form the ‘trip wire’ of the defensive system on our western borders during the existing “No War – No Peace” scenario. An appropriate and timely reply to stop the non-stop border depredations by the Pak military is the right answer.

We must seriously plan to impose a de-militarised Pakistan after the next War, should it exist.