From the beginning of the new century, the economic environment in India has rapidly improved despite the downturn of the last couple of years and our inability to live up to our potential. With an increasingly assertive and powerful China and a receding US, there has been increasing pressure on India from the US, Japan and the other Asian nations to work in tandem with them to counter the former.

However, a disjointed and poorly executed programme to enhance infrastructure along the Sino-Indian border has left India vulnerable with limited conventional ability to react against Chinese designs especially since infrastructure in Tibet has seen quantum improvement. While attempts are now underway to rectify the situation, it will take time for India to achieve conventional deterrence.

This, along with the inability of the DRDO and the Defence Public Sector Units to keep apace with technological innovations has resulted in the modernisation of the defence forces, already heavily dependent on imported weapon systems and a complex procurement process, being not just adversely impacted but also finding maintaining existing capabilities challenging.

The building up of nuclear capabilities while ensuring the status quo, has not been able to deter Pakistan from a continuation of its low intensity conflict in Kashmir, probably aided by our declared policy of no first use.

However, as we shall discuss later, India’s conventional military advantage has impacted Pakistani strategic thought and led to a decision to introduce tactical nuclear weapons as a counter.

This, along with the attempt to introduce the concept of flexible response, bodes ill for the region and is likely to be a cause of serious de-stabilisation within the region.

From all this we can conclude that prevalent thinking on our national security strategy appears to be based on the following ingredients:

Emerging Nature of Conflict in the 21st Century

High technology with increasing convergence of computers and communications along with the rise of new media have given an immense boost to globalisation and led to an increasingly inter-dependent world community faced with growing economic disparity within society and between nations. Paradoxically, this has led to a gradual decline of State structures as the State has been unable to fully control new media resulting in citizens being instantaneously exposed to vastly differing opinions, ideas and calls to action which the State is unable to contest due to its inherent lack of flexibility and promptness.

This, with a corresponding rise in the influence of ideology based non-state actors is tending to result in political instability and growing fissiparous tendencies within States. Thus, while nations continue to prepare and organise their armed forces to be able to protect their perceived national interests from states inimical to them as in the past, the real challenge today appears to be the necessity of protecting the state from opposition within, whether it be from stand-alone groups or those supported by outside elements, whether those are other nation states or ideology based non–state actors.

While different terminology such as Low Intensity Conflict (LIC), Asymmetric Warfare and Irregular Warfare has been utilised to describe this kind of warfare, probably the most appropriate terminology to understand the emerging nature of conflict would be to refer to it as “Fourth Generation Warfare”, a term first enunciated in the Marine Corps Gazette of October 1989. In this, the authors have theorised on the development of modern warfare in generational terms and suggest that “…while military development is generally a continuous evolutionary process, the modern era has witnessed three watersheds in which change has been dialectically qualitative…. and comprises three distinct generations.”8

While the West evolved based on technology, such as witnessed during the First Gulf War, ideology based non-state actors, as events in Afghanistan, Pakistan, Iraq and Syria show, have challenged Western dominance and shaped conflict in a manner that mere technology is unable to provide the winning edge.

The proponents of fourth generation warfare probably never envisioned that there was a possibility of either high technology-based conventional forces and ideology-based irregular forces working synergistically or of ideology based irregular forces obtaining high technology weapons systems, something that we are now witness to in Iraq/Syria with ISIS and in the Ukraine Pro-Russian separatists. Also, in such situations will technology driven forces that tend to restrict use of full combat power on moral and humanitarian grounds still do so if they continue to face defeat in future?

In the Indian context, the Kargil Conflict was a watershed in defining how future conflict is likely to develop against our adversaries amidst a nuclear backdrop. This conflict clearly showed not only the limitations of a no first use policy with regard to nuclear weapons but also showed how Pakistani nuclear blackmail deterred Indian forces from crossing the LOC to launch punitive attacks. The major lesson that the Pakistani leadership is likely to have learnt is that despite the high costs to its international reputation, “violence, especially as represented by Low Intensity Conflict (LIC), remains the best policy for pressuring India on Kashmir and other disputes.”9

That being said, LIC is likely to be kept to the covert spectrum rather than leading to a limited war as witnessed in Kargil. This is primarily because neither side is in a position to gain dominance and to avoid escalation that could easily result in a nuclear conflagration. In this context in view of skewed ratio in force levels in favour of India, Pakistan is unlikely to initiate conflict in the plains and deserts.

In the Sino-Indian context, the issue of conflict under the shadow of a nuclear threat will ensure that the conflict is limited in time and space despite China’s superiority in conventional forces. Despite this, in the event of a limited border conflict, it does face some very serious difficulties given its extended lines of communication and the level of internal conflict in Tibet.

The raising of the Mountain Strike Corps, repositioning of air assets in the East and increased focus on infrastructure development along the border will enable India to regain conventional deterrence in the near future. Similarly, as India operationalizes its nuclear second strike triad and puts in place capability to target all of China in the next few years, it will act as an added incentive for China to agree on a mutually acceptable border through dialogue and dissuade it from unnecessary adventurism.

Evolution of Current Army Doctrine, Areas of Divergence and their Impact

NATO defines doctrine as, “Fundamental principles by which the military forces guide their actions in support of objectives. It is authoritative but requires judgment in application.”10 To amplify, this then is a formalised guideline that broadly visualizes the nature of the conflict, the preparations required and methods that can be adopted to achieve success. It is, therefore, “an authoritative guide, describing how the army thinks about fighting, not how to fight. As such it attempts to be definitive enough to guide military activity, yet versatile enough to accommodate a wide variety of situations.”11 Strategy, on the other hand, provides the fulcrum on which military doctrine hinges, laying down the broad objectives which the military must aim to achieve, military doctrine must necessarily be very closely aligned to the enunciated national security strategy.

In our context, where strategic objectives have only been inferred it may be fair to state that the difficulty of preparing a military doctrine and the likelihood of it being at odds with our strategic intentions is undoubtedly very high.

As doctrine shapes the military for the role it is required to successfully fulfill, the importance of visualising the existing and future technological environment cannot be overstated. Weapons and equipment profile, force structures and tactics are very closely interlinked and inter-dependent.

While visualising the impact of technological advances in itself may not be too difficult, the complexity of the problem is increased manifold due to such factors as the rapid rate of technological obsolescence and the inevitable time lag that is associated with the R&D and procurement cycle that normally tends to extend over 15 to 20 years on an average.

Even more importantly, once this technology has finally been introduced into the military, it needs to remain in service for another two to three decades to be economically viable and provide an acceptable return on investment apart from issues connected with skills development and training infrastructures.

The American experience in this regard is particularly illustrative and relevant in our context. The end of the Cold War left the United States as the only military power of consequence with relatively weak opponents and the possibility of large scale conventional wars drastically reduced. With the need for ensuring minimal casualties, and a rapid and successful termination of any crisis that required US intervention, the military looked towards its economic and technological edge to achieve its objectives. 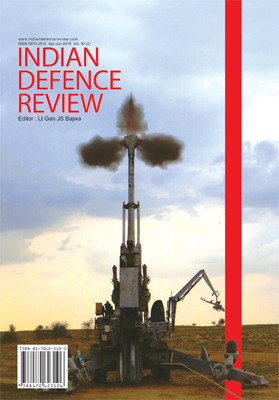 It embraced Revolution in Military Affairs (RMA) and Network Centric Warfare (NCW), based on superior Information and Communication Technologies (ICT), as the cornerstone of what former Secretary of Defense, Donald Rumsfeld, referred to as his “Force Transformation” agenda.

The new form of combat involved the ability to move rapidly over great distances and simultaneously engage the enemy in depth and destroy or severely degrade his command and control elements and destroy his war-fighting capabilities, while avoiding collateral damage.