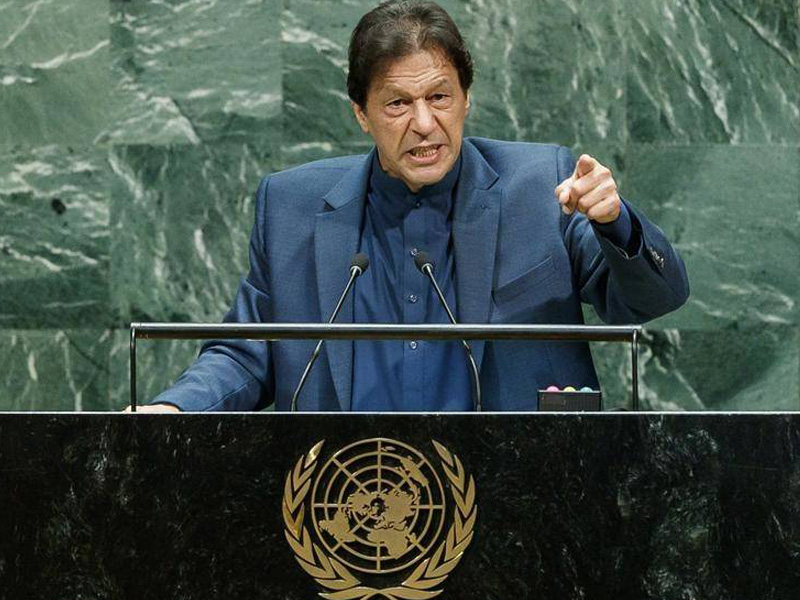 Imran messaged his debut as Pak PM with India-Pak peace rhetoric. Pak army imagined that with a former popular cricketer as the show boy, it can repair its terror-daubed image and pass for a peace-loving country purporting to blunt India’s thrust. New Delhi stood fast by its known stand that talks and terror do not go together. This ended up in Imran’s first frustration as the PM.

The Act 2019 worked a bombshell on Pak military echelons because it was the simmering pot of Kashmir issue that greased Pak army’s fund amassing machine.

Moral bankruptcy made the Pakistan army hide for her people the Balakot pincer strike. However, the new threat perception that has begun to haunt her is the vulnerability of her border with India. Balakot forced the Pak army to recast its border defense strategy. She has moved nearly 200,000 troops and military machine along the PoK border with the Union Territory of Jammu Kashmir. The alarm of Indian forces launching a blitzkrieg on Muzaffarabad is slowly but fatally eating into the vitals of the Pak army. This is its second frustration.

JK Reorganization Act 2019 came as a stunning shock more to Pakistanis and their army than to the Kashmiri separatists and their sympathizers among Indian pseudo-secularists. Pakistan shedding crocodile’s tears for Kashmiris for seven decades and more found to its utter surprise that it had to shed real tears for itself and not for Kashmiris.

The Act 2019 worked a bombshell on Pak military echelons because it was the simmering pot of Kashmir issue that greased Pak army’s fund amassing machine. It will be noted that with the passing of the new Act and reorganization of former J&K State, Pakistan’s Kashmir narrative began to undergo a deep change. Fight for Kashmiris changed into a fight for Islam, to be precise, for Sunni Wahhabi Salafi Islam.

Imran’s first reaction was to downgrade the diplomatic mission of India. Then it went knocking at the door of the Security Council, which, however, proved imbecile. Imran rushed to Washington to open the plethora of complaints in front of President Trump. Responding to media queries, the President said that Imran was a former cricket player and a handsome man. He trivialized the meeting with a hearty laugh. No European power showed any interest in Pak’s tantrum against India’s constitutional amendment.

…frustrations pushed Imran to the most dangerous and self-destructing course of talking about the weapon of mass destruction.

After facing the third frustration, Imran Khan hesitatingly knocked at the door of the OIC. No satisfactory response was available from the Arab world. Saudis said they closely follow the developments in the region and insisted that the issue could be resolved based on international resolutions. Shimla Resolution of 1972 and 2003 Ceasefire Resolution between the parties is among the plethora of resolutions on Kashmir and Pakistan has trampled these under the iron heel. Dubai said a constitutional amendment is nothing extraordinary in a democratic setup and UAE bluntly said it was an internal affair of India.

After getting bruised and mauled by a cold and dispiriting response from the Arab world, Imran found some hope with Turkey’s President Endogen and Malaysian Premier Dr. Mahathir.

Finally, these frustrations pushed Imran to the most dangerous and self-destructing course of talking about the weapon of mass destruction. Imran Khan and some irresponsible members of his Council of Ministers have been issuing threats of being under pressure to think of the use of nuclear alternative. To justify the use of the dirty bomb, Pakistan has been floating absurd rumors she thinks would bring legitimacy to making the first nuclear strike. For example, Pakistan claims that India has broken the wire fencing at least at half a dozen places along the LoC, and deployed nuclear powered Brahmos missiles… Imran has been sending letters to the US and other European governments raising the bogey of an imminent attack by India to wrest the part of J&K illegally under her occupation. This is now a frustration that Pakistan finds difficult to control.

Pakistan declined to participate in the Kuala Lampur Islamic meet because Saudi Arabia summoned Imran to Riyadh and warned him that Pakistan’s participation in Kuala Lampur Islamic Summit would be considered by the Saudis as an act inimical to the interests of the Saudis and the OIC.  Saudis further warned him to desist from creating a wedge between Semitic and non-Semitic Islamic countries as was the plan of anti-Saudi Islamic countries like Turkey, Iran, and Malaysia. The move was jointly initiated by Malaysia, Turkey, Iran, and Pakistan with Malaysia Prime Minister Dr. Mahathir as the prime mover having become an Islamist at 94.

The huge brigades of jihadi terrorist organizations created by the Pakistan army and funded by the state exchequer are the cause of disaster awaiting Pakistan.

The recent visit of the foreign minister of the Saudi Kingdom to Islamabad was interpreted by Pakistani media as Riyadh’s indication to call a meeting of the OIC on Kashmir. Imran Khan knows that OIC is a toothless entity, and the media hype is only to silence the critics at home and put an ointment on his frustration. OIC is a spent force because the Islamic world is divided. Moreover, India has very cordial relations with the Saudi Kingdom to the extent that Saudi Arabia honored PM Modi with that country’s highest civilian award. Saudis are incepting Asia’s largest oil refinery in Mumbai and the two countries trade runs into billions of dollars.

Likewise UAE and Dubai, too, have close relations with India and enormous commercial interests among them.  Two-thirds of India’s oil imports are from Saudi Arabia and millions of Indians are working in the Gulf countries. All this contributes to the frustration of Pakistan. The question is this: Who is at the root of all these frustrations? This is the real question. The huge brigades of jihadi terrorist organizations created by the Pakistan army and funded by the state exchequer are the cause of disaster awaiting Pakistan.

Pakistan has intensified shelling and firing along the border. The entire LoC is ringing with gunfire. Pakistan is desperate that India should react in anger and begin a war so that by playing an oppressed party, she can win the sympathy of the international community. India, on principle, never initiates war anywhere. She will thus disappoint Pakistan.

Pakistan is desperate that India should react in anger and begin a war so that by playing an oppressed party, she can win the sympathy of the international community.

J&K is integrated into the Indian Union. What is under the illegal occupation of Pakistan and China is part of the territory of the Indian Union. The Indian Union has the right and sanction of international law to retake its illegally snatched territory. Therefore, the task before the Union of India after the abrogation of Art… 370, etc. is to first recapture Muzaffarabad and thus seal off the Krishnaganga Valley. Then India will bring about a link up with the Wakhan corridor where there is 116 km long border between Wakhan Arm and Gilgit territory. This provides India a route to Afghanistan and Central Asia.

India has to establish the link because Pakistan’s refusal to India’s over flights westward necessitates the retaliatory action. There is already large scale discontent simmering among the people in Krishnaganga Valley and Gilgit Baltistan region against the tyrannical rule of Pakistan. India will come to the rescue of her people as they are originally the nationals of the Indian Union.

One thought on “Dissection of Pak’s frustration”