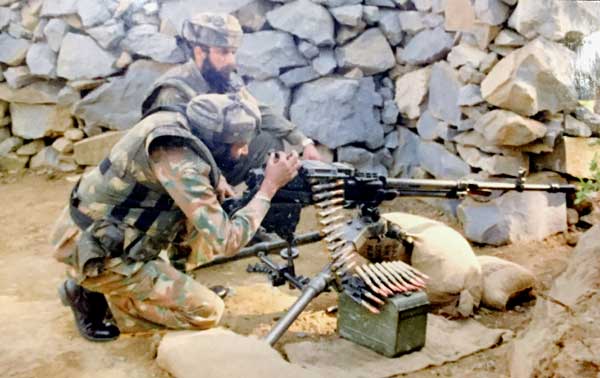 A recent article titled, ‘How new military bases could seed new cities and create jobs’ has appeared recently in the media. It is not known whether the author-scholar is on the payroll of Pakistan’s ISI or of Beijing, or he aims to cash on the greed of politicians to gobble land and make quick buck for themselves, in turn securing for himself a spot in Niti Ayog, NSAB, Adviser to Defence Minister or OSD in PMO. Perhaps he was also egged by Nimala Sithraman, Defence Minister under NDA-II mainly focusing on grabbing defence land and empowering the Defence Estates which CAG had termed the most corrupt part of MoD and recommended its disbandment.

Maybe he is also inspired by the recent elections that show quantum increase in number of lawmakers with criminal cases. Of the total winners in 2019, 233 parliamentarians (43%) have ‘declared’ criminal cases against them as compared to 185 (34%) in the Lok Sabha elected in 2014 and 162 (30%) in 2009. Of course they are only charged and given the pace of our justice system nothing should be expected for many years. Yes, special courts ‘were’ to fix all corruption cases in a 12-month span, but that is a thing of the past. Getting back to the ‘author’, he recommends India creating over 30 million jobs in the short-term and medium-term by creating 20 military bases in the next 15 years.

He wouldn’t dare   comment on the thousands of acres of land lying surplus with the DRDO-OFB and DPSUs because he knows which side the bread is buttered and disturbing the bureaucratic nexus with the governmental defence-industrial empire would land him in trouble. Incidentally, the CISC heading HQ Integrated Defence Staff (IDS) in 2007 when  broached by MoD bureaucrats for taking over defence land for development purposes, had told them why not start with surplus land of DRDO-OFB-DPSUs. That killed the issue but then the mafia hit upon the idea of deep selection in the services, corrupting it with the ‘pliability’ factor based on annual confidential reports by the Intelligence Bureau introduced years back for Brigadiers / equivalent and above, which went to the political party ruling at the centre and showed who can be twisted and how to ensure pliability.

Theoretically, deep selection is good but cases are prepared by the bureaucrats who have their own agenda and lure politicians into how they and their political party can benefit financially and by increasing their vote-banks. To top this, a ‘prospective’ service chief indicating he is all for giving up defence land makes it a win-win situation for himself and the mafia. The mafia has doubly ensured pliability by introducing deep selection even below Service Chiefs level. It is reiterated that deep selection is an excellent concept, provided it is executed in true letter and spirit. The irony is that defence ministers and junior ministers of MoD are without past military experience, while bureaucracy hands over its personal agenda to the next incumbent. As the bureaucrats boast, politicians come and go, but we are there forever.

A Brigadier who had served in TA when appointed MoS (Defence) was told to forget his military service and concentrate on how to keep the three services ‘divided’. Another Army officer who switched to IAS was briefed on his posting to MoD to forget everything else; just concentrate on what procurements are in the pipeline and how much money can be extracted from it. Wonder how many are aware that during Nehru’s funeral, an IB official armed with a pistol was ordered to shadow the Army Chief with orders to shoot him in case of an army coup. With that level of confidence with the Armed Forces, little wonder that the Army’s Technical Support Division (TSD) was shut down in connivance with Army’s ‘pliable’ hierarchy for fear that black deeds of politicians and bureaucrats may get monitored. The adverse effect on cross-border operations was of no consequence – much to the glee of ISI.

Getting back to the author’s strategy, new military bases can form the nucleus (or the catalyst) for new cities, providing high quality living, schooling and working conditions for the Armed Forces community; these will create a growing spiral of economic activity that can create millions of jobs. The suggestion that new military bases can form the nucleus for new cities, indicates the hollowness of the thought process – on one hand cantonments are being moved out because cities have grown around them, and concurrently new cities are to come around nucleus of the relocated military bases? One wonders if he is inspired by the expansion of Gwadar in Pakistan around the PLA encampment.

He cites estimated value of army land in Bengaluru city in the range of ₹3 trillion few years back and value of defence land in five big cities upwards of ₹15 trillion, or 7.5% of GDP. Cantonments and defence land holdings in the next 15 biggest tier-II cities amount to another ₹15 trillion. According to him, equivalent land 40-100km away from the city would be available at a fraction of the cost, allowing the surplus to be used for infrastructure development, housing and defence facilities. So shifting parts of old cantonments to new sites can, in a single move, address many policy challenges: create new cities, provide the armed forces with modern facilities and create mass employment without adding to the nation’s fiscal burden.

He should confer with Verappan Moily who as Chief Minister of Karnataka had similar ideas and suggested to the Army that he could provide alternative land elsewhere but when briefed what it would cost to establish the new cantonment and what would be the years of disruption, withdrew without a whimper. Does this scholar-pundit realize that considerable part of family separation of military personnel is forced because of higher education avenues only in some cantonments or does he or his relative propose to operate educational institutions by encroaching land in new cantonments, as a former defence minister’s spouse is doing? This is just ‘one’ example since he vaunts for improving quality of life of military personnel; so much for his pathetic plank of providing “better infrastructure and modern amenities to the families of both officers and the rank and file”.,

Does he have an iota of the idea about costs of relocating military cantonments? Is his concept of training areas and firing ranges required limited to the jogging machine in his balcony and firing away on his computer? Where does he expect the money for new cantonment would come from? Nirmala Sitharaman as Defence Minister in NDA-II, ensured that proceeds from acquiring defence lands went towards governments’ Consolidated Fund, not the Defence Budget as Army had expected for much needed modernization. He needs to visit Bilaspur in Chhattisgarh to see for himself why the land offered by the State Government ‘two decades back’ for locating the Special Forces Training School and an IAF base has not even been fully acquired as yet and what are the other problems.

While in Chhattisgarh, he should also visit New Raipur; how this city has come up, continues to grow and how many jobs it has / is creating in the process. His suggestion to relocate 20 military bases in five years needs to be viewed in this context.  Suggestion of relocating 20 military basis to provide 30 million jobs should also be viewed in context of Ng Keng Hoo, CEO and President of China’s insurance group AIA telling Indian media recently that China has created 10 million jobs in the insurance sector alone.

The bigger danger is Beijing’s applying its strategy of ‘Deep Coalitions in India; which could group civil society organizations, a narco-mafia, private corporations, individuals, and other components;  implying players at many levels in the systems. Execution is at multi-dimensional levels; all groups operating simultaneously in continuous flow – multiplying, fissioning, then fusing into others, and so on. The Amendment to the foreign currency regulations act has opened the floodgates for foreign influence domination in India and one wonders if this author has been roped in by Beijing to proffer this sweet pill to India’s new government.

Disrupting India Armed Forces for the next few decades suits the collusive anti-India nexus eminently. With Delhi ranked the most polluted cities in the world, wonder why this author doesn’t recommend relocating the national capital which would earn the government trillions of dollars? And what about chopping off 3500 trees to build a VVIP colony to aggravate pollution? Whether the new government will swallow his sweet pill for harvesting quick money by relocating military cantonments remains to be seen given Chinese proficiency in political warfare.