As per open sources of information3, India possesses the following:

If we prioritise their grouping, we can have the following force structure for the Indian Army: 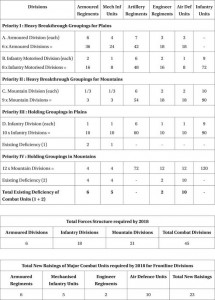 The above is a simplistic calculation to reflect the magnitude of the forces structure problem faced by India at present, if we have to ensure ‘Conventional Forces’ deterrence for ensuring peace, security and the uninterrupted economic surge over the next two decades. The requirement of additional forces and groupings under the Corps HQs has been deliberately left out, for if we embrace the ‘Heavy Breakthrough’ philosophy of operations, sufficient reserves in terms of armoured formations and fire support formations will still be available at the respective Field Army level and infantry formation reserves can be recreated from holding groupings as and when required. There is unmistakably the need for Air Defence cover for Corps Maintenance Areas, strategic command and control centres, which will have to be worked out after meeting the already discussed priority requirements. The actual challenge at hand is how to find 23,000 more troops to raise the 23 New Raising Units (including corresponding logistics support and command echelons) without raising the manpower ceiling of the Army.

A suggested line of thinking is given below: 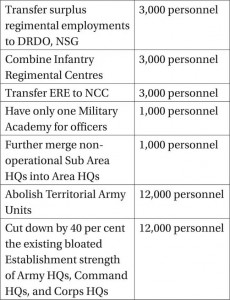 The few surplus Infantry Units and Artillery Units available are required for special tasks under Army HQs arrangements and should not be treated as surplus. There will also be the urgent requirement to raise three more Corps HQs as applicable, in order to control the additional Heavy Breakthrough groupings which are to be created. The ‘thought process’ to carry out the necessary structural and functional modernisation of the Indian Army is even more important and vital, than any urgent need for purchases of new imported weapons platforms to remove the accumulated obsolescence of the Army’s hardware stock.

Simultaneously, a pruning down of the bloated Defence Ministry bureaucracy by at least 25 per cent is recommended, in order to make this organ of the government serve the Armed Forces’ secretarial requirements and coordination with the other Ministries better. Presently, our Defence Ministry’s civilian bureaucracy is several times that of even the US Department of Defence and it is generally perceived that its main function over a period of time has become to slow down the Army’s modernisation programmes. This saving of establishment costs and foreign jaunts can be diverted to more useful purposes. Those who cannot speed up the indigenisation drive and cannot cut down the procurement and R&D cycle time, should not have any secure slots in the scheme of things. Non productive establishments should be shut down and the work outsourced on global tender basis or by giving research grants on the US DARPA model. The post-1962 War fervour should be re-created to enable us to have a fearsome war machine at the nation’s disposal within the next five years time. Merely harking for increase in spending on Defence from the present level of 1.74 per cent of GDP to 2 per cent plus, will not yield the necessary results in terms of optimum output for capital expended, unless there is a winning managerial model that is adopted to implement the pressing Army modernisation drive.

What better example can one quote about the Defence Ministry bureaucracy’s inefficiency, than the 20 years delay caused in modernising the Army’s Artillery Arm, which has gravely jeopardised national security by saving our adversaries from any ‘Self Defence Counter-attack capability’ by India. The same is the case with our Air Defence capabilities, which are no better than they were in 1962. The pounding that the Indian Army got from the Pakistani Air Force in 1965 has not yet been made unimaginable in a future war scenario.

It is true that the good work that our external intelligence agencies do, never gets reported. That is how intelligence agencies perform. Having said this, it is also true that the leaning and expertise of RAW has been on the external political front and has repeatedly been weak on insight into our potential adversaries’ military planning, thinking, clandestine force augmentation and assessment of weaknesses that our military can take advantage of. The hostile policies of both Pakistan and China towards India are ‘military’ driven.

In many ways, Pakistan resembles the erstwhile GDR, solid and efficient military wise and in the skills and achievements of its intelligence agency whereas in real fact, this nation is being corroded from the inside and faces an uphill economic challenge for its existence. This strategic weakness needs to be exploited by using the Pakistan Army to hasten the collapse of governance in that country, and become a victim of its own follies and overconfidence. Pakistan-inspired terrorism should not be confronted by mere retaliatory actions of the same nature. The more serious way of retaliation is to make Pakistan a country teeming with more terrorists than it can manage, who constantly fight amongst themselves for local dominance – which is far easier to obtain than the ‘glories’ of Jihad and martyrdom. Pakistan must be made to sink to the level of Somalia over the next five to six years and get more and more enmeshed in Afghan affairs, which is an ‘incurable’ disease. Only such a policy would force the Pakistan Army to give up its rabid and congenital hatred towards India. The Pakistan Army’s betrayal of Islamic interests can be gauged by its collusion with the Chinese and Iranian intelligence agencies in the suppression of the Uighur population in Xinjiang and the Baloch population of Iran.

RAW needs ‘stiffening’ in order to stand up to the ISI agency’s shenanigans as well as to neutralise the Chinese intelligence Agency’s hold in the trans Himalayan belt. This can be achieved only if up to 40 per cent of all middle level onwards RAW officers including those of the technical cadres are drawn on permanent secondment, after putting in ten years of service in the Army. Alternatively, any officer joining RAW should first be asked to successfully complete a three-year tenure in the Army. If officers from the IPS, Postal Service, IRS and Information Service who get a deputation to RAW with an incentive promotion are able to achieve this much, imagine how much more they would be able to achieve after being baptized in the Indian Army. The existing systems have not made RAW a feared and respected agency in the minds of our country’s enemies. The Mumbai train blasts, hijack of an Indian Airlines plane to Kandhahar, the attack on Hotel Taj in Mumbai and the blast in the Indian Embassy at Kabul need to be avenged with greater severity and subtlety.

The Chinese military intelligence’s capability is grossly underestimated by us, merely because they do not indulge in supporting terrorist actions in India. The Chinese penetration and influence peddling in our border areas is amazing so much so that the population in the border areas have more faith in China. Our Border Areas Development Programme is poorly planned, coordinated, implemented and monitored. Good intelligence always serves the interests of the victor. Ethnicity and religious beliefs should get factored in and exploited in a larger dimension unobtrusively by us, in order to reap effective dividends. Tibet will become even more difficult to control for China than Xinjiang unless an agreement is reached during the Dalai Lama’s lifetime. Chinese image building activities in Nepal also need close monitoring.

Concurrent with the development of heavy breakthrough capability by the Indian Army, trade with our neighbours should get seriously enhanced and encouraged, whatever be the setbacks in other fields and engagements. One only has to examine the level of trade and investments between China and Japan and between China and the US in order to draw the right conclusions. Even if Pakistani cricketers and ghazal singers do not come to India, there should be rail links striding across our border states facilitating movement of goods trains.

There should be all-weather four-lane highways connecting railheads in India and China, especially in our North-East over which border trade and tourism could thrive. The same type of road connectivity should apply to the POK, the Northern areas – Indian J&K state frontiers, across our Jammu, Kashmir and Kargil regions. This is the challenge for our Commerce Ministry, which should get the considered backing from the Cabinet Committee on Security. We can act confidently with restraint and be more ‘peaceful’ if we are militarily very strong, as this quality alone generates respect amongst nations.

The Indian Army should take advantage of the fact that the government has authorised a standing Army strength of 1,00,000 above the one million mark. Therefore, achieving 45 Combat Divisions Force level plus the necessary complementary adjuncts, is well within the realms of possibility, while putting into effect our restructuring plan for transforming into a ‘heavy breakthrough’ capability Army. Acquiring a credible and advanced second strike nuclear capability will require construction of eight nuclear submarines over the next 16 years. If something good has to emerge, then we have to do our job with tremendous speed after doing the initial basic thinking. Mid-course corrections are an inherent part of the metamorphosis to becoming a respected power in our own right.

8 thoughts on “Developing Heavy Breakthrough Capability for the Indian Army”