Be it military philosophies, social systems, cultural ethos, political doctrines, economic concepts, business environments and cosmic theories, technology over the last fifty years has been the prime mover of change. Myths have exploded, systems have collapsed, doctrines have been turned upside down; philosophies have been questioned; theories have been replaced; concepts have fallen apart and last but not the least, even the human anatomy is under the threat of reshaping itself.

The pace of change has suddenly accelerated with the beginning of the last decade of the second millennium. As it drew to a close, every known field of human activity and existence was in a state of upheaval and disorientation. The theme of the opening decade of the 21st century is to change, adapt, adjust and mount the technology-driven band-wagon of the times or perish.

All these changes have had the cascading effect on the general strategic environments as well, which in turn have affected the global balance of power and the philosophy of war. Rapid progress in ‘Nano technology’, space research, robotics, computers, genetic engineering, chemical, physical and biological sciences have revolutionized communications and energized the weapon systems, whose synergistic impact questioned the old form of war and war-making.

What future war are we thinking of if India loses the current war imposed on it? What good will be the army if there is no India tomorrow?

Everything from philosophy to doctrines, tactics to strategy, ‘battlefield-fronts’ to ‘battlefield-rears’, combat soldiers to non-combat operators, there is a virtual shift from the old form of war. Enhanced ranges, deadly lethality and perfect accuracy characterizes the modern world arsenal. Smart ammunition, with their mid-course and terminal guidance, has made the old dud-ammunition look ridiculous. There is a fusion of the battlefield and the rear areas, leading to extended frontiers of war but as synchronized and integrated fronts.

Nuclear devices, ethno-bombs and chemical agents spell as much danger to the white-collared gentlemen in the rear as to the men donning ‘olive greens’ on the front, implying there is no shield from their deadly effect for any one. In a given geographical area, users may suffer as much damage as the target. Consequences of a nuclear conflagration are unimaginable. The world is now getting to the view that there are no winners in a nuclear war.

Theories are being advanced which speak of ‘Designing of War’ (DOW) at the global level and War by Other Means (WOM) at the regional and local levels. Implicit in the DOW and WOM theories of war is a fact, where war is no more seen, merely as a ‘bull-fight’ of the two opposing armies in the ringed arena of national borders. It is the military truism for the first few decades of the third millennium.

Also, alluded to it is a corollary that future war would no more remain the sole domain of soldiers in olive green. There are soldiers of different hue and cry who would play more vital roles than the conventional soldiers. Think of ‘Smart Soldiers’ (Computer boys, scientists and technicians); ‘Irregular Soldiers’ of private armies call them terrorists, militants, insurgents, fifth columnists – what have you; ‘Cyber-Soldiers’ (info-manipulators), software experts, spin doctors and media barons and defense analysts. Thus, conventional soldiers have their roles considerably reduced. This is the reason most armies of the world have been cutting their flab. The trend is towards lean and thin armies of quality for a future envisaged role rather than heavyweight armies of quantity and numbers. All this due to the changing nature and form of war.

In the functional form, the war in the twenty first century is being viewed as a synchronized module of a ‘three act stage play’ rather than a hither-to-fore known ‘one act play’ of uniformed soldiers monkey-dancing across the borders. This ‘monkey dancing’ has been relegated to the last act of the synchronized module, which may or may not be necessary. Postulating his theory on the ‘brain-force-wars’ of the ‘third wave civilization’ in the twenty first century, Alvin Toffler paraphrases them as ‘Niche wars’ or the ‘Designer Wars’. The first two acts of these Designer Wars are more important than the third act because of their low costs.

The first act is of ‘Info War’ – a constant diatribe against the potential adversary to show him in poor light. Information will be controlled, manipulated, twisted and distorted to show the adversary as the mother of all worldly evils – a ‘rogue state’ which ought to be punished. ‘Cyber-soldiers and the Spin doctors’ have a tailor-made role to emotionally agitate world public opinion. Electronic and print media is the stage (read battlefield) on which this phase of war is waged. Near-authentic visual clips and in-person details of gory tales of woes are planted in the media to hypnotize the targeted audience. The world will be shown what is intended to be shown.

Time has come when it must be viewed in a holistic and integrated manner to understand the intricacies of Bleeding War and WOM.

Visibly disgusting, apparently shocking and morally unbelievable episodes, spun out of the fertile but imaginative minds of Spin doctors, will rake the moral consciousness of even the alleged accused. Gulf wars in 90–91 and 2001 have demonstrated as to how public opinions will be manipulated. Use of air waves will add different dimensions to this concept of war. War will be in the drawing rooms of everyone. Gulf wars, Kargil episode–1999 and Mumbai 26/11 have amply demonstrated that war has become soap operas of television. The case of Saddam Hussein and Iraq’s elusive WMD (Weapons of Mass Destruction) is very well known to all of us.

This dimension of the war had become apparent during the First Gulf War in 1990. It is part of history now as to how the young daughter of the Kuwaiti ambassador to USA in 1990 was doctored to narrate to the US senate an imaginary tale of rape and molestation by Iraqi soldiers.

National vulnerabilities of the adversary in the form of ethnic and racial cleavages, religious divisions, regional dissimilarities, lingual heterogeneity, economic imbalances and the cultural-chasm would be exploited to create a condition of anarchy and chaos.

The second act of the Designer War module is the ‘bleeding and squeezing’ phase. It may follow two courses, either concurrently together or separately or even singly. The first course could follow aggressive ‘Economic-War’ in the form of trade embargo, choking off development funds or levying economic sanctions. The second course would be to initiate covertly a ‘Bleeding War’ to destabilize or even balkanize the adversary. National vulnerabilities of the adversary in the form of ethnic and racial cleavages, religious divisions, regional dissimilarities, lingual heterogeneity, economic imbalances and the cultural-chasm would be exploited to create a condition of anarchy and chaos. Separatists’ movements will be encouraged. We will talk about it more in context of India, later.

The final act of the ‘Designer War’ is the quick ‘surgical operation’, using both smart-soldiers and conventional soldiers to inflict ultimate unacceptable damage to force the adversary to capitulate. This act, may or may not be enacted if ‘Act-One’ and ‘Act-Two’ have already produced the desired results. The 100 hours ground battle in the Gulf War in 90–91 was the culmination point of this nature of the ‘Designer-War’. ‘Act-Two’ was partially enacted as ‘Act-One’ had produced a very favorable world opinion for a quick surgical operation. The promised mother of all battles of Saddam Hussein turned out to be a damp squib.

Then, version-two of the Gulf war in 2001 showed its real impact. Also, there was no need for a low cost option of ‘Act-Two’ as the opposing players were the military unequal. On one side was the high-tech army of ‘Third wave civilization’ which was lean and efficient. On the other side was a low-tech army of Second wave-civilization which was all flab and human mass. It was brain versus brawn or quality versus quantity. The brain won, the brawn disintegrated. 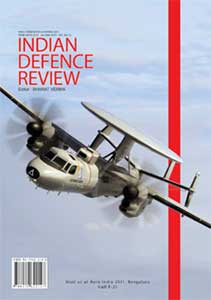 But imagine a condition if technological parity had existed between USA and Iraq, say like erstwhile Soviet Union and the USA: would the third act of the Designer War be possible? It would have been unthinkable. Pigs Bay crisis of 1961 had amply underlined this fact. Then, Soviet intervention in Afghanistan in 1979 invited only clandestine and covert opposition from USA. It dared not take direct action. In any case, it would not have been supported by the world body as it had done in case of Iraq in 2001.Ever since the collapse of the Soviet Union the geo-strategic environments have undergone a change. As the 20th century came to a close, USA is the only ‘Ring Master’ in the world circus of nations. It enjoys the freedom of action which no other nation can. Therefore, except the world ‘Ring-Master’ no other nation enjoys the freedom of pursuing its national interests across the borders. Perhaps the votaries of hot pursuit in India ought to understand this.

Arguably, in the light of the prevailing geo-strategic environments, along with the current level of technological disparities with the USA and parity at the regional level, nations cannot think in terms of launching surgical operations against their adversaries. The only nation, who has some semblance of a near-technological and weapon-system parity to defy USA, is China. But then think-tanks in USA have been keeping themselves occupied to deliver ‘a-la-Soviet’ on China. In short, military and technological parity prevents opposing nations from going all out as per the old and classic concept of war. Kargil–99 and Mumbai–26/11, despite the rhetorical noise of our leaders, demonstrated as to why we are constrained to take all out action against Pak-sponsored terrorists.