The keel of India’s first Indigenous Aircraft Carrier (IAC) was laid by the Raksha Mantri at Cochin Shipyard on the 28th of February 2009. This major milestone of the IAC project underlined the commitment of the nation to acquire the capability to design and build these versatile and capable warships. 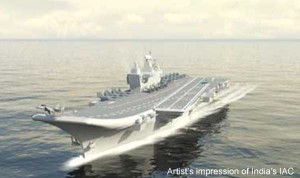 Credit for the achievements attained so far must be given to several organizations; to the Naval Staff who conceived and obtained approval for the project, to the Ministry of Defence who appreciated the need and gave the ‘go-ahead’, to the Indian Navy’s Directorate of Naval Design, who, despite shoestring resources and limited previous experience, evolved the design and are managing the construction programme successfully overcoming several obstacles that come their way, and not least, to the shipyard for showing flexibility and resourcefulness in transforming drawings and plans into what, in due course, will become a potent warship, giving the nation the capability to project power and exercise sea control over its vast maritime zone of interest.The advent of seaborne aviation came close on the heels of heavier than air flight. Initially merchantmen and conventional warships were converted to operate aircraft. World War II and the ensuing Cold War provided the impetus to technical developments which have greatly improved the carriers’ operational capabilities. While several nations have acquired and operated aircraft carriers, only a handful have successfully designed and constructed these ships. Historically, the United States, Britain and Japan had constructed the largest numbers up to the end of WW-II, in the wake of which, construction of carriers was suspended in Japan.

In the post-war era, France, Russia (Soviet Union), Italy and Spain have also designed and constructed aircraft carriers and helicopter carriers suited to their requirements and for export. Aircraft carriers have become the primary means of launching and prosecuting expeditionary operations in times of conflict, and convey a powerful diplomatic message in times of peace. Their versatility makes them the most effective means of providing relief in the event of natural calamities.

New aircraft carrier designs are presently being developed by the United States and by Britain. The US programme, with its genesis in the CVNX concepts, later evolved into the CVN 21 class, the lead ship of which is presently under construction and is expected to enter service in 2015 as CVN 78, USS Gerald R Ford. While the hull will retain the features of its predecessor “Nimitz” class, the ship will embody a large range of novel new technologies including the power plant, ship systems, catapults and arresting gear, flight deck arrangements, weapon handling systems and structural protection. The British programme was originally conceived as an Anglo-French project, CVF/PA2, with the UK building two ships and France a single one, to a substantially common design. 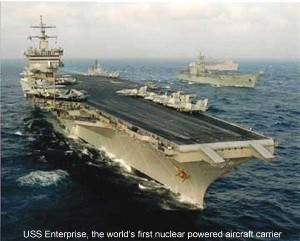 However, the French discontinued cooperation on the project in 2008 and in 2009 ordered studies on different ship architecture and an alternative propulsion system. The CVF project, at present, remains exclusively British, known as the “Queen Elizabeth II” class. The future French carrier design is reportedly being evolved; taking into consideration the experience gained during the operation of the Charles de Gaulle, and is expected to be of a larger size and displacement than the CVF, carrying a more capable air wing and with a greater degree of self protection.There are media reports that Russia and China are engaged in developing designs for aircraft carriers, but few details are available. The CVN-21 and CVF programmes undoubtedly embody the biggest aircraft carrier design efforts in recent times, with several new concepts and technologies being incorporated. 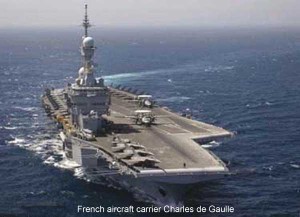 India’s maiden effort would, logically, be followed by a successor, ‘IAC-2’ in due course. The question to be addressed at this stage is, “what should be the design of the new ship?”Should the design of IAC-1 be repeated or should a new design be evolved.The first option has many factors in its favour- low technical risk, opportunity to plough back the ‘lessons learnt’ from IAC-1, standardization of operating procedures and of equipment and systems and commonality of shore support facilities.

A new design, on the other hand, would provide an opportunity to incorporate new technologies which enhance the combat capabilities and operational efficiency of the ship to meet the challenges of the future. Both views have logical appeal. 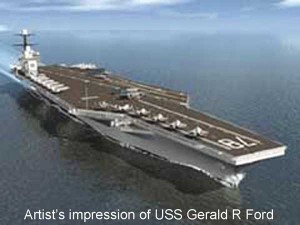 In view of the high cost and long gestation period of such projects, it would be appropriate to examine the factors driving the design of aircraft carriers and to review the new concepts and technologies being incorporated in designs being presently developed, in order to arrive at a judicious decision.Design and construction of aircraft carriers is a complex and challenging endeavour. The design must balance differing, and often conflicting requirements of structural strength, stability, seakeeping, survivability, powering and propulsion, electrical power generation and distribution, air operations and aircraft support, maintenance, ergonomics, complementing and habitability.The construction activity presents a challenge to the shipbuilder and requires continual adaption and innovation.

The size, composition and characteristics of the carrier’s air wing and its envisaged operational role is undoubtedly the primary factor governing the design of the ship. The air wing is invariably a mix of different types of air vehicles which would include fighters for strike and combat air patrol, and helicopters for various roles – search and rescue, anti submarine warfare, airborne early warning (AEW), commando operations and utility. 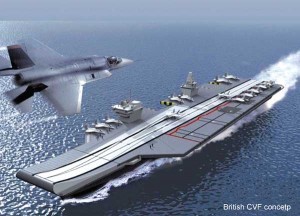 Navies are also operating larger fixed wing AEW aircraft (Lockheed Martin E-2B). Tilt-rotor craft (V-22 Osprey) have also appeared on the scene. The ship would be designed for a 50+ year lifespan during which the air wing could well undergo two or even three ‘generational’ changes. Unmanned Combat Air Vehicles (UCAVs) are also expected to be embarked on aircraft carriers to expand the ships’ operational capabilities. The ship’s design has, therefore, to be sufficiently adaptable, particularly in respect of aviation facilities and mission systems so as to enable the ship to effectively operate aircraft which could be considerably different from those initially embarked.Therefore, emerging technologies which are finding a place on the two largest aircraft carrier programmes currently being executed, i.e. the US CVN-21 and the British CVF do merit serious study and consideration.Sortie RateAn accepted ‘figure of merit’ of a carrier’s design is the ‘sortie rate’ that it can generate i.e. the rate at which it is possible to launch aircraft, recover them on completion of their missions and re-launch them after refueling, rearming and completing mandatory maintenance/preparation. The aircraft launch and recovery systems, and the systems for movement of armaments from the magazines to the aircraft have a major bearing on the sortie rates that can be achieved.

One thought on “Design Considerations for Indigenous Aircraft Carrier-2”