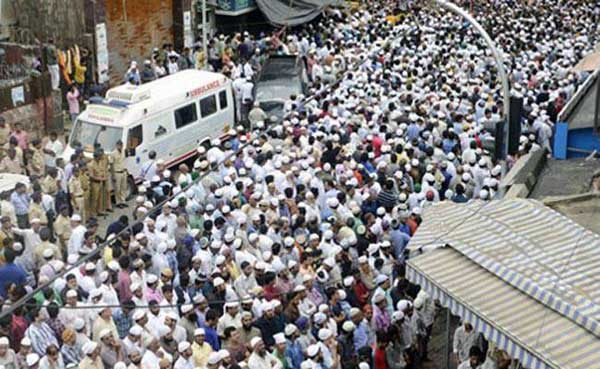 Underworld don and Dawood aide Chota Shakeel has warned about strong reprisal for Yakub’s hanging. Crime, politics and Pakistan’s proxy war have become inextricably intertwined. All at the cost of national resolve to fight Pak sponsored terror. The security apparatus is being weakened because India’s depleting consensus to fight proxy war at political and social planes

…the Dawood gang activated every criminal, political and legal leverage. These leverages are nothing but over-ground Pakistani proxies. Unlike the sleeper cells they are vocal, having the veneer of intellectualism and respectability.

Yakub and his associates were the harbinger or initiators of Pakistan’s proxy war on India. The proxy war traveled to the Indian hinterland only after the 1993 Mumbai blasts in which literally exploded more than 250 humans and many more associated lives. The perpetrators reveled at the ghastly sight from the comfort of distance, Yakub being one of them. Some of the perpetrators were sent to Pakistan for training. A new type of war ‘proxy war’ arrived in India, which Pakistan has been schooled to by the US and its allies against the Soviet forces in Afghanistan. This new war was rooted in religious fanaticism and couched as Jihad, the enemies being civilians and security forces alike.

The magnitude of casualties accentuates when compared to the fact that in the entire 1971 Indo-Pak War some 600 officers and men were martyred. Pakistan’s proxy war has made borders and civilian lives immaterial and irreverent.

Since 1993 Mumbai has been endemically battered by terrorist attacks. The reverberations of jihadi violence anywhere in the subcontinent are invariably felt in Mumbai. Pak sponsored terror had moved full circle when it traveled to Mumbai on 26/11 On its way from Kashmir to Mumbai Pakistan’s proxy war hit Calcutta, Ayodhya, Varanasi, Delhi, Jaipur, Ajmer, Ahmedabad, Pune, Hyderabad, Bengaluru and Chennai. The political capital Delhi like the financial capital Mumbai was buffeted several times. The principal non-state player being the Lashkar-e-Taiba (LeT) its Indian proxies like Indian Mujahideen(IM). All attacks on security installations along NH-1A i.e. between Gurdaspur-Jammu have been planned and executed by the ISI-LeT combine.

The latest attack in Dinanagar, it has emerged, was also the handiwork of the ISI-LeT combine. This coincided with the decision to execute death sentence to Yakub Memon. The link between execution of death sentence to jihadi terrorists in India and acts of terror by Pakistan is too glaring. During the period of preparation ofAjmal Kasab’s hanging there were blasts in Pune, and there were blasts in Hyderabad, Kashmir and Bengaluru in the wake of execution of death penalty to Afzal Guru. The purpose of this jihadi revenge terror is not so much to terrorise India but to keep the jihadi discourse and machinery alive and upbeat in Pakistan as well as the proxies in India.

When every effort including the ploy of B Raman’s so called unpublished article was rendered futile, some proxies began to play their final game of ‘balancing terror’.

Chota Shakeel’s fulminations and warnings of revenge acts therefore should be assessed in this backdrop.

It is likely to manifest in some form or the other.

It is not that the Dawood gang has not used coercion and inducements to upturn the Yakub’s death sentence. It activated every criminal, political and legal leverage. These leverages are nothing but over-ground Pakistani proxies. Unlike the sleeper cells they are vocal, having the veneer of intellectualism and respectability. The Pak military-intelligence establishment deals with these proxies through characters like Dawood Ibrahim. The underground jihadi proxies and sleeper-cells in turn are dealt by the likes of Hafeez Saeed and network in India.

It may be underscored, that the Dawood gang exercises substantial leverage over three important facets of national life of India, they being Bollywood, Cricket and politics. Without any pangs of conscience, leading actors, actresses, filmmakers and musicians traveled to destinations outside India to entertain Dawood and his men, not long after the 93 Mumbai blasts. Rather one filmmaker’s son got away too easily for his role in 26/11.

The entire cricket betting syndicate in the sub-continent is controlled by the Dawood gang. Anyone who has tried to challenge this syndicate has been eliminated including a high profile lady whose politician husband made maximum noise about the desirability of capital punishment, even as his own legal destiny hangs tenuously. It is also known as to who are the close political associates of Dawood in India. Given the Dawood-ISI equation it can be imputed that the latter also enjoys the same leverages.

These leverages were compelled to surface as the Dawood-ISI combine made the last ditch effort to avert Yakub Memon’s death sentence. In most cases it out of fear rather than conviction. It may be recalled that same personalities clamoured for ‘hanging’ the rapists of Nirbhaya because there was no contrary pressure from Dawood and ISI. No sooner they learnt about the religious identity of the juvenile rapist their clamour died. These leverages comprising bollywood stars, politicians activists knew well that nothing would happen if they abused the state, but they would meet their physical, professional or political end if they disobeyed Dawood’s diktat.

Having failed to browbeat the Indian state to spare Yakub, the jihadi terror industry for the purpose of retaining the morale of its overt and underground targets may attempt something more vicious and spectacular.

When every effort including the ploy of B Raman’s so called unpublished article was rendered futile, some proxies began to play their final game of ‘balancing terror’. These are the same anti-nationals who unable to challenge the Jihadi discourse started the bogey of ‘ Hindu Terror’ days before 26|11. The facts are that 26/11 did take place—the LeT perpetrators did wear threads on their wrists to emphasize their Hindu identity—one politician again seen on an ‘Hindu Terror’ overdrive during the recent Yakub episode, did claim that he was in constant communication with Hemant Karkare , the Maharashtra ATS chief till hours before26/11—Hemant Karkare by imputation did therefore share Intelligence with an out of job politician in blatant breach of Official Secrets Act—during 26/11 Hemant Karkare was indeed killed under most suspicious circumstances—later this politician did travel to Mumbai to release a book ‘’26/11 :RSS ki Sazish’’. Readers may then themselves decide as to who are conspirators of 26/11 and the fabricators of Hindu Terror. These conspirators did not succeed as Ajmal Kasab was caught alive. Ajmal Kasab in a way saved India from the consequences of dangerous ‘terror balancing game’ by the over ground ‘Chota Shakeels.

It is not that these politicians do not know the disastrous political consequences of their ‘terror balancing game’ but such are the skeletons in their respective cupboards that they are easily blackmailed by the likes of Dawood and his master, the ISI. Some lawyers are not far behind. The country saw a glimpse of the shady and vulnerable side of some of these politicians and lawyers in the social media.

India is under attack by many sophisticated Chota Shakeels.

These Chota Shakeels and their utterances need to be analysed and factored by the security planners and the intelligence agencies for preemptive actions. Meanwhile the military-intelligence establishment would also endeavor to act through terrorism to emerge from the temporary setback to its proxy war.

Having failed to browbeat the Indian state to spare Yakub, the jihadi terror industry for the purpose of retaining the morale of its overt and underground targets may attempt something more vicious and spectacular.