Demographic invasion of India from the North East

Relevance of above data gives further credence to the decadal percentage growth of population of All India, Assam and Bangladesh as under: – 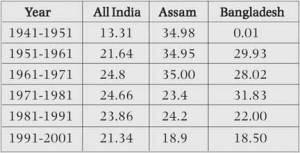 You can see from above that the decadal percentage of growth of population in Assam is more than the growth in Bangladesh, except for the period 1971-1981 due to anti-foreigners agitation in the state when these people fled the state and 1991 -2001 obviously  due to illegal migration.

The community-wise growth rate given as under will give you a better picture of communal imbalance being created in Assam by the immigration of Bangladeshis :-

As per the 1991 census, four districts of Assam namely Dhubri, Goalpara, Barpeta and Hailakandi became Muslim majority districts. Two more districts; Nagaon and Karimganj have attained Muslim majority in 1998. These statistics indicate that illegal migrants coming into India after 1971 have been exclusively Muslims. These changes have significantly altered the electoral profile of Assam which is unethically exploited by political parties for their partisan gains compromising the stability of the region.

In other states there has been demographic invasion leading to demographic imbalance, whereas Tripura had to witness demographic inversion. The tribal population of Tripura, which was 93 percent in 1947 has been reduced to a minority of 23 percent of its 31.9 million population today. The changing demographic balance, economic pressures and awareness resulted in tribal resentment, which grew with the unabated influx of migrants. It is difficult to assess the quantum of immigration since no such data is available; however, a comparison between population growth and the decadal growth birth rate indicates that maximum influx has taken place into Tripura after 1950 which will be evident from the data given as under: 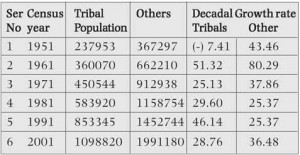 From 1951, the others’ population is growing in leaps and bounds defying the natural growth rate. At present a Mobile Task Force (MTF) is responsible to identify and deport the illegal immigrants from Tripura. From 1974 till mid 2006 the Task Force has deported approximately 1,78,000 illegal immigrants to Bangladesh. It is just a drop in the ocean.Now let us have a look at distribution of population by religion in the state of Tripura:-

The illegal Bangladeshi Muslim migrants have settled almost homogeneously all along the porous Indo – Bangladesh border. The similarity in language and customs has perfectly aided the silent gradual mingling of these foreigners. However, some areas have been more favoured than others. A few of these areas lie in the Siliguri corridor and including districts of Cooch Behar, Jalpaiguri, Darjeeling, North Dinajpur and South Dinajpur.

The massive influx of 22 million illegal migrants from Bangladesh is a national problem with economic, administrative and political implications.

Demography of Dhubri district of Assam, which is beset with ULFA, BODO and Islamic Militancy, comprised 70 percent Muslims, as per 2001 figures. There has been a continuous unchecked import of illegal Muslim Bangladeshi migrants into the district after 1991 and the present population of Muslims is over 80 percent.

A comparison of figures of population by religion in the Jalpaiguri district  gives a fair idea in proliferation of Muslim population:- 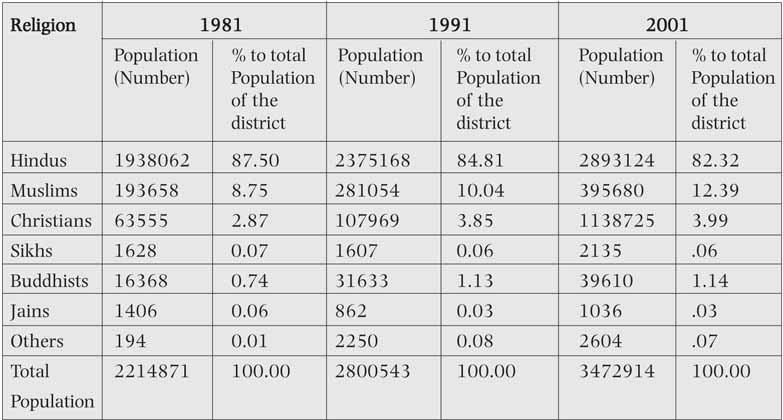 During 1971 War, approximately one crore Bangladeshi nationals entered India as refugees. After liberation of Bangladesh, they are believed to have returned to Bangladesh. However, approx 30 lakh, filtered back into India finding that someone else has occupied their land, houses and belongings.

This silent invasion of the NE states has been taking place for several decades and the Govt has failed to stem this demographic onslaught. What started as a purely natural and economic movement has now acquired communal, political and international dimensions with serious security overtones. Although Bangladeshi migrants have come into several states of India; their number is alarming in the states of West Bengal, Assam and Tripura. Also they are slowly but surely creeping into Mizoram as cheap labour force. It is high time Mizoram learns a lesson from other sister states.  If not effectively checked, they may swamp the sons of the soil and this may also help the fissiparous forces in facilitating severing the NE landmass from the rest of India. This will lead to disastrous strategic and economic results. Politicians for their own vested interests are under playing this issue of grave importance to national security. Lt Gen (Retd) SK Sinha, PVSM , erstwhile Governor of Assam in his report to the Central Govt suggested some steps, which can be taken in this regard, these are: –

The massive influx of 22 million illegal migrants from Bangladesh is a national problem with economic, administrative and political implications.

Three trends emerge from this movement of migrants:-

The illegal migration of Bangladeshi Muslims has acquired a national security dimension, this is being compounded by growing international Islamic fundamentalism and the desperate efforts of forces hostile to India to destabilise the country. It is not far-fetched to visualise a Kashmir like situation in another 5 years, wherein Bangladesh fully supported by Pakistan may fight a proxy war and cause national security problems. There is also a threat to the land link of the North East with the rest of India i.e. the Gateway to the North East i.e., “Siliguri Corridor”.  Assam’s turnover of 4900 crores a year in tea, 7800 crores in oil and other economic assets of the North East can be endangered. Any breach of this link will have disastrous consequences for the entire nation.

Emerging trends in the region indicate that Muslim Fundamentalist Organisations (MFOs) are joining hands with the militants and disgruntled elements of the society to raise anti-India tirade or separatist movements.

13 thoughts on “Demographic invasion of India from the North East”