The ethnic killings in the first week of May 2014 once again exposed the demographic fault lines in Assam. 45 persons lost their lives in violence perpetrated by suspected insurgents of National Democratic Front of Bodoland (NDFB) in the Bodoland Territorial Area Districts (BTAD). Assam has witnessed a series of ethnic clashes between the Bodos and Bengali speaking settlers, both Hindus and Muslims earlier also.

In 2012, acts of rioting and arson on ethnic lines led to death of almost 100 persons and over 400,000 persons were forced to seek shelter in refugee camps.While the affected people were largely Muslim immigrants, the conflict does not have communal overtones.

Rather, it is the apprehension of the Bodo community that they may be marginalised or dispossessed of their land within their traditional homeland areas. These fears have arisen due to alteration of the demographic pattern within a culturally sensitive society which is grappling with skewed population ratios due to unchecked migration over the last six decades.

The unchecked illegal migration into the state through the 286 km long porous border with Bangladesh has resulted in ethnic clashes, paved a way for insurgencies and growth of number of insurgent groups fighting for ethnic identity. The last three decades have witnessed large scale violence which has stalled development and created divisions within a harmonious society. Such a massive inflow did not go undetected, but official apathy and the compulsion of electoral vote bank politics allowed it to continue. This was an invite to disaster as it radically altered the demographic balance in many areas. A close scrutiny of the population increase since 1951 indicates a high population growth in the state presumably due to the heavy influx of the illegal migrants.

In the last six decades of independence, the population of Assam has increased by almost four times from 80.3 lakh in 1951 to 311.7 lakh in 2011 against a national average of  3.2 times. The census report of 1991 of Bangladesh talked of a unique phenomenon of missing population, estimated at eight million[2], 6.27 million Muslims and 1.73 million Hindus who presumably had migrated to India.

Unchecked migration has also led change in religious denominations within the state. The Hindu majority population reduced to 65 percent…

Though the Parliament had passed the Immigrant (Expulsion of Assam) Act in 1950, which allowed for removal of any immigrant person in Assam, except displaced persons, whose stay was detrimental to the interest of general public of India or any scheduled tribe in Assam[3], the subsequent explosion of population was a clear indicator that no worthwhile corrective action was taken to deport illegal migrants. The promulgation of IMDT {Illegal Migrants (Determination by Tribunal)} Act in 1983 was a clear case of vote bank politics overruling national security concerns. The Act further aggravated the issue by giving a reprieve to the migrants as the onus of proving the citizenship of the suspected illegal migrant rested on the complainant instead of the suspect as applicable under the provisions of Foreigners Act of 1946. It was the only case of any nation having two immigration laws, one for the entire country and another for Assam. The Act took away the responsibility of detection and deportation from the executive and vested the same in quasi-judicial tribunals headed by retired judges. As a result, since the promulgation of the IMDT Act, till its repeal in 2005, the tribunals could only identify and declare 12,424 as illegal migrants of which only 1481 have been deported. In comparison, in the earlier two decades between 1962 and 1984, over 300,000 illegal migrants were detected and deported[4].

Unchecked migration has also led change in religious denominations within the state. The Hindu majority population reduced to 65 percent in 2001 from 72 percent in 1971. On the contrary, the Muslim population, which was 19.9 lakh in 1951, increased to 82.1 lakh in 2001. Muslims now constitute almost one third of the population, a considerable increase from 24 percent in 1971. The maximum population growth of over 20 percent compared to 2001 census has been recorded in nine districts[5] which have had higher percentage of muslim population. The districts of Dhubri (74.9%), Barpeta (59%), Goalpara (54%), Karimganj (52%), Hailakandi(57%) already have a muslim majority population with districts of Bongaigaon (39%), Cachar (36%), Darrang (35%) and Marigaon (47.5%) close to a muslim majority. The true picture would only be known when the religious based figures are made available based on 2011 census. The minority population is now a position to influence almost 45 to 50 seats out of 126 seats in the state legislative assembly. If the same trend of demographic alteration was to continue due to collusive migration, Assam may face a tectonic demographic shift in the next three to four decades. A hypothetical graph taking into account the growth rates of all communities indicates a plausible demographic inversion in the state. 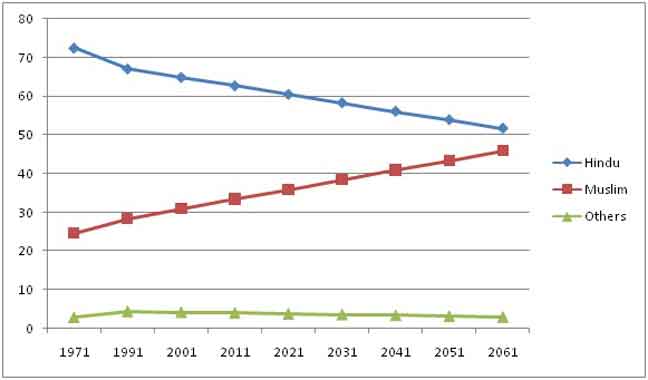 The greatest concern of the demographic shift is the likely effect on the region’s security. The emergence and activities of various insurgent groups on ethnic lines is a clear indicator of deep rooted trepidation and distrust between various ethnic groups and the migrants. The ethnic clashes must not be given a communal flavour as religion plays a limited role only in societal complexities. The larger issue of ethnicity and a steady shift in population ratios is the worrying factor. Assam today has 16 active insurgent groups of the 45 insurgent groups present in the state as per The South Asian Terrorism Portal (SATP).  A shift in demographic pattern has given an opportunity to fundamentalist groups to exploit the demographic fault lines in the state and the Northeast. SATP lists 14 Muslim insurgent groups, out of which Muslim Tigers Liberation of Assam (MULTA) has been active in the areas adjoining Bangladesh. The linkages of these groups with ISI and other insurgent groups in the region pose a long term threat. While local political compulsions have led to a soft stance in the approach of the security forces in their operations against insurgent groups, a decisive and resolute action is the need of the hour to thwart any reprehensible designs on India’s security while taking steps to lower ethnic tensions as well as checking illegal migration into the state.

[1] As no census was held in 1981 in Assam, the approximate population levels are based on the decadal growth

[4] H Victor, The IMDT Act in Assam. Available at http://www.studentorg.umd.edu/desi/article37.htm