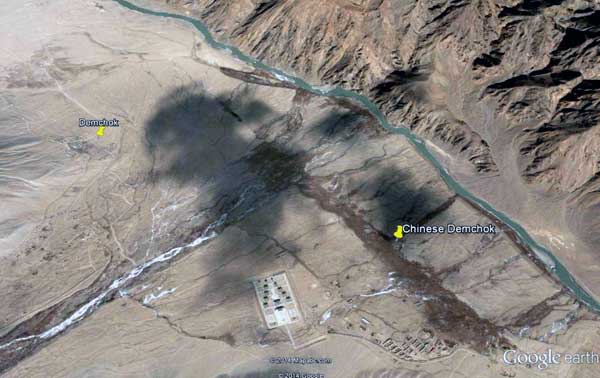 View of the nalla

On May 23, Scoop Newsreported that the Chief Executive Councilor of the Ladakh Autonomous Hill Development Council (LAHDC), Rigzin Spalbar wrote to J&K Chief Minister Mufti Mohd Sayeed requesting his support on an issue important for the people of the mountainous region.

…till the 17th century, the Manasarovar Lake and Mount Kailash were part of the Kingdom of Ladakh and the village of Minsar, near the Holy Mountain continued to pay revenues to the J&K State up to 1960.

Spalbar wanted Mufti to take up with the Central Government the opening (or reopening) of the Kailash Manasarovar route via Demchok, in Leh district of Ladakh.

Soon before President Xi Jinping’s visited India in September 2014, PTI reported a forthcoming ‘political gesture’ from Beijing; the Chinese President was to announce the opening of a new route, via Nathu la in Sikkim, for Indian pilgrims wanting to go on the Kailash Manasarovar yatra.

It is a fact that the Ministry of External Affairs’ yatra, via the Lipulekh-Purang route has always been rather treacherous.

For those who were unaware of the topography of the Himalayas, the Chinese offer to open Nathu-la seemed reasonable.

PTI then explained: “The new route, though longer, takes pilgrims from Nathu La to Shigatse… [and] from there the pilgrims could comfortably travel to Manasarovar and Kailash using well laid out highway.”

It was obviously Beijing’s rationale, but was it really in India’s interests? PTI explained: “It would be part of the big gesture of friendship not only to strike chord with Mr Modi but also the people at large, specially the Hindus and Buddhists considering its religious importance.”

But this ‘gesture of friendship’ from Beijing was obviously driven by self-interest.

In his letter to Mufti Mohd Sayeed, Spalbar mentioned the historical and spiritual importance of Mount Kailash and Manasarovar Lake as pilgrimage places for Buddhists as well as Hindu and Jain believers. He further pointed out that the Buddhist population of Ladakh had a long tradition of visiting the Kailash area, at least till China occupied Tibet in the early 1950s; the pilgrims till then always used the Demchok road.

Spalbar added that till the 17th century, the Manasarovar Lake and Mount Kailash were part of the Kingdom of Ladakh and the village of Minsar, near the Holy Mountain (read my article on Minsar) continued to pay revenues to the J&K State up to 1960.

In 1954, Ven. Kushok Bakula Rinpoche, then a Minister in J&K Government visited Manasarovar, along with Sonam Khangsar, a Judicial Clerk of the Leh District Commissioner Office, via Demchok; they collected taxes from the Minsar villagers.

…give a new dimension to the trade and tourism sector to the Ladakh district and the entire J&K State: “Moreover, the long lost historical and spiritual relations [between Tibet and Ladakh] will be revived…

The Chief Executive Councilor highlighted the fact that the Lipulekh and Nathu-la routes are difficult as it “involves trekking at high altitudes upto 19,500 feet under inhospitable conditions including extreme cold and rugged terrain that covers 23-25 days.”

Spalbar suggested using the Demchok route as the Holy Lake and Mountain are located at a mere two-day drive from Leh; further the route is relatively easy as it does not encounter any major pass en route.

The letter further states that the opening of the Leh-Demchok route to Kailash Manasarovar route has been “a persistent demand from the people of Ladakh since last many decades and has been relentlessly taken up with previous Governments at Center.”

According to the Chief Councilor, the opening up of the Demchok road could be a catalyst for the local economy as well as for the overall development of Ladakh.

It would further give a new dimension to the trade and tourism sector to the Ladakh district and the entire J&K State: “Moreover, the long lost historical and spiritual relations [between Tibet and Ladakh] will be revived,” wrote Spalbar.

A day later, The Economic Times said that the J&K State Congress “hit out at the Narendra Modi government for its alleged failure in taking up the issue of opening of Demchok route in Ladakh for pilgrimage to Kailash Mansoravar, in the ongoing talks with China.”

The Legislature Party leader from Ladakh, Rigzin Jora alleged: “Modi government has failed to take up opening of Demchok… It is unfortunate that he has not taken up with China the opening of a new route …although this was BJP’s commitment in the parliamentary election.”

Jora used the same argument as Spalbar: “One can drive upto Kailash Mansarovar from Leh in two days without going through any high pass. So far the access is through Pithorgarh in Uttaranchal and …through Nathu La pass in Sikkim.”

He added: “Both these routes are treacherous and vulnerable to vagaries of nature and climate. A large number of pilgrims have lost their lives negotiating the high passes and the difficult terrain on these two routes. Demchok provides the easiest access. A pilgrim can visit the holy site and be back in Delhi in a week’s time.”

Jora asserted that during former Prime Minister Manmohan Singh’s second tenure, Delhi was given to understand by Beijing that China was ‘not averse’ to open the Demchok road as it was ‘not a disputed area.’

This New Silk Road appears to be a Chinese hypocrisy, for keeping India away from the benefits of the project.

Jora’s assertions cannot be confirmed as it is not known if National Security Advisor Ajit Doval could take up or not the issue of Demchok with his Chinese counterpart, State Councilor Yang Jiechi, when they recently discussed the Indo-China Boundary issue.

It is however rather strange that China, which is batting for a grand plan to create a modern Silk Road, with an mind-blowing investment of over US $2.5 trillion (over a period of a decade), still refuses to open the Demchok, one of the main traditional trade routes linking the subcontinent to Tibet and Xinjiang.

The Chinese Commerce Minister Gao Hucheng explained that more than 50 countries have shown interest in the initiative known as ‘One Belt, One Road’ to build a modern Silk Road Economic Belt (as well as a 21st Century Maritime Silk Road).

These projects include a network of railways, highways, oil and gas pipelines, power grids, Internet networks, maritime and other infrastructure links across Central, West and South Asia to as far as Greece, Russia and Oman.

Beijing’s open objective is to increase China’s connections to Europe and Africa.

Speaking at the sidelines of a conference in Boao, Xi Jinping said the scheme would stimulate trade and investment between China and countries along the route: “We hope that the annual trade volume between China and these countries surpasses US $ 2.5 trillion in a decade or so,” affirmed the Chinese President.

At the same time, the traditional routes, Demchok and the Karakoram Pass linking Ladakh to Tibet and Xinjiang remain closed to tourism, pilgrimage and trade.

This New Silk Road appears to be a Chinese hypocrisy, for keeping India away from the benefits of the project.

In the meantime, the J&K State is trying to increase the areas coming under the inner line permit system (or Protected Area Permit) for the foreigners wanting to visit some remote areas of Ladakh.

…the hypocrisy of China on this issue should be publicized; India can’t be roped in a Silk Road project if her interests are not taken into consideration.

Chief Minister Mufti Mohammad Sayeed stated: “The matter regarding extending the inner line permit for foreign tourists from Panamik to Varshi, including Yarma, Gumpa and Yarma Gongu monastery (in protected areas) in Nubra valley of Leh district, has been taken up with the Ministry of Home Affairs in February.”

These areas falls under the border districts of J&K which are covered by the Protected Area Regime under the Foreigners (Protected Areas) Order, 1958; it means that this order predates the time India discovered that China had built a road through the Aksai Chin.

A lot of water has flowed in the Indus since then.

The J&K administration had issued an order in January permitting domestic tourists to enter some of the so-called ‘protected areas’ under Nubra sub-division. The Indian Army was however not keen to allow foreign tourists in these protected areas without certain precautions.

It is said that the headquarters of 14 Corps based in Leh would agree to the extension of inner line permit (PAP) beyond Panamik with the precondition of establishing a police post to restrict foreign tourists beyond Varshi and along the road Sasoma-Sasrila; that would address the Army apprehensions.

While the security concerns should certainly be taken into consideration, it is also important to show to the world (and first, China) that these areas fall under India’s jurisdiction and it is up to the Central and State governments to grant permission.The same principle applies to many areas of Arunachal Pradesh and Sikkim.

Regarding Demchok, the hypocrisy of China on this issue should be publicized; India can’t be roped in a Silk Road project if her interests are not taken into consideration.

And it is clearly in India’s interest to open up Demchok to pilgrimage and later trade.