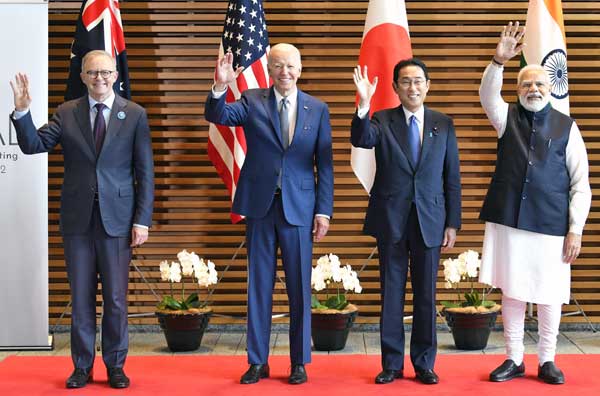 Concluding his first Asia tour, US President Joe Biden created a furious debate in global circles by telling reporters in Tokyo that the US would defend Taiwan in the event of an invasion. Drawing parallels between Russia and China, Biden said, “The idea that it (Taiwan) can be taken by force, just taken by force, is not just appropriate…That’s the commitment we made.” The utopian-class smelling action appeared pretty happy but some other drew attention to Biden’s traditional gaffes.

China was angered over Biden’s announcement about defending Taiwan. Chinese officials declared that there was “no room for compromise or concession”…

Unveiling his Indo-Pacific Strategy on March 28, 2022, Biden  had announced, “In the Indo-Pacific, America is strengthening its role and expanding its cooperation with longtime allies and partners, including new diplomatic, defence and security, critical and emerging technology and supply chain, and climate and global health initiatives, while supporting stronger ties between our European and Indo-Pacific allies.” The absence of any mention of China was conspicuous.

Biden’s pledge to defend Taiwan took White House officials by surprise. The very next day, Lloyd Austin, US Secretary of Defence, announced, “We remain committed to our ‘One China’ policy in keeping with the Taiwan Relations Act.” Nevertheless, China was angered over Biden’s announcement about defending Taiwan. Chinese officials declared that there was “no room for compromise or concession” and warned that they would protect their interests.

The Taiwan Relations Act requires the US to have a policy “to provide Taiwan with arms of a defensive character”, and “to maintain the capacity of the United States to resist any resort to force or other forms of coercion that would jeopardize the security, or the social or economic system, of the people on Taiwan.

China has said in the past that it would not tolerate US troop presence in Taiwan. On May 20, 2022, when Biden visited South Korea, he made no mention of China and indicated he is not bothered much about North Korea – a prime concern for South Korea. In his pre-election rallies, new South Korean President Yoon Seok-youl had said he wanted to attend the upcoming Quad summit in Tokyo but nothing was heard thereafter, perhaps without encouragement from Washington.

Taiwan was not included as a member of the IPEF. And there is no way the US would include Taiwan in the Quad either.

There is talk in the US media that Biden is considering lifting some of the $360 billion tariffs imposed on China by the Donald Trump administration because according to the US Treasury Secretary some of the tariffs are doing more harm to US businesses and consumers than they are to China.

Before the Quad summit in Tokyo had even begun, China was merrily drilling away in the South China Sea. Concurrent to the Quad summit, Chinese and Russian military aircraft involving Chinese Xian H-6 and Russian Tu-95 strategic bombers conducted joint exercises over the region lasting 13 hours. Fighter aircraft of Japan and South Korea were scrambled to shadow the Chinese-Russian joint military exercise.

After Biden’s departure from Tokyo, North Korea launched an ICBM and two shorter-range weapons into the sea. During his Asia trip, Biden had reaffirmed the US commitment to defend its allies in the face of the North’s nuclear threat. Japan’s Defence Minister Nobuo Kishi said the first North Korean missile flew about 300km (186 miles) with a maximum altitude of around 550 km, while the second, reaching as high as 50 km, travelled around 750 km.

Eventually, Taiwan was not included as a member of the IPEF. And there is no way the US would include Taiwan in the Quad either. On one hand Biden’s proclamation is to defend Taiwan against invasion and the US undertaking is for the Quad to supposedly counter China but on the other hand is too scared to antagonize Beijing by including Taiwan. So what does US defending Taiwan mean? Defend militarily means just like Ukraine, US will provide military assistance to Taiwan in case of Chinese invasion; pump in arms and more arms. America can’t even pump in mercenaries Ukraine-style which even Taiwan will not permit.

Did Biden actually pledge to militarily defend Taiwan or was it another gaffe on his part? It could be somewhere in between. Perhaps there is too much weighing on the mind of Biden as also the White House no matter how much they would want to keep it under wraps. The NATO-engineered fortress under the Azovstal steel plant in Mariupol has capitulated and some 2,500 prisoners taken (many non-Ukrainians), Mariupol has fallen to Russian forces and British media says Russia is poised for a major victory in the Donbas.

Quad has unveiled an integrated surveillance arrangement to monitor illegal Chinese fishing in the Indo-Pacific. It is well known that about 95 percent of illegal fishing in the region is by China.

After the fiasco in Afghanistan, the sanctions against Russia have not only impacted the world economies but has brought high inflation in Europe and US with increased possibilities of a looming recession. The energy crisis in Europe has worsened with the impractical decree of boycotting Russian energy. Concurrently, Russia had slashed the value of the dollar and the euro by 30 percent by linking the Russian Ruble to the value of gold and declaring to supply oil only against the Russian Ruble. EU perforce is paying for Russian energy in Rubles.  On March 8, 1 USD was 140 Ruble but on May 22, 1 USD equaled 62 Ruble.

The confusion within Europe can be gauged from the fact that Poland is calling for sanctions on other European countries (part of EU) for buying Russian oil. But at the same time Poland buys Russian oil from Germany. Is this ‘Nazification’ of Europe as Washington wanted or Poland being the ‘conduit’ for Western arms, mercenaries and all else is making such demands to please Washington?

Getting back to the question of the US defending Taiwan from a Chinese invasion, there is no way the US would directly confront China – same as in the case of Russia in Ukraine. But far from US military intervention in Taiwan, a miniscule test is on the horizon for the world to see. Quad has unveiled an integrated surveillance arrangement to monitor illegal Chinese fishing in the Indo-Pacific. It is well known that about 95 percent of illegal fishing in the region is by China.

Question is what happens when this maze of Chinese fishing trawlers is sighted doing illegal fishing, which should be easy? Will the US seize or impound these vessels, ask Quad members to do so or place sanctions on China dictating Quad members to do so? Would the Biden administration demonstrate its will by impounding just one of these fishing trailers which incidentally are dual tasked and may even be armed with lasers?