Defence Procurement Procedure – 2008 (DPP-2008) came into effect on 01 September 2008 and is due for biennial review in Sep 2010, under the aegis of the Defence Procurement Board. DPP has undergone reviews at regular periodicity. Surprisingly, every review has contributed in making the procedure more cumbersome and unworkable. In the name of reforms, bureaucratic stranglehold has been strengthened.

A number of discussions, brain-storming sessions and seminars are being conducted to generate ideas for streamlining the procedure. Unfortunately, most of these activities are being carried out by think tanks under the Government tutelage. No new ideas are likely to be generated as the think tanks have to toe the official line for continued funding and job security.

As has been the practice, all stakeholders would resist major reforms. Their sole aim would be to safeguard their turf, lest their clout gets diminished. Unless the Ministry of Defence (MoD) can break free of past shackles, the procedure is destined to undergo a few insignificant cosmetic changes only.

“¦ instead of achieving self-reliance in defence equipment, our imports are increasing at an alarming pace. In other words, DPP has been a total failure “¦

The stated aim of DPP is to – “ensure expeditious procurement of the approved requirements of the Armed Forces in terms of capabilities sought and time frame prescribed, by optimally utilising the allocated budgetary resources”. Additionally, the goal of achieving self-reliance in defence equipment is to be kept in mind. Unfortunately, not a single objective has been achieved to date. Optimum utilisation of the allocated budgetary resources is still a far cry – unexpended funds get surrendered and costs of contracted deals get doubled. Worse, instead of achieving self-reliance in defence equipment, our imports are increasing at an alarming pace. In other words, DPP has been a total failure and it is time radical reforms are undertaken to stem the current drift.

Five measures are suggested hereunder to simplify and streamline the procedure for expeditious processing of procurement proposals.

1. Reduction in the Multitude of Categories

Categorisation of procurement proposals specifies the route chosen for their further progression. DPP-2002 had specified three categories for the purpose – ‘Buy’, ‘Buy and Make’ and ‘Make’. Whereas ‘Buy’ means outright purchase of the complete requirement; ‘Buy and Make’ implies purchase of part requirement from a foreign vendor and production of the balance quantity under licence in India; and ‘Make’ denotes indigenous development of the equipment to meet the complete requirement. With every revision of DPP, the number of categories has increased – presently there are seven categories – creating utter confusion and complicating the procedure.

‘Make (High Tech)’ category, introduced in 2006 by splitting the erstwhile ‘Make’ category has already proved a total failure. Over three years have passed and not a single case has made any worthwhile progress. Similarly, the newly introduced ‘Buy and Make (Indian)’ category is full of contradictions and is doomed to be a non-starter. If an Indian company develops a system, either through its own developmental work or through collaboration with a foreign producer, the question of ‘Buy and Make’ does not arise at all. It will be a simple case of ‘Buy (Indian)’.

The illustration below shows commonality of a number of categories. 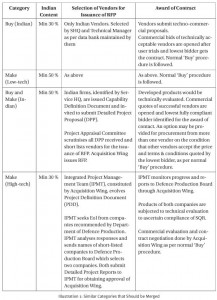 It can be seen that all the above four categories are essentially the same except for the selection process of vendors. In the case of ‘Buy (Indian)’, ‘Make (Low-tech)’ and ‘Buy and Make (Indian)’, vendors are selected by SHQ/Acquisition Wing. In the case of ‘Make (High-tech)’ cases, two production entities are selected by the Defence Production Board from the list suggested by the concerned Integrated Project Management Team (IPMT). All the above categories can be conveniently amalgamated into ‘Buy (Indian)’, albeit with flexibility in fixing minimum indigenous content on case to case basis.

Consequently, there should be only four categories – ‘Buy (Global)’, ‘Buy (Indian)’, ‘Buy and Make’ and ‘Make (DRDO)’. Scope of ‘Make (DRDO)’ should be enlarged to include development of high technology complex systems.

Currently, MoD is controlling every stage of the procurement procedure. Need for repeated reference to MoD even for innocuous matters is proving most frustrating and time consuming. As no decision making powers have been delegated, Headquarters Integrated Defence Staff (HQ IDS) and Service Headquarters (SHQ) have been reduced to doing secretarial work for MoD. For example, even the report of the Technical Evaluation Committee (TEC), prepared entirely on the basis of unsubstantiated assertions made by vendors in their technical proposals, is required to be approved by MoD. As it carries limited value, MoD should have delegated its approval and saved months of time.

HQ IDS possesses considerable capability to assume additional responsibility. After the issuance of Request for Proposals, the procurement procedure mandates two stage evaluation of competing equipment – technical and commercial. Only technically successful vendors participate in commercial evaluation. Technical evaluation is a purely user oriented activity and MoD has little to contribute as most functionaries in MoD do not possess even elementary knowledge of defence equipment or its exploitation in operations. Therefore, the complete gamut of technical evaluation should be delegated to the armed forces. 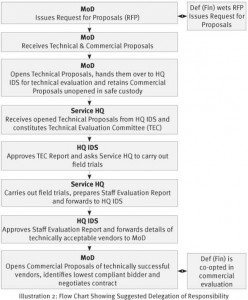 After opening technical proposals on the due date, MoD should hand them over to HQ IDS for undertaking technical evaluation as per the methodology given upfront in Request for Proposals (RFP). As hitherto fore, SHQ should continue to prepare TEC Report, carry out field trials to validate performance claims and prepare Staff Evaluation Report. However, power to approve TEC Report and Staff Evaluation Report should rest with HQ IDS. As MoD approves ground rules for field trials and their inclusion in RFP, it should scrupulously resist temptation to meddle in technical evaluation process.