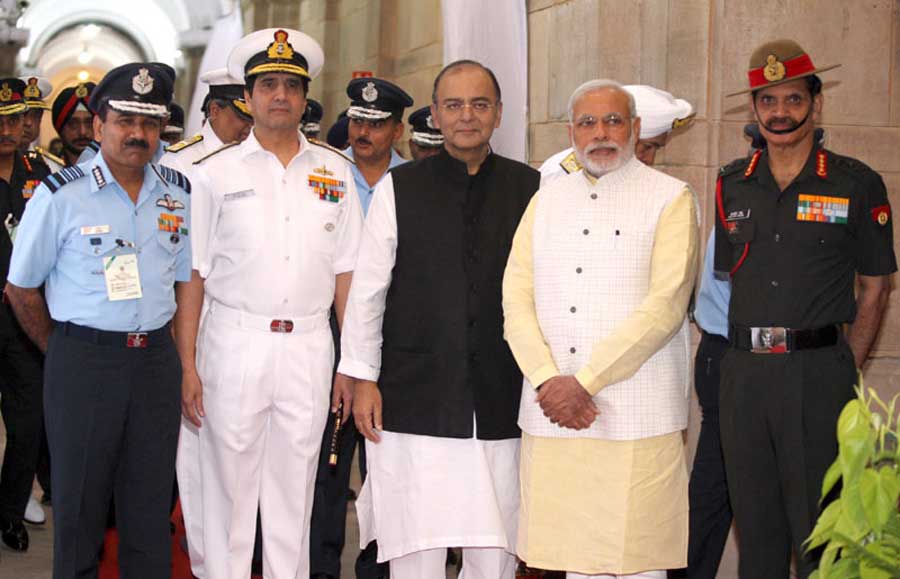 Prime Minister Narendra Modi’s first address to the combined commander’s conference went beyond the inane utterances that one has got used to in the last few years. Mostly, such meetings were addressed by reading out of a scripted message prepared by the Ministry of Defence. The proceedings used to be low in inspiration as well as aspiration; one would end up with a feeling that the government was either unaware of the importance of defence and security or simply not bothered.

Modi stressed the fact that even though open war between Nations is now improbable, conflict per se was attaining a new, amorphous and more dangerous dimension.

The address by Prime Minister Modi had his distinct stamp and signature; it exhibited a high degree of clarity of thought; he gave the Armed Forces a clear reading of his world view and spelled out the manner in which the forces would be expected to contribute toward the strategic goals of the new government.

PM Modi spoke of a “changing world” which would require a rethink on the economic, diplomatic and security policies. He spoke of “less predictable situations that will evolve and change swiftly wherein the threats will be known but the enemy will be invisible.” Beyond this, he advocated his well known emphasis on “technological and digital advancement and economy in the use of available resources.”

What Prime Minister Modi was trying to convey to the forces was the need to stay prepared for the famous fourth option – “When you discuss three options available to the enemy he will invariably use the fourth,” is a famous military dictum. He stressed the fact that even though open war between Nations is now improbable, conflict per se was attaining a new, amorphous and more dangerous dimension.  He was clearly referring to creation of adverse situations to the Nation’s security due to involvement, not only of inimical Nation states but also “non-state actors” sponsored by them. The armed forces and other agencies of the government would, therefore, be required to evolve innovative and joint responses to situations that would rise out of the blue.

The situation in the immediate and extended environment of the country gives ample reason to support the strategic vision enunciated by the Prime Minister. Pakistan is at a cross road where it can indulge in any type of adventurism including a nuclear stand-off. The rise of religious fundamentalism worldwide can impose problems of a unique nature. China’s rising power and increasing belligerence can take any unanticipated turn.

The inhibiting factor, however, is the emotion driven ideological divide between India and Pakistan which is nowhere near being bridged; it seems that there are no ways and means available to reduce the trust deficit.

The famous theory propounded by Clausewitz, “war is a continuation of politics by other means” has witnessed a slow death over the years post World War II. In the world of today, the absence of wherewithal to fight a conventional war and the advent of nuclear deterrence has made economy the spearhead of diplomacy. This does not mean that conflict has disappeared; it means that it has taken new and more dangerous forms. Attempts have been made to define these forms – low intensity conflicts, sub-conventional warfare, asymmetric warfare and the like; however, the context is now changing with the use of technology and cyber assets to an extent that was unimaginable just a few years ago.

The modern day objective of conflict is to create instability by playing whatever cards are deemed to be most effective and expedient. It is this wider definition of conflict marked by ambiguity, lack of honourable rules of engagement and the unknown that Prime Minister Modi dwelled upon in his address.

Defence diplomacy, a hitherto-fore unexplored domain in the Indian strategic thought process can go a long way in meeting the “rethink on economic, diplomatic and security policies” enunciated by Prime Minister Modi. India would benefit by progressing in the strategic realm from the existing “look inwards’ policy to embrace a concept of “outreach.”

India is well in sync with the modern global thought process of defence cooperation and preventive diplomacy as concepts that can mitigate security concerns. India has been strengthening its linkages through strategic engagement and economic cooperation globally.

The inhibiting factor, however, is the emotion driven ideological divide between India and Pakistan which is nowhere near being bridged; it seems that there are no ways and means available to reduce the trust deficit. This malaise plays an inhibiting role in defence diplomacy since the military accretions to counter Pakistan cause insecurity in the neighborhood.

A nation is identified by three main parameters – culture, economy and military might. In the modern context, any nation that has the money and the muscle is taken notice of in the world.

While staying militarily strong India has the onerous responsibility to convince the neighbouring countries about its intention is to play a benign role which accommodates regional concerns. India has to be convincing about its commitment to increasing international security and its obligation to create stable, sovereign and democratic regimes in the region.

To achieve this, defence diplomacy has to be made integral to the functions of the Ministry of External Affairs. The objective would be to evolve an integrated and coherent approach that successfully projects India as a responsible regional player and breaks the barrier of apprehensions that our neighbouring countries harbour against us.

Chief of Army Staff (COAS) General Dalbir Singh has called upon his commanders to continuously assess the situation in the sub-continent with respect to the force and security transitions that take place and their resultant effect on the Nation’s security.  This missive is apt but what is more significant is the manner in which the assessment is translated into integrated and meaningful action on ground.

A nation is identified by three main parameters – culture, economy and military might. In the modern context, any nation that has the money and the muscle is taken notice of in the world. However, achieving both does not solve the problem; it is their seamless application that is necessary. It is here that the military and civil segments of the government need to bring about a change in their mindset and align themselves to the required levels of integration.  Prime Minister Modi has set the pace, how things move on ground to the benefit of the nation remains to be seen.