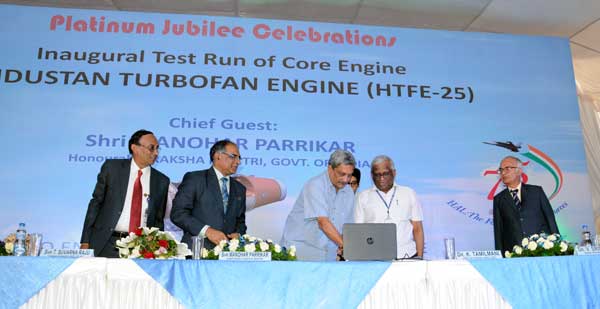 The inaugural run of the core of 25 kN indigenous Aero Engine (Hindustan Turbo Fan Engine – HTFE 25), was successfully completed in the presence of Defence Minister, Mr. Manohar Parrikar  at HAL’s Engine Division here today. He also launched the design and development project of Hindustan Turbo Shaft Engine (HTSE-1200) which can be used for helicopters.

Complimenting HAL for undertaking these projects, Mr. Parrikar said all out efforts should be made to achieve maximum in the aeronautical engineering with active participation of HAL and the private sector together. The recent expansion of activities in the aerospace sector as seen in HAL and has potential to turn India into aerospace manufacturing hub. The country would need 4000 to 6000 helicopter engines in the coming years and efforts of HAL to in this direction needs to be appreciated, he added.

Mr. Parrikar also mentioned the on-going HTT-40 trainer program of HAL and said the company is almost there with final activities going on in full swing at its hangars in Bengaluru.

Mr. T. Suvarna Raju, CMD, HAL said successful running of the 25 kN engine it is one of the major mile-stones achieved by the company in its platinum jubilee year contributing to Make-in-India efforts of the Government.  Also known as the Hindustan Turbo Fan Engine (HTFE-25), it can be used for basic, intermediate and advanced trainer aircraft.  The engine can also be used on business jets and five ton weight class aircraft in single engine configuration and on aircraft of up to nine ton weight class with twin engine configuration. 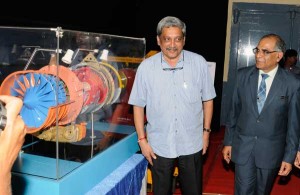 Aero Engine Research & Design Centre (AERDC), HAL, Bengaluru had taken up the Design and Development of a 25 kN thrust class turbofan engine for Basic Military Trainer Aircraft. HAL used its internal resources with an aim of producing indigenously designed and developed aero engines in a time frame of six years beginning from 2013. In the first phase of the programme, the design of the full engine and manufacture and testing of the technology demonstrator of the core engine are covered.  In the subsequent phases the manufacture and testing of the full engine will follow.

The HTSE-1200 can be used for helicopters of 3.5 ton class in the single engine configuration (e.g. LUH) and for 5 to 8 ton class in twin engine configuration (e.g. ALH, LCH). The engine develops a power of 1200 kW at sea level and can operate up to an altitude of 7 km.  This project too is undertaken by HAL with its internal resources with an aim of developing the capability of indigenous design and development of turboshaft engines.