Presently, India’s defence budget – 1.74 per cent of its GDP – is too low to undertake the capacity building necessary to deter China from contemplating another border war. The defence budget needs to be increased gradually to first 2.0 and then to 3.0 per cent of the GDP. India’s growing economy should be able to sustain this hike in the defence budget over a period of three to five years, especially if the government simultaneously shows the courage to reduce wasteful subsidies.

“India’s defence budget is declining in real terms, while China’s is growing at double-digit rates every year.”

In terms of real purchasing power, India’s defence budget has been declining consistently…

In an otherwise pragmatic budget for 2015-2016 that has been hailed as growth oriented, Finance Minister Arun Jaitley has not done enough to give the much needed boost to military modernisation. The proforma hike in the defence budget will not be adequate to make up the ‘critical hollowness’ in India’s defence preparedness pointed out by former Chief of the Army Staff, General VK Singh; nor will it help to meet the growing threats and challenges facing the country and India’s increasing responsibilities as a regional power.

The increase of Rs 24,357 crore ($3.92 billion) from Rs 222,370 ($35.86 billion, Revised Estimates for FY 2014-2015) to Rs 246,727 ($39.8 billion, Budgetary Estimates for FY 2015-2016) is too low to even allow for inflation, which is ruling at about 6.0 to 7.5 per cent. The Rupee’s steady slide against the US dollar to Rs 62 to a dollar has eroded its purchasing power considerably. Annual inflation in the international prices of weapons, ammunition and defence equipment is generally between 12 to 15 per cent. In fact, in terms of real purchasing power, the defence budget has been declining consistently. Each year’s delay in the procurement of operationally critical items substantially increases the burden on the exchequer.

India’s per capita expenditure on defence is less than $10, while the average expenditure of the top ten spenders in Asia is $800…

The Indian armed forces need to upgrade their command and control systems and substantially improve their intelligence, surveillance and target acquisition capabilities if they are to become proficient in launching effect-based operations in a network-centric environment riddled with threats to cyber security. It is well known that India plans to spend approximately $100 billion over ten years on defence modernisation.

It has been the practice to return large chunks of funds unspent year after year. The funds earmarked on the capital account were fully spent by the government for the first time in FY 2011-2012. In the current year (FY 2014-2015), the Ministry of Defence (MoD) was unable to spend Rs 12,622 crore ($2.04 billion) from the funds allotted for modernisation. Of this, an amount of Rs 5,992 crore ($0.97 billion) was diverted to the revenue account for routine expenditure. The remaining amount of Rs 6,630 crore ($1.07 billion) is once again proposed to be returned unspent to the exchequer.

The Parliament’s Standing Committee on Defence has repeatedly recommended the gradual raising of defence expenditure to 3.0 per cent of the GDP. However, the 13th Finance Commission had recommended that the nation’s defence expenditure should progressively come down to 1.76 per cent of the GDP by 2014-2015. Successive Finance Ministers appear to have decided to pay heed to this unjustifiable advice.

While India’s military modernisation has been stagnating, China’s People’s Liberation Army (PLA) and its sister services – the PLA Navy (PLAN), the PLA Air Force (PLAAF) and the nuclear strike force – the Second Artillery – have been modernising at a rapid pace for almost two decades, backed by a double-digit annual hike in the defence budget. Early on, in the Chinese Year of the Sheep and in the wake of the spring festival, the People’s Liberation Army (PLA), the PLAN and the PLAAF were given something to cheer about. The National People’s Congress (NPC) – China’s rubber stamp Parliament – hiked the defence budget for 2015-2016 by 10.10 per cent to $145.68 billion (Yuan 888.69 billion). This is over three times India’s planned defence expenditure. As China invariably conceals many items of expenditure on security, its actual expenditure is likely to be over $160-170 billion. 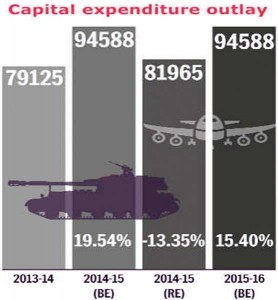 This is the fifth consecutive double-digit hike in the allotment for defence despite steadily declining growth rates. It is a clear signal from the regime led by President Xi Jinping and Premier Li Keqiang that China will continue its relentless march towards becoming the pre-eminent military power in Asia.

It also signals an enduring commitment to the strategy of military assertiveness in dealing with territorial disputes.

Last year, while presenting the Budget, Premier Li Keqiang had said, the government would, “strengthen research on national defence and the development of new and high-technology weapons and equipment and enhance border, coastal and air defences… We will comprehensively enhance the revolutionary nature of the Chinese armed forces, further modernise them and upgrade their performance, and continue to raise their deterrence and combat capabilities in the information age.” 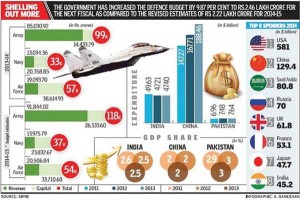 However, the marked emphasis on making China a maritime power is something that will set alarm bells ringing in Asian capitals. Li said, “China is a major maritime country. We need to draw up and implement a strategic maritime plan, develop marine economy, protect the marine environment, resolutely safeguard China’s maritime rights and interests, properly handle maritime disputes, actively expand bilateral and multi-lateral maritime cooperation and move close to achieve the goal of building China into a maritime power.” 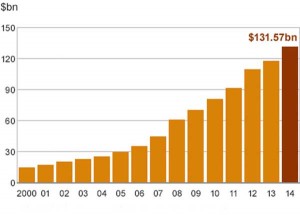 Lieutenant General Zhong Zhiming, a member of the National People’s Congress (NPC), was quoted by Reuters to have said, “We must develop our weaponry and raise the standards of treatment for military personnel, only then will we be able to really strengthen our strategic combat effectiveness…” Chen Zhou, a research scholar at the Chinese Academy of Military Sciences, said the increase was “moderate and reasonable” and in keeping with China’s defence needs.

Chinese analysts justify the steep annual hikes in the defence outlay as having been “caused by the sharp increase in the wages, living expenses and pensions of 2.3 million PLA officers, civilian personnel, soldiers and army retirees.” While this is true to some extent, there is far more to the steep annual hikes in the Official Defence Expenditure (ODE) than Chinese analysts are prepared to concede.

China’s neighbours and governments across the world remember the spectacular Anti-Satellite (ASAT) test successfully conducted by China in January 2007. They see pictures of the Liaoning aircraft carrier undergoing sea trials and are aware of the plans to acquire more submarines. The acquisition of SU-30 long-range fighter-bombers with air-to-air refuelling capability, the development of anti-ship ballistic missiles and a growing footprint in the South China and East China Seas have not gone unnoticed. A twenty-first century arms race is clearly underway.