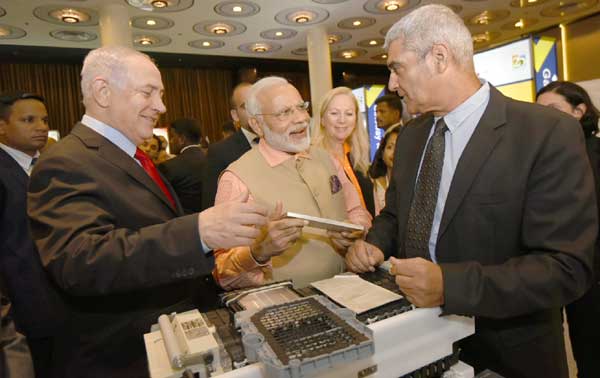 Israel has become a prominent defence partner for India in recent times. A string of defence deals between the two countries have benefitted Indian companies seeking advanced manufacturing technologies and Israeli companies looking at new defence markets. Israel has also been able to provide the Indian armed forces with weapons which it could not directly buy from its usual defence partners – Russia and US.

Indo-Israel relationship is booming like never before. Prime Minister Modi’s recent visit to Israel was termed historic by many observers and was much talked about in the global media. After all, this was the first visit by a serving Indian Prime Minister to the Jewish stronghold after 70 years of Indian independence. During the visit, India signed several agreements with Israel on science, agriculture and technology. The agreements also included the decision to create a bilateral technology innovation fund worth $40 million for research in industrial development, among other deals.

Though India formally recognised Israel after independence in 1950, it followed a balanced foreign policy towards West Asia with a pro-Palestine stand. India’s full diplomatic relationship with Israel was established only in 1992. The Kargil War in 1999 was a landmark moment in India-Israel defence cooperation as Israel supplied India with mortar ammunition, drones and laser-guided missiles along with intelligence inputs. In 2003, Ariel Sharon the then-President of Israel visited India becoming the first Israeli President to do so. Multiple bilateral visits by Ministers of the two countries have also happened in the last 15 years to discuss mutual areas of cooperation – defence, agriculture, science and technology.

A number of bilateral agreements and institutional arrangements have been executed between India and Israel over the years. The Table below lists out some important commercial and economic agreements between the two countries.

There has been a substantial growth in trade, economic ties and cooperation between the two countries since the establishment of formal diplomatic ties in 1992. Bilateral trade (excluding defence) has grown from $200 million in 1992-1993 to $6.1 billion in 2012-2013. Trade has come down slightly in the last four years with $5 billion worth of bilateral trade in 2016-2017. The trade balance stood in India’s favour at $1.1 billion in 2016-2017. Mineral fuel/oil (33 per cent) and pearls/ precious stones (33 per cent) were the major items exported by India to Israel in 2016-2017. India majorly imported pearls/precious stones (57 per cent), electrical machines (11 per cent) and fertilizers (nine per cent) from Israel in 2016-2017.

India is the sixth largest country in terms of defence spending, with defence sector accounting for two per cent of India’s GDP. However, due to lack of indigenously designed weapons, India has to primarily rely on imports for meeting its defence capital acquisition requirements. India is currently the world’s biggest importer of defence equipment. As per the Stockholm International Peace Research Institute (SIPRI), India accounted for 13 per cent of global arms import during the period 2012-2016.

Defence has traditionally been the biggest area of cooperation between India and Israel with annual defence deals worth over $1 billion in the last few years. Israel has emerged as the third biggest supplier of defence equipment to the Indian armed forces after USA and Russia. For Israel, India is the top destination for its arms exports. 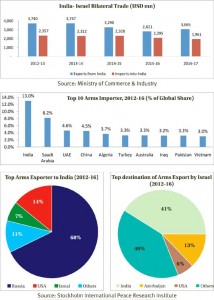 •  In July 2017, the Indian government was looking to purchase Spike, an Israeli anti-tank guided missile, designed and developed by Israeli company Rafael Advanced Defence Systems. Spike LR II is an advanced multi-purpose missile and can be launched from any Spike launcher. The estimated worth of the deal is $1 billion. Under the deal, the Indian Army will procure 321 Spike ATGM launchers, 8,356 missiles, 15 training simulators and associated accessories from Rafael on a single-vendor basis.

•  In May 2017, the IAI was awarded a $630-million contract for the supply of Barak-8 Long-Range Surface-to-Air Missile System (LRSAM) for four Indian Navy (IN) ships.

•  In May 2017, the Indian Air Force (IAF) conducted successful tests of the Israeli-made Surface-to-air Python and Derby (SPYDER) missile system. The SPYDER missile system also features an onboard radar for increased accuracy.

•  In April 2017, India inked a $2-billion missile defence contract with Israel for supplying advanced Medium-Range Surface-to-Air Missile Systems (MRSAM) to India. Barak-8, also known as MR-SAM/LR-SAM, is designed to defend against any kind of airborne threat – aircraft, helicopters, anti-ship missile and UAVs as well as cruise missiles and combat jets. It is equipped with advanced phased-array radar, command and control, mobile launchers and missiles with advanced radio frequency seekers. This deal was the single largest contract in Israel’s defence industry’s history.

•  India ranks first among drone-importing nations with 22.5 per cent of world’s UAV imports between the period 1985 to 2014. India has relied almost completely on Israel for its UAV needs over the years. Of the 176 UAVs imported by India, 108 are Searcher UAVs and 68 are Heron UAVs. The Indian government had cleared a deal for the procurement of ten-armed Heron TP UAVs worth $400 million from Israel Aerospace Industries in September 2015. The Heron TP is a Medium-Altitude, Long Endurance UAV with a range of around 7,400 kilometres and a maximum flight time of around 36 hours.

Defence ties between the two nations also extend to intelligence sharing on terrorist groups and joint military training. On the counter-terrorism front, both countries face significant terrorist threats, particularly after the 2008 Mumbai attacks in which several Israeli citizens were also killed. 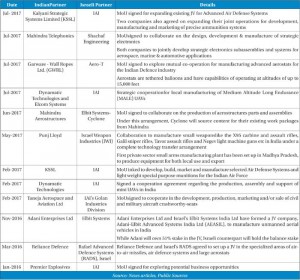 Both the countries are today sharing real-time intelligence on issues crucial to national security and boosting the counter-terrorism cooperation.

•  Recently both countries signed a “white shipping” agreement for data sharing on non-classified merchant navy ships or cargo ships. The agreement was signed during the meeting of the Chief of Indian Navy with Israel Defence Forces (IDF) Chief of Staff in June 2017.

•  Indian and Israeli government officials signed an intelligence-sharing agreement in July 2014, to fight radical Islamic extremism in the region together.

•  India has been holding regular talks with Israel on counter-terrorism within the framework of a Joint Working Group set up in the year 2000.

Israeli defence companies have also emerged as the preferred partners for private Indian companies looking to expand their presence in the Global A&D supply chain. Many joint ventures/technology alliances have been inked to produce small arms and defence systems in India in accordance with the ‘Make in India’ policy.

Indian Defence Offset policy was formally announced for the first time in 2005. Over the period 2005 to 2016, the Defence Offset Guidelines have been revised multiple times based on feedback from various stakeholders.

•  Offset clause is applicable for ‘Buy (Global)’ or ‘Buy and Make’ categories of procurements where the indicative cost of acquisition is Rs 2,000 crore or more.

With India signing multiple deals with Israel to procure military platforms, A&D players in India also benefit from the Offset obligations for the global vendors. Recently awarded offset contracts by Israeli vendors to Indian players given in above Chart

Prime Minister Modi’s historical trip is likely to give an unprecedented push to the efforts in building new bilateral relations and further solidify defence ties between the two countries. While security partnership may not be the only factor binding the two countries, it is the most important considering the alarming regularity of terrorist attacks taking place in India. Prevailing security dynamics and challenges in both the countries, clubbed with the rising forces of anti-state actors and terrorism, will in all likelihood, make the relations stronger.

Israel has become a prominent defence partner for India in recent times. A string of defence deals between the two countries have benefitted Indian companies seeking advanced manufacturing technologies and Israeli companies looking at new defence markets. Israel has also been able to provide the Indian armed forces with weapons which it could not directly buy from its usual defence partners – Russia and US.

Future defence cooperation between India and Israel is expected to focus on the joint development of military products that includes Transfer of Technology (ToT) and R&D from Israel, emphasising Modi’s ‘Make in India’ initiative. In fact, Israeli and Indian companies can also explore joint production of arms and ammunition for other countries. Indian companies looking for high-end defence technologies could also look at acquisitions in Israel. In 2016, Wipro Infrastructure Engineering (WIN) acquired Israel-based HR Givon, supplier of metallic parts and assemblies to the aerospace industry. More such acquisitions may take place over short to medium term.

Rapid digitisation in India has also made it susceptible to targeted cyber attacks. With advancement in technology, India should also look at institutionalising cooperation in the field of cyber security with Tel Aviv. This could especially help India meet its immediate goals of securing its cyber infrastructure and expanding opportunities for the country’s technology sector.