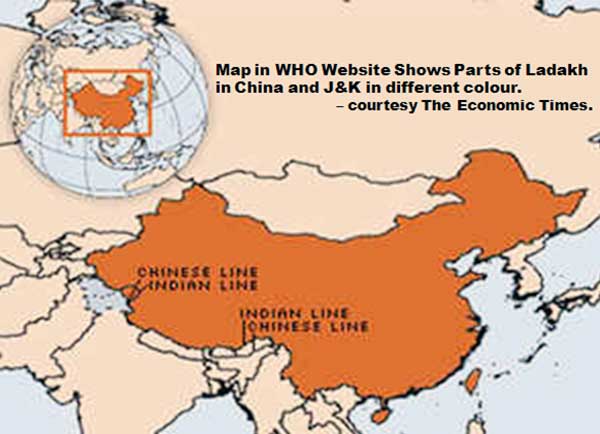 China’s guilt in releasing COVID-19 (by design or default)  ravaging the world has made the CPC launch an all out offensive to avoid culpability. On April 22, Germany’s Interior Ministry stated, “The German government is aware of individual contacts made by Chinese diplomats with the aim of effecting positive public statements on the Coronavirus management by the PRC.”

China blocked all probes into origin of COVID-19. Cheng Jingye, China’s ambassador to Australia recently warned Australia that its demand for probing spread of COVID-19 was dangerous and could lead to a consumer boycott of Australian wine, beef, tourism and Chinese students enrolling in Australian universities.

Chinese ambassadors have no compunctions about threatening the host country. During the Doklam Standoff, Luo Zhaohui, then Chinese ambassador to India had the audacity of threatening India. Sun Weidong, the present incumbent is aggressively denying COVID-19 origin in Wuhan. Playing rogue and undiplomatic behaviour helps promotions and bending retirement age of 65 for Chinese diplomats.

Luo Zhaohui, turned 58 in February, is China’s Vice Foreign Minister since mid-2019. Cui Tiankai, Chinese ambassador to the US who turns 68 in October recently called for “serious rethinking” of ties between the US and China, saying, “I think I should be hoping for more than just a pause in tensions, but really a serious rethinking of the very foundations of this important relationship.”

China’s denial offensive uses economic and psychological coercion, as also physical actions. China anticipated WHO would be vital for probing virus attacks. Hence Ethiopian minister and leader of the Ethiopian People’s Revolutionary Democratic Front, Tedros Adhanom was bought and installed WHO head with the support of a block of African and Asian Countries including China.

China gave WHO $20 million before COVID-19 outbreak and another $30 million after Trump stopped US aid WHO. WHO’s chief scientist has joined Tedros’s chorus that China didn’t delay information of the outbreak despite Taiwan informing WHO last December. WHO displays on its website a map (inset) showing part of Ladakh in China. With biological research labs in Wuhan sealed after PLA takeover, China has sabotaged any independent probe since WHO inputs would be required, unless WHO’s alibi can be proved malicious.

This would be Trump’s dilemma who wants to get to the origin of COVID-19. US intelligence says COVID-19 is not man-made. But its release certainly is man-made, which could be by design.

Post COVID-19, China has become more hostile against Taiwan and other neighbours. China’s Coast Guard vessel rammed a Vietnamese fishing vessel, Chinese jets approached Taiwan, a Chinese research ship is prowling Malaysian waters, and Beijing has given Chinese names to 80 geographical features in the SCS – 25 islands and reefs and 55 geographical locations, in  complete disregard to Vietnam, Taiwan, Philippines and Malaysia in SCS and Japan in the ESC.

China and the Association of Southeast Asian Nations (Asean) have agreed on a draft code of conduct (COC) that will lay the foundation for talks over the disputed South China Sea.  The International Court of Justice (ICJ) had ruled in July 2016 “that there was no legal basis for China to claim historic rights to resources within the sea areas falling within the ‘nine-dash line”.

China rejected the tribunal’s verdict. This is not surprising considering China has shown scant regards for international norms and laws like UNCLOS.

With two COVID-19 stricken US aircraft carriers in harbour, a Chinese strike force led by its aircraft carrier has been prowling the seas east of Taiwan and further south undertaking exercises. Tensions are high with more US ships as also Australian warship entering the area.

Therefore, Chinese physical actions across the Line of Actual Control with India cannot be ruled out since China views India an ally of US, and China wants to embarrass US while the latter is busy battling the virus.

China’s fear of being cornered for the virus outbreak is more because it acceded to the Geneva Protocol in 1952 and the Biological and Toxin Weapons Convention (BTWC) in 1984. Despite China’s deniability campaign, China remains the pariah to better part of the world. Why else would it not welcome an independent inquiry into the source of COVID-19?

China is also suspected of hiding data of COVID-19 infected Chinese dead. Hundreds of Chinese vehicles were spotted recently about 50 km from Demchok, Eastern Ladakh, on the Indian side of the LAC, which is rather suspicious in the Corona Virus times!!

Multiple court cases have been filed against China seeking damages due to the Coronavirus, in Texas ($20 trillion), Missouri (unspecified amount), as also Florida and Nevada. German newspaper ‘Bild’ states China owes Germany $162 billion in compensation for economic losses due to Coronavirus.

An Indian lawyer has sued China for $2.3 billion on plea that China’s attempts at downplaying the contagion was “treason against humanity”. A group of Nigerian lawyers are readying to sue China for $200 billion “loss of lives, economic strangulation, trauma, hardship, social disorientation, mental torture and disruption of the normal, daily existence of people in Nigeria.”

China rejects all such cases. Article 75 of the Constitution of WHO lays down that question or dispute concerning interpretation or application of this Constitution not settled by negotiation or by the Health Assembly are to be referred to the International Court of Justice (ICJ). However, China has refused to accept verdict of ICJ in the past.

Articles 6 and 7 of International Health Regulations of WHO mandate timely notification and information sharing obligatory on the country where an outbreak takes place. This is where China has faltered China’s economic coercion forced EU in water down its report on China’s disinformation campaign.

The New York Times says an EU diplomat messaged colleagues saying Beijing was “threatening with reactions if the report comes out”. Three other sources confirmed that Chinese diplomats pressured EU officials. But Time magazine published extracts of the original EU report that says, “China has continued to run a global disinformation campaign to deflect blame for the outbreak of the pandemic and improve its international image. Both overt and covert tactics have been observed.”

China will continue pressurizing countries and destabilize governments and leaders considered unfavourable. Donald Trump says China doesn’t want him re-elected because of the trade war. China would like to induce chaos, weakening opponents militarily and economically, usurping their strategic space. In doing so, China will also attempt taking over global data network for assuming strategic control.

COVID-19 would affect China’s BRI but not in countries like Pakistan and Myanmar. Like it has done with EU, China is capable to coerce other countries and groupings like ASEAN where Cambodia and Laos stand debt-trapped. Over the years China had became the manufacturing hub of the world. Many Chinese products were of low quality and in comparison, inexpensive, as China banked on the ‘use and throw’ policy which worked.

Chinese goods flooded the world markets. But in sectors like networking devices and equipment, China produces 75 percent of mobiles and 90 percent of PCs world-wide. Foreign firms flocked to  China, many of who want to exit in wake of COVID-19. China will likely employ multiple means to stop the exodus. With 6.311 million outbound Chinese tourists during New Year 2019, China wants to use tourism in coercing counties to toe Beijing’s line.

China’s rogue behaviour merits countries reduce their dependence on China and practice economic distancing with China. This is no easy task considering the heavy interdependence on trade. Countries need to boost indigenous manufacturing and even reduce procuring raw material from China.

Special focus is required for indigenous IT networking solutions and products rather than banking on China. One handicap in doing so would be the global corporates which are bound to profits and not their country. One example is Bill Gates siding with China and WHO despite the US stand and also his country hit hardest by COVID-19. Obviously Bill Gates foremost interest is to promote Microsoft products in China.

Ban of Chinese products would be detrimental to the norms of the WTO. Here the people can make the difference and bypass their governments by choosing indigenously produced goods.

India cannot ignore China’s renewed focus on illegally claiming Arunachal Pradesh plus Chinese push in Pakistan-POK: presence of some 14,000 PLA troops in Gilgit-Baltistan (GB); Pakistan leasing GB to China for 50 years –reports in regional Pakistani media; establishing of Chinese posts in Shaksgam valley (illegally handed over by Pakistan to China in 1963) and road joining up with Karakoram Pass; Chinese projects in close proximity of LOC including in Kishanganga (Neelum) Valley and PLA cadres even sighted on Pakistani posts; Gwadar handed over to a Chinese company for 49 years with no taxation and port duties; PLA marines in Gwadar; Chinese SEZs along the CPEC running parallel to the border with India; Jiwani upcoming joint China-Pak military post, and; China’s SEZ in proximity of Sir Creek.

Few (why not all) Indian manufacturers are reportedly looking for alternative avenues to procure raw material – termed ‘China Plus One’. This must be expanded to multiple sources, not just one. Dependency on China for annual $70 billion imports mainly in consumer durables, auto components, pharmaceuticals, electronics etc must be reduced, for which a time-table must be worked out.

The UP Chief Minister has proposed tailor-made facilities to major US corporate looking to shift factories and bases from China to UP. UP government held video conference with some 100 investors and companies, offering capital and land subsidy plus host of other incentives. Defence firms have been offered use of the Defence Corridor in UP.

The Prime Minister recently called upon states to woo global companies wanting to exit China. But Centre too could examine establishing SEZs rather than leaving this exclusively to states. In all this, we must ensure that ‘indigenization’ does not suffer in any manner.

The joint statement by Presidents Trump and Putin issued on April 25, 2020, to commemorate 75th Anniversary of the Meeting on the Elbe read, “The ‘Spirit of the Elbe’ is an example of how our countries can put aside differences, build trust, and cooperate in pursuit of a greater cause.  As we work today to confront the most important challenges of the 21st century, we pay tribute to the valor and courage of all those who fought together to defeat fascism.”

With Russia too hit by the pandemic, the situation merits US and Russia joining hands to confront China. But the CIA and America’s deep state would not let this happen. Trump initially had tried to get close to Putin but his efforts were cut short and he ended up imposing series of sanctions on Russia. China-Russia teaming up is to big disadvantage of US especially in the developing situation, which Washington somehow doesn’t acknowledge.

One thought on “Dealing with China”