DCNS and Thales today announced the launch of a supplementary phase for the Technology Demonstration of a system for automatic landing and deck-landing of UAVs (D2AD), which has just been notified by the French Defence Procurement Authority (DGA). Sea trials of the demonstrator are planned for 2012 using a French Navy frigate and a Boeing, H-6U Unmanned Little Bird rotorcraft. 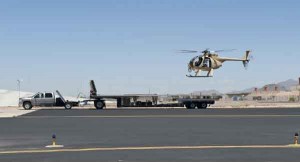 This notification follows on from the successful landing and deck-landing trials conducted in the United States last June and July using a moving platform. This new design study is to be conducted in the context of risk reduction for future tactical UAV programmes to be managed by the DGA on behalf of the French Navy and the French Army*.

The next trials are aimed at demonstrating automatic deck-landing of a UAV on the deck of a frigate in total safety even in high sea state and low visibility.

The system must demonstrate its capability for integration of all the operational constraints inherent in deck take-offs and landings, similar to those of piloted helicopters, but in fully automatic mode.

This automatic system for take-off, landing and deck-landing of UAVs is the fruit of the joint expertise of Thales and DCNS. Thales is responsible for the positioning system and its interface with the UAV system, the supply of a UAV demonstrator system and slaving of the flight path along a trajectory. DCNS is responsible for predicting the vessel motions, the harpoon system as well as the interface and integration with the vessel.

The D2AD automatic deck-landing system constitutes a key stage in the run-up to the use of UAV rotorcraft by naval forces, for operations over land and sea. It provides innovative high-performance solutions which meet operational needs. The availability of an automatic on-board take-off and landing system, without the need for an external pilot, opens up the possibility of intensive use of UAV rotorcraft, at minimum cost and a high level of safety.