Ayman al Zawahiri’s declaration that al-Qaeda was opening an office in the Indian subcontinent poses a significant threat to India and other countries of the region. India needs to reassess the likely modus operandi of al-Qaeda in the Indian Subcontinent (AQIS) and the role of terrorist groups operating in India associated with the activities of al-Qaeda. Harkat-ul-Mujahideen (HUM), a Pakistani jihadist group which is linked to al-Qaeda is likely to lend full support to AQIS. It is already active in South Asia, and it is reported to be running several training camps in Afghanistan. The US State Department has described HUM as ‘a Pakistan-based terrorist organization that seeks the annexation of Kashmir into Pakistan’.

Major policy miscalculations of the Western powers in the past are directly or indirectly responsible for the rise of the IS, which is now threatening to damage the fabric of modern civilisation.

The ISIS, or simply IS, operating across the Iraqi-Syrian borders has dramatically changed the global security environment. It is currently in occupation of nearly one-third of Iraq, a swath of land from outskirts of Baghdad to Aleppo, in Syria, in the east and areas bordering Lebanon and Turkey in the west.

Barbaric acts against unarmed civilians, mass executions, catastrophic bombings and massacre of minorities in the areas occupied by the IS indicate that it may soon become a major threat to existing international world order. Joint action by regional and international powers is urgently needed against the IS, along with the revival of the global war against terror through the UN and international counterterrorism agencies.

Major policy miscalculations of the Western powers in the past are directly or indirectly responsible for the rise of the IS, which is now threatening to damage the fabric of modern civilisation. However, the ISIS is still not fully organised to accomplish its objectives even in Iraq and Syria, although it has about 20,000 to 40,000 well-trained fighters at its command, equipped with sophisticated equipment. At this point of time, it does not pose an existential threat to the Baghdad regime, which has the backing of the United States and other Western powers besides Iran and Kurds. However, if the IS is allowed to consolidate its gains in Iraq- Syria, it will pose an existential threat to Iraq, Lebanon, Jordan and other states of the region.1

The US has recently declared that it is building a coalition for a coordinated diplomatic, economic and military action to crush the ISIS. US president Barack Obama’s four-pronged strategy of air strikes, support to local proxies, defence against the IS’s attacks through intelligence and counterterrorism will, however, take some time to show results, and how far this strategy will succeed in crushing the IS is not clear yet. Extensive and sustained intelligence backing, logistic support and air strikes from various members of the coalition would be required to contain Islamic militants and prevent the ingress of IS Islamists in other parts of Asia.

It is widely believed that the IS has support of Saudi Arabia, Qatar and Kuwait, which are the main advocates of the Salafi-Wahhabi version of Sunni Islam.

The IS demands strict adherence to Wahhabi-Salafi ethos and acceptance of Caliph Baghdadi as the supreme commander of all Muslims. The IS declares that Muslims who in any way fail to conform to their brand of Islam are in fact infidels who should be put to sword, their wives and daughters acquired and violated and their possessions destroyed or confiscated. Those meriting this punishment include the Shi’ites, the Sufis and liberal Muslim societies.

The rapid advance of the ISIS into Iraq and proclamation of a caliphate on the first day of Ramadan, calling in question the existing borders of states in the region, shattered peace in the entire region and wiped out the gains of the US-led victory in Iraq. The IS poses a threat to most countries of the region, including Arab countries, but it poses a threat mainly to Iran, Iraq and other Shia-dominated areas. It is widely believed that the IS has support of Saudi Arabia, Qatar and Kuwait, which are the main advocates of the Salafi-Wahhabi version of Sunni Islam.

The easy military victories and extreme brutality against unarmed civilians and prisoners shocked the world, but their state-of-the-art videos, ground images, shot from drones and multilingual Twitter messages came as a great surprise. The IS is sending ‘multilingual Twitter messages’ to all parts of the globe to recruit jihadi fighters, threaten enemies and loudly proclaim the establishment of a caliphate. A recent ISIS video shot taken from a drone has a voice-over that says that ‘the Islamic state is expanding and that Jerusalem’s Aqsa mosque is “only a stone’s throw away”.’2

London Connection of the ISIS

Surprisingly, Tower Hamlets in London has been converted into a hotbed of anti-Shia politics and a stronghold of Sunni fanatics who support the ISIS. According to a report in Guardian in August, ‘some 20 Asian youths had gathered around the Tower Hamlets gates, where a black flag, resembling that of ISIS, was hoisted. The flag was subsequently taken down by a Catholic nun.’

Given the moderate Islamic culture of Indian Muslims, AQIS is unlikely to get much support in India and will certainly fail in its attempt to establish a base here.

Tower Hamlets is one of many centres where the Wahhabi are recruited, but it is the largest and most dominant area of ISIS support. The Telegraph, in an article, reported Khalid Mahmood, member of Parliament from Birmingham, saying that ‘1,500 British Muslims have gone to wage jihad since 2011, as opposed to the 400-500 the government estimates . . .’3

Al-Qaeda in the Indian Subcontinent

Ayman al Zawahiri’s declaration that al-Qaeda was opening shop in the Indian subcontinent suggests it is retreating from west Asia in face of opposition from the IS. It is believed that the US had alerted the Indian authorities about al-Qaeda’s plans to expand operations into the Indian subcontinent late in August, but little notice was taken of this warning by the counterterrorism agencies in India. Al Zawahiri’s declaration poses a significant threat to India, and it must reassess the likely modus operandi of AQIS and the role of terrorist groups such as HUM, Harkat-ul-Jihadal- Islami (HuJI), Students Islamic Movement of India (SIMI) and Indian Mujahideen (IM), which are linked to al-Qaeda.

The declaration of a ‘caliphate’ and Baghdadi’s assuming the title of Caliph Ibrahim, expelling al-Qaeda from the ISIS, have put a question mark on the relevance of al-Qaeda, which until now spearheaded the global jihadi movement. Now it may not be possible for al-Qaeda to reestablish itself easily in South Asia or elsewhere and attract new adherents and supporters. So far, only a couple of al-Qaeda branches spread around the world have declared their support for AQIS, prominent among them being al-Qaeda in the Arabian Peninsula (AQAP). AQAP said it gives ‘special congratulations’ to its ‘mujahideen brothers in various trenches’ and especially ‘our Sheikh and good Emir, Dr. Abu Muhammad Ayman al Zawahiri’, as well as ‘the good Sheikh Asim Umar’, who was named the emir of AQIS.4

Given the moderate Islamic culture of Indian Muslims, AQIS is unlikely to get much support in India and will certainly fail in its attempt to establish a base here. 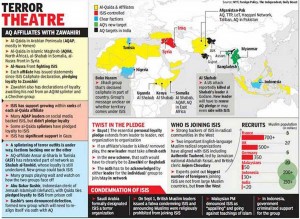 HUM, a Pakistani jihadist group linked to al-Qaeda, is likely to lend full support AQIS. Several al-Qaeda leaders have risen from the ranks of HUM. It is already active in South Asia and has been responsible for facilitating some terrorist attacks in India. It is reported to be running several camps in eastern Afghanistan for training terrorists. The US State Department has described HUM as ‘a Pakistan-based terrorist organization that seeks the annexation of Kashmir into Pakistan and poses a direct risk to U.S., Afghan, and allied interests in Afghanistan.’ According to them, ‘the group operates in Pakistan, and engages in terrorist activity in Kashmir, India, Pakistan, and Afghanistan; its membership is estimated to have several hundred armed supporters. HUM has conducted a number of operations against Indian troops and civilian targets in the Kashmir region in the past.’

HUM is based in Pakistan and reported to have support of the Pakistani military and Inter-Services Intelligence (ISI). Several al-Qaeda leaders have risen from the ranks of HUM.5