Home  >  News  > Homeland Security  >  Countering Naxalism: What is to be done now?

Countering Naxalism: What is to be done now? 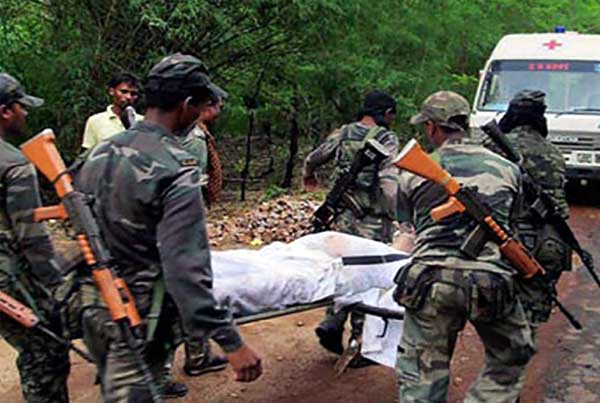 The latest outrage in which the Naxals killed over 25 Policemen of the CRPF, ought to be a wake-up call. But will it be? Given the past experience (like the attack in April 2010 that killed 75 Policemen) it seems rather remote. The killing of CRPF persons on 24 April 2017 near Sukma in Chattisgarh, was directly linked to the Naxalite’s efforts to stall the on- going road construction project. With these attacks Naxalites hope to scare away workers and contractors from the project. The aim appears to protect its bases in forests and prevent the govt. from reaching out to the Tribals.

Recent Sukma attack or 2010 Dantewada incidents are tactical reverses but have wide ranging strategic implications for all other areas of Naxal influence. For the Indian state has been shown to be ineffective and weak.

In August 2006, nearly 11 years ago I had led a group of investigators in Chattisgarh and carried out on ground study. The recommendations were sent to the appropriate authorities for action. These were,

Former Defence Minister AK Antony is on record of having said that matters of strategic decisions about measures to tackle the Naxals are not subject of public debate. That is indeed the prerogative of the govt. But such is the dust raised by the bleeding heart liberals in media and the universities that public ought to be educated on certain nuances of the use of force. Let us not kid ourselves, the Naxal have launched a guerrilla war against the Indian State and it is the rules of war that apply and not IPC or CrPC.

The debate on use or non use of certain forces has centred on the fear of co-lateral damage to the total exclusion of the psychological impact of such incidents. Psychological aspect of warfare, is THE MOST CRUCIAL facet of success. Yet being intangible and ill-defined is neither well understood nor appreciated. Raising the morale of own soldiers/policemen and lowering that of the adversary is primarily the single biggest responsibility of the leadership- political as well as military.

According to late Lt Gen Eric Vas, an authority on insurgency, the battle has to be fought on five fronts simultaneously, namely economic, political, psychological, social and military.

Recent Sukma attack or 2010 Dantewada incidents are tactical reverses but have wide ranging strategic implications for all other areas of Naxal influence. For the Indian state has been shown to be ineffective and weak. This has led to raising the morale of insurgents and lowering that of the security forces. All discussions on use of various instrument of coercion have to be in this context. According to late Lieutenant General Eric Vas, an authority on insurgency, the battle has to be fought on five fronts simultaneously, namely economic, political, psychological, social and military. Use of force is thus only one of the fronts and to be successful it has to be in consonance with the other four. This has to be clear right at the outset. That does not mean that force is unimportant. In fact, in order to get the other measures and strategies in place, control over violence is a pre-requisite.

The debate on ‘adequate’ force ( not minimum force) has to be conducted keeping in view these parameters and not extraneous considerations like media exposure, international image, fear of Human Rights groups, and approval of JNU students or views of the ‘one novel wonder’ authoress.

The element of air power that would be extremely useful in this fight is surveillance and detection. I do believe that technological advances today have made it possible to track group of people moving even through the jungle terrain. This will mitigate somewhat the lack of intelligence that the security forces face.

The area of Naxalite operations are very sparsely populated and are unlike the Vietnam delta. With weapons of greater accuracy and precision available today, it should be possible to avoid co-lateral damage and innocent civilians becoming victims. In the strategy of area domination, the police forces would be located in and around population centres. Thus use of airpower would be against the isolated Naxals.

…limited use of airpower would improve intelligence, force Naxals to operate in small groups and in conjunction with area / population domination isolate them from their support base.

The use of surveillance and tracking will also force the Naxals to break up in smaller groups, making it that much difficult to stage attacks like the one in Sukma or Dantewada. For instance if armed helicopter support was indeed available to the hapless CRPF men, then the moment they came under fire from hilltops, the helicopters could have come to their help by machine-gunning the Naxals located on hilltops.

Thus limited use of airpower would improve intelligence, force Naxals to operate in small groups (and thus reduce threat to larger bodies of Para military forces) and in conjunction with area/population domination isolate them from their support base. But the biggest gain would be the raising of morale of own forces and lowering that of the Naxals since they have no counter to the armed helicopters. Indian armed forces operating under the UN mandate are used to working under very strict operational guidelines of dos and don’ts. It should be possible to thus use the air power and yet not alienate the innocents.

It is a matter of regret that over 11 years ago as a result of my study in Chhatisgarh, I had recommended establishment of radio stations and distribution of free radio sets to the tribal’s. This would give the govt a powerful media to connect with the Tribal and counter Naxal propaganda. In fact even before the operations started, a major effort should have been mounted to expose the Naxals and warn the Tribal sympathisers of the consequences of support to the rebels. This very important function of leadership was not carried out. Even now it is not too late and action should be initiated on these lines.

Aim of counterinsurgency is to bring about a behavioural change in targeted population. In short move them away from armed politics to peaceful participation. It is also called struggle for hearts and minds of people.

If the twin measures of developmental effort and show of force are implemented simultaneously, the situation can indeed be brought under control quickly.

We must understand that ideologically, the counter insurgents are always at a disadvantage. The insurgents can promise a Socialist Utopia. While the counter insurgents become either status-quo supporters or hark to status quo ante. Neither of this can compare with the dream of mythical ‘Shangri-La’ that the insurgents paint and many of their urban arm-chair supporters swallow this. This underscores the importance of propaganda and psychological aspects of counter insurgency. But none of this would be of any use unless there is honest governance and genuine efforts to help out the tribal’s.

If the twin measures of developmental effort and show of force are implemented simultaneously, the situation can indeed be brought under control quickly. The armed air operations could then well be suspended if the Naxals show inclination to come to negotiating table and agree to give up violence. In the short run there is no substitute to wielding the big stick.

Our countrymen need to be reminded that the original Naxalite revolt in Bengal in 1970 was brought under control through operations by the Indian Army and not Police forces.

One thought on “Countering Naxalism: What is to be done now?”