Victory in a conflict in the current century will be decided by Asymmetry in Fire Power. Israel and the US have constantly used technology to multiply their capabilities.  The Hamas operating from the Gaza strip have been sporadically firing at the Israeli settlements since 2001. They have fired a variety of ammunition on Israeli settlements commencing with the Qassam-1, 60 mm mortars having a range of four km followed by Qassam-2, 150 mm rockets ranging 10 km and finally Qassam-3, 170 mm rockets with a range of 12 km in 2005. Thereafter the Iranians in 2008 supplied through the Hezbollah militant group in Lebanon the potent 122 mm GRAD BM-21 rocket with a maximum range of 45 km.

There is a need for our scientific establishment to examine the details and to develop the system to counter the Pakistani Tactical Nuclear Weapon.

Last November (2012) they fired a 333 mm Fajer Iranian rocket with a range of 75 km. This enabled Hamas to engage areas of Jerusalem and Tel Aviv. The Israelis with assistance from the United States developed weapon systems to counter these projectiles, rockets and missiles. It is pertinent to note that Iran has constantly threatened Israel with its missiles. Necessity is the mother of invention and it would be interesting to examine the development of Anti-Ballistic Missile system in Israel to counter the Iranian threat.

Israel has a population of about eight million which is half the population of Mumbai. Therefore she has to win conflicts using high end technologies which can nullify the effect of shells, rockets and missiles. Dedicated research has led to development of three weapon systems. These are the Iron Dome, David Sling and the Arrow missile.

The Iron Dome was used by the Israeli Defence Forces in their current offensive titled “Pillars of Defence” against the Hamas in November 2012.  The system is diagrammatically illustrated below 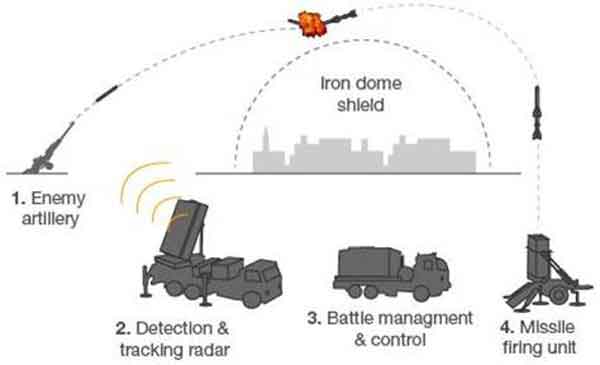 Broadly there are three components in the system which comprises of the detection and tracking radar, the Battle Management and Control and finally the Missile firing unit. The Iron Dome is manufactured by Rafael Advanced Defence System and was developed in 2005 with inductions since 2011. Each missile weighs 90 kg, has a length of 3m and diameter of 160 mm. The interceptor has a proximity fuze and the launch platform comprise of three launchers each carrying 20 interceptors. On 07 April 2011, the system first intercepted a Grad BM-21 rocket fired from Gaza. In 2012 more than 400 rockets including theFajer rocket with a range of 75 km. The Jerusalem Post has reported on 10 March 2012 that the system shot down 90 percent of rockets launched from Gaza. In November 2012 during the Israeli Operation Pillar of Defence Iron Dome again proved its worth and countered Hamas rockets.

Pakistani nuclear weapons are with their Armed Forces and this gives them an opportunity to utilise it in their strategic interest.

David Sling is being developed by Israel along with Raytheon of US to intercept long range rockets and Cruise missiles with ranges between 70 and 250 km. The missile is currently under development and is likely to be mounted on the Spyder anti aircraft vehicle. This underwent a development test on 25 November 2012 and the test was a success. The David Sling is also known as the Magic Wand and would be a good medium interceptor.

Israel’s main interceptor is the Arrowmissile. The system is a joint development between Israel and the United States. The system consists of a hyper sonic Arrow missile interceptor, the Elta Green Pine Early WarningActive Electronically Scanned Array Radar, the Citron C4I2 centre of Tadiran and the Israel Aerospace Industries Brown Hazelnut launch control centre. The system is capable of being transported on erector launchers. The first operational Arrow battery was deployed in 2000 and on 25 Feb 2013 Israel tested its latest version Arrow 3. The two stage missile is equipped with solid propellant booster and sustainer rocket motors. The missile attains a speed of Mach 9 and intercepts at the optimum intercept point. Each system is capable of detecting and tracking up to 14 incoming missiles. Arrow 3 is capable of countering the Iranian Shahab 3 as also the Syrian Scud missile. With financial and technological assistance from the US Israel is constantly developing systems to counter shells, rockets and missiles.

The Indian Armed Forces proposes to carry out Surveillance and Target Acquisition of Artillery shells and rockets by use of weapon locating radars and sound ranging systems. We have our developments on the Ballistic Missile Defence Programme based currently on a two tiered system consisting of the Prithvi Air Defence (PAD) missile for high altitude interception and the Advanced Air Defence (AAD) missile for lower altitude interception. The two tiered shield once fully tested will give us the capability to intercept any incoming ballistic missile launched 5000 km away.

Pakistan plans to use Nasr against our offensive forces…

It is pertinent to note that none of these systems cater for detecting and engagement of Nasr which is Pakistan’s Tactical Nuclear Missile with a range of 60 km. This is a single staged solid rocket and possibly could be engaged effectively by the Iron Dome system. There is a need for our scientific establishment to examine the details and to develop the system to counter the Pakistani Tactical Nuclear Weapon. The Pakistanishave clearly stated that they would use Nasr in case India launches a pro active conventional attack. This is viewed against possible ambivalence on the part of India to retaliate with nuclear weapons on being attacked with Nasr by Pakistan. In such a situation a counter to Nasr is essential to provide flexibility to our operational commanders.

Developing a system or acquiring it involves a deliberate process in our country. Pakistani nuclear weapons are with their Armed Forces and this gives them an opportunity to utilise it in their strategic interest. Pakistan plans to use Nasr against our offensive forces and would not hurt our civilian population. Accordingly there is a need to develop a suitable interceptor to neutralise the Pakistani option of using Tactical Nuclear Weapons.