Constituents of Strategic Communications of the Islamic State?

It is noteworthy that an Indian, Mehdi Masroor Biswas (@ShamiWitness), who figures in the top 10 Twitter accounts of the Islamic State, has been one of the top information campaigners for the Islamic State. He has since been arrested in December 2014 by the Indian intelligence agencies. Another important tribe or layer among these Twitter accounts includes accounts which were handled by women known as Umm. Umm is a honoriûc name used to address a woman as the mother of a certain person, usually the oldest son. These Umm accounts act as disseminators of information, passing content and information from other accounts. Klausen’s study was able to identify 130 such Umm operating in and around Iraq and Syria, clearly pointing to an increased role of women in support roles never seen before.16 Apart from using social media networks to cascade information, the Islamic State publishes various online magazines and reports, mainly targeting the Western audience.

Dabiq is the name of a place in Syria where the prophesied final battle and apocalypse unfolds. The Islamic State publishes an English magazine called Dabiq (there are 11 issues as of now) and Islamic State Report, which provide details about the activities of the Islamic State in different parts of Iraq and Syria. The first issue of Dabiq, entitled ‘The Return of Khilafah’, was published in July 2014 by al-Hayat Media Center, and there are 11 issues till date. Dabiq is a glossy magazine, which appeals to the Western jihadis. The contents include religious and ideological aspects, the Islamic State’s military operations and political affairs across the world.

As of May 2015, 35 groups across the globe have pledged their allegiance or support to the Islamic State.

This huge apparatus is ostensibly managed by a person named Ahmad Abousamra, born in France and educated in Massachusetts. According to an Independent Strategy and Intelligence Study group report, Abousamra is highly educated, with his schooling from Xavier Brothers Catholic School in Westwood and then Stoughton High School.17 He has graduated from North Eastern University with a degree in computer technology and was employed at a telecommunication company.

Blessed with this well-organised paraphernalia, the Islamic State has used this for different objectives, such as radicalisation, recruitment, funding and psychological warfare and, more importantly, for countering the jihadi propaganda of other groups, such as the al-Qaeda. Given the reach of this network, the Islamic State has made an effective use of it to attract more partners and affiliates who have owed allegiance. As of May 2015, 35 groups across the globe have pledged their allegiance or support to the Islamic State (See Table 3).26 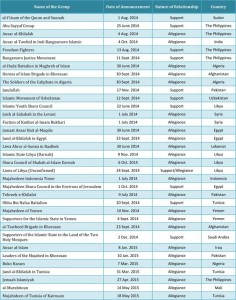 Open-source publications estimated the broad range from 7,000 to 10,000, while others estimate the numbers to be at 25,000 fighters on the higher side during 2014.18 Its rank-and-file members are drawn from fighters who were previously with al-Qaeda, some former Baathists in Iraq and soldiers of the Saddam regime army. However, all the open source reports had indicated at that time that foreign participation in the Islamic State was increasing steadily.

The current levels of the foreign fighters in the Islamic State are difficult to ascertain given its recent and sudden resurgence.

In the context of foreign fighter participation, there is no definitive data on participation levels, with varied estimates from different open source publications in 2014. While one source estimates foreign fighter levels to be at least 7,500 in Syria19, another report (by the International Centre for the Study of Radicalisation [ICSR]) claimed that there were up to 11,000 foreign fighters in Syria from 2011.20 However, this is the combined strength of all groups put together, i.e., the Islamic State, the al Nusrah front and Ahrar Al-Sham.

This number has been steadily growing since 2006–2007. The current levels of the foreign fighters in the Islamic State are difficult to ascertain given its recent and sudden resurgence. A report based on seized documents popularly known as Sinjar records provides an assessment on foreign fighter participation in the Iraqi conflict. This report, derived from analysing 700 seized profiles of foreign fighters in a place called Sinjar in Iraq, states that Saudi Arabia tops the list for participation of foreign fighters, with more than 244 fighters of Saudi origin, followed by Libya, Syria and Jordan.20 However, in 2014, this population has swelled to 3,500–4,000 Western- and European-origin fighters who have gone to Syria, apart from the Arab-origin volunteers.22

A 2015 report by the ICSR, revising its 2013 estimates, claims that the estimated foreign fighter population of the Islamic State in Syria and Iraq is around 20,370, including 4,000 Western recruits. This mobilisation is the largest mobilisation of foreign fighters in Muslimmajority countries since 1945, even surpassing Afghanistan.23

Given this ever-growing inflow of foreign fighters who are urban, tech-savvy, educated jihadis, the efficient use of social media as propaganda machinery by the Islamic State and its cataclysmic growth is understandable. All these Western foreign fighters have become de facto brand ambassadors of the Islamic State, disseminating information within their network. The key to its success is the literacy of the cadres of the Islamic State, especially the Western-origin fighters. Other groups, such as al-Qaeda, did not have the kind of literate population in their fighter stables. This elite pool of hard-core fighters has used the Internet not only for recruitment but also for psychological and cyber warfare.

The primary target audiences of Islamic State’s media campaign are the West and Islamic communities in the West.

According to an Independent Strategy and Intelligence Study Group, the Islamic State released a link with the names and addresses of 100 US military personnel living in the United States, encouraging attacks by lone wolfs. Another post in September 2015 reads, O Cross worshippers, Lone Wolfs will hunt you down in America’s Streets, coinciding with the anniversary of 9/11 attacks.24 The Islamic State also has used its educated human resources for conducting cyber warfare against its adversaries. According to the Middle East Media Research Institute, Since January 2015, the Islamic State has conducted 44 cyber attacks against private and government institutions, including North Atlantic Treaty Organisation (NATO) websites. These attacks have ranged from defacement to data theft.25

The Islamic State’s propaganda machinery has undergone a sea change. High-definition videos shot by steady cams have replaced rudimentarily shot videos; grainy videos have been replaced by glossy, high-definition graphics coupled with slick editing; and motion contents have replaced static images – all these delivered by professionally organised media outlets, which have replaced loosely organised publicity groups. All these have happened concomitantly with the growth of social media as a whole as a medium of communication. The Islamic State’s propaganda, which has been amplified by the growth and reach of social media, has had a tremendous impact on Western audiences and on the Islamic communities across the globe. The primary target audiences of Islamic State’s media campaign are the West and Islamic communities in the West. The Islamic State has deftly used the Internet, especially the social media networks, to disseminate information to these target audiences.

The Islamic State’s broadcasting of execution videos of hostages is aimed at creating deterrence among the Western nations from participating in military actions against the Islamic State. It is also aimed to create fear and panic among the larger audience from other communities. By doing so, it has built an effective propaganda system, enhancing its brand among its sympathisers and followers worldwide. Its graphic execution has been found to be extreme even for radical groups like al- Qaeda.

Countermeasures, such as closure of the Islamic State’s social media accounts, have not been successful as they have engineered a multi-tier system which is redundant proof.

Its unique campaign of using visual and graphic depictions in alignment with its ideological texts has been a great attention-grabber. This, in turn, has triggered a flow of foreign fighters, whose numbers have swelled considerably since 2013 and 2014. In the process of waging a robust information management campaign, it has dethroned its rival al- Qaeda as the principal jihadi organisation acting against Western interests.

Countermeasures, such as closure of the Islamic State’s social media accounts, have not been successful as they have engineered a multi-tier system which is redundant proof. With clampdown from Twitter, the Islamic State has moved to other, lesser known and less rigid, social networks, like Diaspora.

The Islamic State at least appears to have found conflation in the words of Ayman Al Zawahiri, the head of al-Qaeda. Zawahiri has stated that the media represents two-thirds of the battle and has emphasised the importance of jihadi media to counter Western media propaganda. Built on the same legacy and knowledge inherited from al-Qaeda, the media operations of the Islamic State are managed and operated by techsavvy, educated members, which is the primary reason for its success. Another fallout of this media campaign is the self-radicalisation of youths in different countries. This has directly enhanced its ability to attract likeminded persons with similar literacy profiles, who in turn become brand ambassadors of the Islamic State. The global community is facing one of its greatest challenges, becoming a victim of its own success, a success celebrated by the integration of communities using technological advancements like the Internet and social media.

5. Sarah V Marsden. ‘Media Metrics: How Arab and Western Media Construct Success and Failure in the “Global War on Terror”.’ Perspectives on Terrorism 7, no. 6, 2013. <http://www.terrorismanalysts.com/pt/index.php/pot/article/view/309>.

9. The Arabic versions of all 14 issues are available at http://jihadology.net/category/inspire-magazine/.

13. Rita Katz. ‘Follow ISIS on Twitter: A Special Report on the Use of Social Media by Jihadists.’ Insite Blog on Terrorism & Extremism, 26 June 2014. <http://news.siteintelgroup.com/blog/index.php/entry/192-follow-isis-on-twitter>.

18. Guardian. ‘The Terrifying Rise of Isis: $2bn in Loot, Online Killings and an Army on the Run.’ 16 June 2014. <http://www.theguardian.com/world/2014/jun/16/terrifying-rise-of-isis-iraq- executions>. Also refer to Sherlock, ‘Inside the Leadership of Islamic State: How the New “Caliphate” Is Run.’ While the Guardian report estimates the numbers to be at 10,000, the Sherlock (The Telegraph) report estimates the membership to be at 25,000, including associated groups quoting an ISIS expert named Hisham al-Hashimi.

19. James R. Clapper. ‘Current and Future Worldwide Threats to the National Security of the United States.’ Office of the Director of Defence Intelligence. 1 February 2014. <http://www.armed- services.senate.gov/hearings/14-02-11-currentand-future-worldwide-threats>.