Constituents of Strategic Communications of the Islamic State?

Recent technological advancements, including the birth and growth of social media, have acted as a watershed event contributing to the success of the Islamic State’s propaganda machinery. Drawing literate members from different parts of the globe with varied backgrounds has also contributed to the success story of the Islamic State. With the advent of social media, traditional barriers to communications, like distance, lack of speed, cost and reach, have been obliterated. The Islamic State has used the speed and reach of social media to augment its well-organised media operations which has not been emulated by any of the non-state actors till date.

The Islamic State’s propaganda ability is radically different and aggressive compared to its predecessors, like al-Qaeda. Buoyed by the advent of social media, the Islamic State has used its propaganda machinery to take the battle into its enemy’s heartlands.

The Islamic State has recognised the significance of engaging its adversaries on all fronts and its propaganda strategy. This runs parallel to its military operations, which is crucial in achieving its strategic objectives. This is a direct inheritance from al-Qaeda, which had recognised the importance of media in its overall grand strategy long before the Islamic State was founded.2 Its emir, Ayman Al Zawahiri (2005), has emphasised:

We are in a battle, and that more than half of this battle is taking place in the battlefield of the media. And that we are in a media battle in a race for the hearts and minds of our Umma.

Presently, the race to win ‘hearts’ and ‘minds’ of Umma (Ummah, or Islamic community) has led to conflicts between al-Qaeda and the Islamic State. For example, Zawahiri had stated in 2005 that scenes of slaughtering hostages, justified by some in al-Qaeda for creating fear in the minds of adversaries, may not be received well by the Islamic community.3

Among the things which the feelings of the Muslim populace who love and support you will never find palatable – also – are the scenes of slaughtering the hostages. You shouldn’t be deceived by the praise of some of the zealous young men and their description of you as the shaykh of the slaughterers, etc.

This runs contrary to the current propaganda blitz of the Islamic State, which releases execution videos of its hostages. Zawahiri, in one of his latest messages (August 2015), has attempted to soothe the rift between al-Qaeda and the Islamic State where he called on the jihadist media to refrain from sowing discords in their ranks, clearly referring to the anti al-Qaeda propaganda of the Islamic State.4 However, both these groups have surprisingly found some conflation in their propaganda campaign. These groups have attempted to take advantage of the much broader narrative prevalent among Western and Arab media covering the global war on terrorism. Marsden excellently captures the conflicts between the mainstream Western and Arab media, stating,5

For the Western media, the conflict was a confrontation with a global ‘phantom enemy’ waged through covert and overt military operations, alongside a public relations effort. For the Arab media, the GWOT (Global War on Terrorism) was an extension of US power and a result of social, political and economic ‘root causes’, implying political and diplomatic responses.

Ideas such as the negative fallouts of the US invasion and establishing a caliphate are the basic premise that have become the narrative of the current propaganda war between al- Qaeda and the Islamic State.

According to Marsden, the construct for the propaganda battle among the media clusters and warring parties like al-Qaeda and the global coalition is more a ‘war of ideas’, which is closely complemented by the battle to win ‘hearts’ and ‘minds’.6 In simple words, the objective of this dimension in the battle was to win public opinion in each other’s favour. Such is the ability of the propaganda mechanism that it was able to engineer opinions among the masses.

While al-Qaeda’s defining moment in its propaganda war came with the US invasion of Afghanistan in 2002, the Islamic State’s campaign is based on aftermath of the Iraqi invasion. Both these groups have strived to capture the ill effects of US actions in every single instance of propaganda they have made till date. Ideas such as the negative fallouts of the US invasion and establishing a caliphate are the basic premise that have become the narrative of the current propaganda war between al- Qaeda and the Islamic State.

Evolutions in the Propaganda Strategy of Terror Groups

In the context of propaganda mechanisms adopted by groups like the Islamic State and terrorists groups in the 1980s and 1990s, the strategy of the Islamic State is radically different, unique in content, form and delivery. Historically, terror groups have based their propaganda strategy to claim responsibility for their attacks by using newspapers to control the flow of information.

With advancement in technology and the birth of the Internet, this information campaign became more organised, with groups like al-Qaeda starting to use visual platforms and tools based on jihadi forums to disseminate information, statements from leaders, combat videos, etc., to the general public. According to Gabriel Weimann, a researcher at Israel’s Haifa University, who tracks proliferation of terrorist websites, the number of terrorist sites shot up from fewer than 12 in 1998 to 7,000 in 2009.7 Al-Qaeda, which had only one website (www. alneda.com) in 1998, is presently believed to have presence on hundreds of chatrooms, online forums and bulletin boards.8 New concepts were used, for example, the crowd-sourcing effort launched in 2005 by the Victorious Army Group to build its website, announcing that winners of the competition would get to fire a rocket at an American base.

As a subset of the jihadi propaganda during this period, al-Qaeda’s Abu Musab Al Zarqawi caught the world’s attention with an improvised campaign of showing videos of real attacks against the US forces, captured using handheld cameras. These videos, which were uploaded on online jihadi forums like Ansar al-Islami (Supporters of Islam), drew potential jihadi recruits from all over the world. Later years witnessed the emergence of US-educated Al-Qaeda in Arabian Peninsula’s (AQAP’s) Anwar Al Awlaki, who with his fluent English inspired hundreds of educated potential jihadis based in Europe, the UK and the US. AQAP, headed by Awlaki, came out with a magazine called Inspire in June 2010. According to Jihadology (a website specialising in jihadi media), there are 14 issues till date.9 The last one was in September 2015, instigating lone-wolf attacks in Western countries. Apart from media controlled by groups, other independent media players started cropping up during 2009–2010, which existed alongside the media houses controlled by the groups.10

These actions of al-Qaeda and its associates since 2005 later became defining moments in the jihadi propaganda history, setting the stage for what was to follow next, orchestrated by the Islamic State. 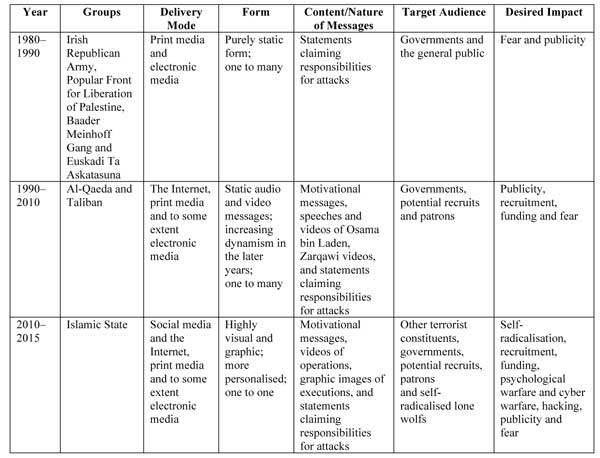 Table 1 – Evolutions in the Propaganda Strategy

According to the Independent Strategy and Intelligence Study Group, al-Hayat Media Center has full-time employees who develop and test messages on sample groups of Westerners among its ranks.

The term ‘Al-furqan’ means ‘standard’ or ‘criterion’ for judging the difference between truths and lies. This is one of the Islamic State’s oldest outlets and is in charge of producing propaganda. This was founded in 2006 by the Islamic State of Iraq, which is the principal organisation to propagate messages from the Islamic State’s leadership. According to Middle East Media Research Institute (MEMRI), Al Furqan has been frequently airing videos of the Islamic State of Iraq’s bomb attacks on Iraqi and US forces. A 2007 raid on an Al Furqan media centre in Iraq revealed that the media hub contained an enormous amount of media storage equipment, such as 65 hard drives, containing terabytes of electronic files; 18 thumb drives; over 500 CDs; and 12 standalone computers.11

The Islamic State launched this in January 2014; it specialises in airing jihadi songs and audios.

This was launched in May 2014 to primarily target potential Western recruits. It uses social media like Twitter and Facebook to disseminate information, messages, speeches and videos. Ostensibly rich in production values and in many languages, it is aimed at Western audiences and non- Arabic speakers.

According to the Independent Strategy and Intelligence Study Group, al-Hayat Media Center has full-time employees who develop and test messages on sample groups of Westerners among its ranks. These messages are then circulated to the target audiences of newly converted Westerners.12

All of the above entities use social media platforms like Twitter. According to SITE intelligence group, on 13 June 2014, Twitter suspended two accounts that belonged to the Al I’tisam Media Foundation and had more than 50,000 followers.13 The Twitter account of Ajnad Foundation for Media Production has 36,000 followers. According to SITE intelligence group, Al Furqan Foundation for Media Production, which posts videos of executions, speeches, etc., has 19,000 followers. Al- Hayat Media Center maintains at least half a dozen Twitter accounts, in French, Danish, Russian, etc., with as many as 10,000 followers.

Notwithstanding the above suspensions, the Islamic State still continues to access Twitter because of the three-tier system they have adopted. The first tier consists of official accounts of the Islamic State, like Al Hayat and Al Furqan. The next level consists of jihadi fighters and core members, mostly foreigners based in Syria and Iraq. The last levels are the followers and sympathisers who follow the accounts of these foreign fighters and members. The flow of information cascades from official accounts to accounts of foreign fighters and members, which in turn is disseminated to followers and sympathisers outside the conflict zones. For details on the most popular and active Twitter handles of the Islamic State, see Table 2. 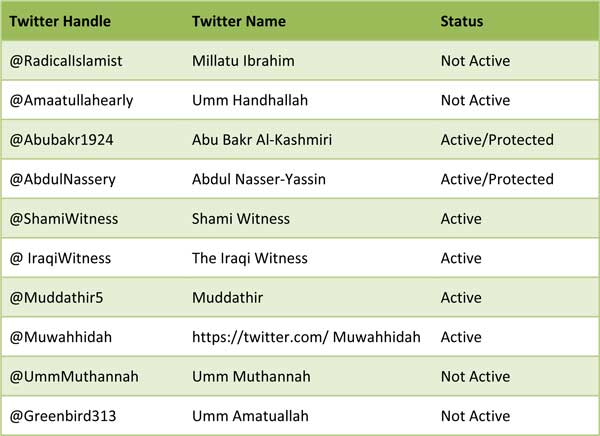 According to a 2014 study on the Twitter accounts of Islamic State members in Iraq and Syria, the contents of these postings were mostly religious instructions and battlefield reporting.15 In terms of content, pictorial images were the most uploaded, which appealed to the potential jihadis more and were in alignment with the ideological texts.