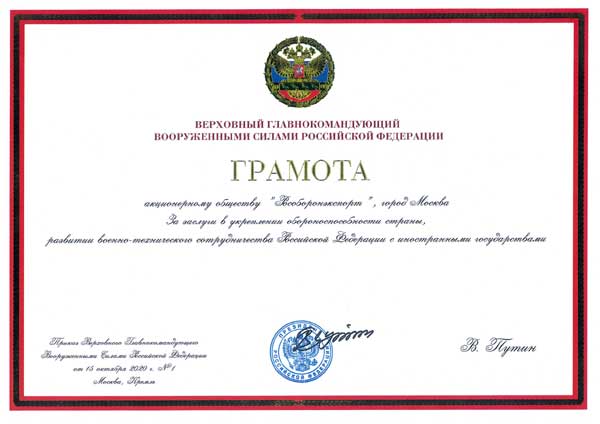 In line with Order No. 1 of the Supreme Commander-in-Chief of the Armed Forces of the Russian Federation Vladimir Putin dated October 15, 2020, Rosoboronexport JSC (part of Rostec State Corporation) has been awarded the Certificate of Honor “For merit in strengthening the country’s defense capacity and developing military-technical cooperation between the Russian Federation and foreign countries.”

“Over 20 years of its activities in an extremely difficult segment of the world market, Rosoboronexport has increased its key foreign trade indicators five times and made Russia the second largest exporter of arms and military equipment. A steady inflow of orders through Rosoboronexport contributed to the timely establishment of high-tech production of competitive products in the country. Thanks to government support, primarily the support of the President, we are successfully moving forward, continuing to develop new areas of cooperation with partners. This high award is recognition of the highest competencies of the whole team of the company, its achievements and evidence of high confidence of the country’s leadership,” said Alexander Mikheev, Director General of Rosoboronexport.

November 4, 2020 marks the 20th anniversary of Rosoboronexport (part of Rostec). The company was established by decree of the President of the Russian Federation as part of the reform of the military-technical cooperation system.

Today, Rosoboronexport is a leader in the international arms market. Over 20 years of its operation, the company has delivered over $180 billion worth of Russian military, dual-use and civilian products to 122 countries. The value of annual export deliveries of Russian enterprises’ products is about $13 billion and the order book exceeds $50 billion.

Foreign customers appreciate the opportunity to cooperate with Russia’s defense industry through Rosoboronexport, a unique one-stop shop offering a full package of services for the export of high-tech military and civilian products and technology transfer.