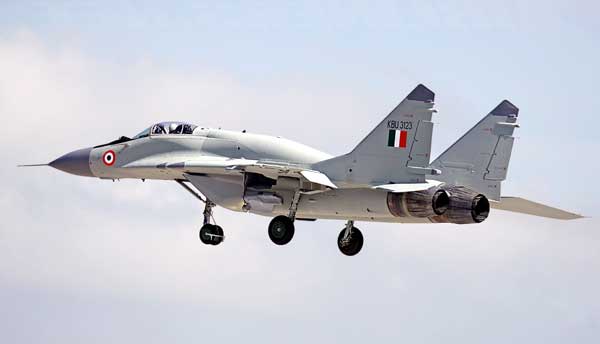 Not many would know it was NATO that gave the codename ‘Fulcrum’ to the Classic MiG-29 when the MiG-29 became operational in 1982; a name liked and adopted by the Soviets.

IAF received around 70 early model MiG-29s from Russia between 1986 and 1990, of which around 62 remain in service, the first procurements over 30 years back costing USD16 million per unit.

By the 1990s, Western pilots were flying MiG-29s with falloff the Berlin Wall and German Air Force incorporating the MiG-29s of East Germany. Subsequently, America also bought 21 of these fighter aircraft from Moldova. The Indian Air Force (IAF) received around 70 early model MiG-29s from Russia between 1986 and 1990, of which around 62 remain in service, the first procurements over 30 years back costing USD16 million per unit.

A foreign publication puts India’s holding of MiG-29 Fulcrums at over 110, including 45 MiG-29Ks in the Indian Navy. Since the early 2010s, Hindustan Aeronautics Limited (HAL), in cooperation with MiG in Russia, has upgraded about half of IAF’s holdings 69 MiG-29s, whereas upgrading of all 69 were supposed to be completed by year 2013 to UPG standard. The UPG variant is similar to the Russian modernized MiG-29 SMT equipped with the Zhuk-ME electronically scanned slotted planar array radar, improved engine and expanded capability to conduct air-to-ground missions.

Recent media reports indicate that Russia has offered the IAF 21 MiG-29 Fulcrum fighter aircraft airframes that have been ‘stored’ for decades but not used. Wings of these MiG-29s were also stored separately.

These 21 MiG-29s airframes were built in the 1980s by Russian firm RAC MiG, for the Russian Air Force, which could not muster up the money to pay for them and these were not even used by the Russian Air Forces after dissolution of the Soviet Union in December 1991. These airframes were never flown but reportedly were subjected to periodic maintenance to keep them in healthy conditions, for use in future when required to be made operational.

The report goes on to say that Russia already had stopped production of MiG-29 Fulcrum airframe in 2012 and the last customer was Myanmar Series production of MiG-29 Fulcrum that began in 1982, and that to date about 1700 of these fighters were produced, which in addition to the Russian Air Force, are in service with 27 countries, including Algeria, Azerbaijan, Yemen, Kazakhstan, and North Korea.

The MiG-29 undoubtedly is highly maneuverable like the Su-30 fighters held by India, which is very difficult with regular aerodynamic controls, because of its excellent handling characteristics…

The 21 MiG-29 airframes offered to IAF by Russia are skeletons, which will require new avionics, engines, and other parts, to make them fly for the first time. A team of IAF officials recently visited Russia to inspect these MiG-29 Fulcrum airframes and Wings, found them in good condition and have recommended to the Ministry of Defence (MoD) and IAF to go ahead and purchase these airframe which will be upgraded with latest SMT Upgrade package eventually delivered at roughly around USD25 million per fighter.

Simultaneously, Russia has confirmed these 21 MiG-29s now offered to IAF will be upgraded to the same standard as IAF’s other three MiG-29UPG squadrons. That would add another USD15 million or so to each fighter’s price – overall cost becoming around USD 40 million per fighter. At the moment it is unclear whether this upgrade to SMT-cum-UPG version will be done by MiG in Russia or in conjunction HAL in India, but the latter is more likely considering Russia stopped production of these airframes years back.

The MiG-29 undoubtedly is highly maneuverable like the Su-30 fighters held by India, which is very difficult with regular aerodynamic controls, because of its excellent handling characteristics following a stall, and it can also attain very high angles of attack. However, the operational record of the MiG- 29 has not been as exciting albeit pilot training and experience may have contributed towards this, as seen by following:

The notable issue also is that HAL, like all entities of DRDO, OFB and DPSUs have the track record of being years, even decades behind the timelines they promise.

As per records, MiG-29 have also been used for ground attack missions in former Yugoslavia, Moldova, South Sudan, Sudan and Ukraine. In May 2012, the Indian Parliament was informed by the then Defence Minister that over the past 40 years, India had lost more than half of its MiG combat fleet of 872 aircraft, saying, “482 MiG aircraft accidents took place till April 19, 2012”.

With reference to the current Russian offer of 21 MiG-29 airframes, a number of questions arise, including:

•  Did MiG manufacture 21 airframes without firm order from the Soviet Union;

•  Even after the breakup of Soviet Union, Russian Air Force has been flying the MiG-29 Fulcrum though reportedly of the “Myanmar Series” production – what is the difference between the two and why were these airframes not used;

•  Why has Russia made this offer at this stage when the depleting strength of the IAF fighters has been known to Russia all along, and;

•  Whether this offer is on India’s behest? A cross-section of the uniformed fraternity feels latter could indeed be the case in order to ease pressure on the government due to the Rafale controversy, CAG report notwithstanding, and to deflect criticism of senior IAF officers for making political statements.

With the enlarging China-Pakistan threat, the Finance Minister needs to release more funds for defence of the country rather than playing into enemy hands…

Media is projecting the Russian offer “about” USD25 million, cheaper than the Tejas. The per unit price of the modified Tejas that IAF seeks has not been mentioned, but if the Russian offer is USD25 million cheaper than the Tejas, then latter would at least be priced at USD65 million or more? The question still remains in what time-frame will these 21 x Mig-29 Fulcrums be transformed into operational fighter aircraft, and what will be the final cost, given that HAL has been able to upgrade only half of the IAFs MiG-29 holdings while they were required to upgrade all 69 six years back – by 2013.

In the instant case, the skeleton MiG-29 Fulcrums offered require very major upgrade, in addition to even changing the internal wiring in the skeletons. The notable issue also is that HAL, like all entities of DRDO, OFB and DPSUs have the track record of being years, even decades behind the timelines they promise.

Ultimately, the decision rests with the experts of the IAF and pundits of the MoD. There is no doubt that the IAF is woefully short of fighter aircraft and must be prepared to fight on two-fronts. However, cost of these 21 x MiG-29 Fulcrum of USD 840 @ USD 40 million per fighter should not be the only criteria when we are paying USD 9.5 billion for 36 Rafale fighters @ USD263.88 million per unit cost. There is a definite case for the IAF to look around and see if there is a better choice available even if the conclusion finally is the present Russian offer.

The Rafale is a top line fighter but the deal should not be viewed in context of whether the Congress or the BJP were/are getting it cheaper, or what procedures were followed. Figures available publicly indicate that while India is procuring Rafale fighters at per unit cost of USD263.88 million (USD9.5 billion for 36 fighters), the US Air Force and Japan are procuring 141 and 100 fully equipped F-35 for USD 11.5 billion @USD81.55 million apiece and USD 8.8 billion dollars @USD88 million per fighter respectively.

With the enlarging China-Pakistan threat, the Finance Minister needs to release more funds for defence of the country rather than playing into enemy hands by making successive defence budgetry allocations that are lower than 1962 in terms of percentage of GDP. Where there were no compunctions in paying USD 11.5 billion for 36 Rafale, the least that needs to be done is to get state-of-the-art fighters to make up IAF shortages, rather than the proposed arrangement which obviously would have long gestation period despite usual assurances.