Combat Potential of the IAF for a Two-Front War 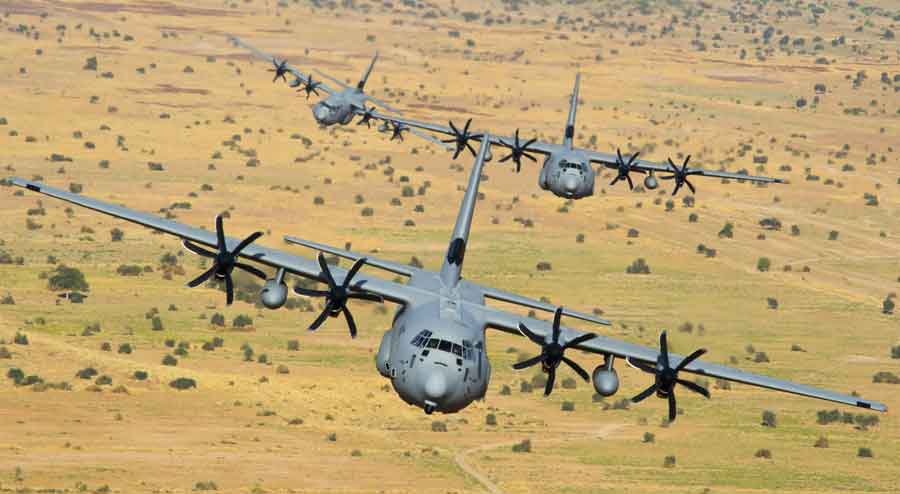 These operations are conducted to reposition troops from one valley to another to counter any evolving threat and to surprise or offensively exploit the weakness of the adversary.” C-130J and AN-32 tactical transport aircraft and Mi-17V5/ ALH helicopters were used for the missions. A notable use of the C-130J was the landing at Mechuka, an ALG in Aruncahal Pradesh at an elevation of over 1800 metre with artillery guns. During the exercise, a battalion level airdrop exercise was undertaken; 560 paratroopers along with their combat vehicles and cargo platforms were dropped by six C-130Js and seven An-32s.

The An-32, of which the IAF was the launch customer, has been the workhorse of the IAF in transport roles. During Exercise Gagan Shakti, a large-scale mass casualty air evacuation drill involved two An-32s taking off from Air Force Station Chabua and landing at Netaji Subhash Chandra Bose International (NSCBI) Airport in Kolkata with lying casualties. A total of 125 were procured and around 100 are still in service. Their versatility for military roles is commendable and contribution to combat capability comprehensive.

The IAF purchased six C-130J Super Hercules in early 2008 and exercised its option to buy six more in 2013. It lost one in an accident in 2014 but ordered a replacement in 2016. The C-130J is the latest model of the C-130 turboprop tactical airlift aircraft and the IAF’s total of 12 aircraft is what will provide special mission capability with one squadron based in Panagarh and the other in Hindon. The two-front connotation is evident from the peacetime location of the two squadrons.

The IAF’s C-17 Globemaster III is its real strategic airlift platform. It can take-off from a runway just 7,600 ft long, carry a payload of 72.5 tonne, fly 2,400 nautical miles, carry out flight refuelling and land on a 3,000-ft unpaved or paved runway by day or night. It is thus capable of landing at the ALGs in the North East and has demonstrated this in the past. It has an astonishing capability of being able to go backwards on a two-degree slope, a big asset in restricted area operations in the ALGs. In a simulated exercise during Gagan Shakti, 88 “casualties” were airlifted from Leh to Chandigarh. A C-17 was converted for this role by fixing support structures for stretchers in the main cabin. The IAF already has ten and an eleventh one will join it in August 2019, the last one to do so.

In recent years, India realised that building a respectable combat potential would include airlift capabilities in addition to front line fighter aircraft. Undoubtedly, these aircraft, albeit in small numbers, represent an enhanced capability to move large number of troops and equipment from one ‘front’ to another or even within the same one as in the case of IVTT. Do we need more of these two types? Possibly the answer from the IAF would be a firm and loud ‘Yes’, but, given the overall picture, it would seem prudent to wait until the more critical and perilous shortfall of fighter aircraft is met.

The Mi-17V5 helicopter deserves a special mention as far as the heli-lift capability of the IAF is concerned. India has already received 151 of these starting in 2008 and a deal for 48 more is expected to be signed this year although the Defence Acquisition Council (DAC) had cleared the deal in September 2015. Again, these numbers are not totally satisfying for a country with more than 3,000,000 sq km of territorial expanse and land borders of 15,106 km with its seven land neighbours including China and Pakistan but will have to make do until the Defence Budget grows more munificent.

Flight Refuelling Aircraft (FRA) was an important strand of the wide reach Exercise Gagan Shakti endeavoured to portray. During the exercise, Su-30s took off from Kalaikunda (Eastern coast) and engaged multiple targets over the area of Lakshadweep (2,500 km away) before returning to a base in South India. The aircraft were refuelled on its way to Lakshadweep as well as during the return flight after the mission.

India’s current flight refuelling capability is six Il-78 MKIs procured from Uzbekistan in 2002. Each can replenish three aircraft at a time and up to eight Su-30MKIs in one sortie. Jaguars and Mirage 2000s are the other IAF aircraft that can carry out flight refuelling while the Netra Airborne Early Warning & Control (AEW&C) aircraft is the latest to demonstrate this capability. However, the serviceability is less than 50 per cent and efforts are on to procure six more. Unfortunately, two tenders floated in the past have come to naught. In January this year, a new RFI was sent out and one hopes that it fructifies soon as FRA would be critical to shifting from one front to another and for maritime strikes and operations related to far flung territories such as the Andaman & Nicobar Islands and Lakshadweep.

The IAF has reportedly directed Defence Research & Development Organisation (DRDO) that the Airborne Warning and Control System (AWACS) aircraft being developed around an A-330 platform since 2015 have the additional role of FRA. Debatably, such an aircraft will lead to sub-optimal attainment of either role while meeting the urgently required numbers of both AWACS and FRA. However, if and when the DRDO manages to produce an AWACS/FRA hybrid aircraft, its merits and demerits could then be analysed vis-a-vis two differentiated platforms for the two roles. Six AWACS, possibly with dual role, are expected to be produced by DRDO to augment the current IAF holding of three Phalcon AWACS Il-76 aircraft with Israeli electronics. Given DRDO’s track record, it may be prudent to start looking around for six new AWACS aircraft although earlier plans for two more Phalcons was grounded as both the Russians and the Israelis almost doubled the price of their individual shares.

India is now the world’s fifth highest defence spender, but statistics can be disingenuously deceptive. In terms of percentage of GDP, it is the lowest since India was last subjected to an ignominious military drubbing by China in 1962, and now stands at just 1.58 per cent of GDP. The allocation for 2018-2019 was Rs 1.21 lakh crore less than that demanded by the armed forces. As pointed out by some analysts, it is not even adequate for committed liabilities, leave alone modernisation and new acquisitions. Indeed, the establishment approach towards military acquisitions appears to suggest that it does not consider war a possibility and is instead misplacing confidence in foreign policy initiatives to keep war at bay.

In contrast, Pakistan proposed a 20 per cent hike in its military spending this year while China declared a defence budget increase of 8.15 per cent in March this year. The figures need to be seen in the context of the defence forces telling a Parliamentary Committee on Defence in March this year that the current budget barely accounts for inflation and tax payments. In the case of the IAF, the capital budget allocation is inadequate even to meet the commitments already existing and do not cater for any new acquisitions. This fact impinges on all the modernisation plans of the IAF.

The most disquieting apprehension in the context of building IAF’s combat potential is about combat aircraft acquisition. The obvious advantages of twin-engine over single-engine (higher safety, greater operational ceiling, higher performance and payloads) may have to be disregarded in favour of the lower cost of a single-engine platform. Inarguably, life cycle costs will be the prominent factor in the selection process once the operational flight tests narrow down the field to a short list. However, the perceived political value of ‘Make in India’ in an election year, would also play a role. The situation is ripe for deriving the maximum technology transfer by playing one contender against the others. However, the inescapable imperative is that the 110-aircraft RFI be brought to a logical conclusion speedily and the selected aircraft inducted into the rapidly dwindling IAF at the earliest.

Only the passage of time will reveal whether India will actually face a two-front war. The only certainty is that the IAF will do its best and live up to its motto of touching the sky with glory. One hopes that the Cassandras who hint at another ignominious outcome for India if the present trend of declining combat potential continues, are proved wrong. The only way to prevent that would be a change in the government’s perception on IAF modernisation.