Combat Fleet of the IAF: Present and Future 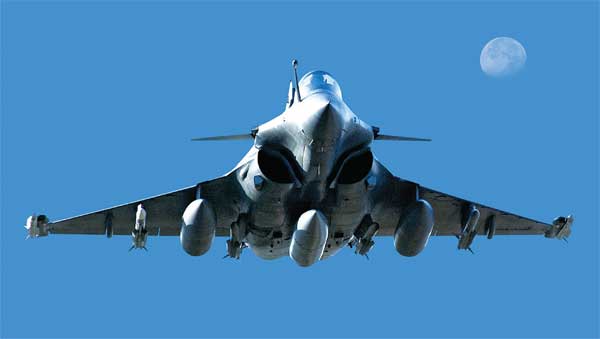 Combat aircraft constitute the cutting edge of any air force and so it is with the IAF as well. Modernisation and upgradation of combat platforms are ongoing processes that will help the IAF maintain the operational edge at all times. By the end of the 15th Five Year Plan, it is expected that the IAF inventory would consist largely of fourth and fifth generation platforms. Notwithstanding the depleting numbers that are being witnessed today, the continuing induction of new combat platforms such as the SU 30 MKI as well as the plans of acquiring the Rafale and the Tejas, the IAF would have the capability of long-range precision attack and of delivering conventional and nuclear weapons. This would give the IAF not just the necessary deterrence capability, but also a reliable second-strike capability.

Modernisation, as always, is a statement of a nation’s economic strength…

During any interaction with the layman about the Indian Air Force (IAF), the discussion normally veers to the topic of ‘fighter aircraft’. The general public holds a greater fascination for the various types of aircraft in the combat fleet (read fighter fleet) of the IAF, as can be witnessed at any public gathering that has an air display or show, which has a fly-past at its culmination. Be it the Republic Day celebrations or the Air Force Day parade or any other such occasion, it is always the display by fighter aircraft that gets the maximum applause. The fascination is not restricted to just the man on the streets but even movies and television serials portray the combat fleet of the IAF as the ‘guardians of the Indian skies’. People seldom realise that the fighter aircraft of the IAF operate in close coordination with other weapon platforms and systems which, as a team, form a lethal combination but are rarely in the public eye.

Many leaders have stated in national and international fora that India has no territorial ambitions but would defend every inch of its territory and national security interests. During the annual Air Chief Marshal PC Lal Memorial Lecture in 2006, Shri Pranab Mukherjee, as the then Raksha Mantri, mentioned, “India is not looking to imposing its ideology on its neighbours yet it has to be capable of safeguarding its extended frontiers from the Gulf of Aden to the Strait of Malacca.”

The former Prime Minister of India, Dr Manmohan Singh too had echoed similar thoughts in his address to the top brass of the Indian military during the Annual Armed Forces Commanders’ Conference in 2009. The nation has chosen to ensure the security of the area within the extended boundaries as it is through this region that all of the nation’s trade, commerce and energy requirements flow into the country. Sustained and a rapid economic growth since the beginning of the new century has placed the nation amongst the leading countries of the world.

Notwithstanding the temporary setback of the last decade, the new Modi-led National Democratic Alliance Government has once again managed to draw international focus onto India. The country’s economic rise, coupled with the continuously evolving geopolitical scenario, has placed additional responsibilities on the security forces of the nation, especially so on the IAF. The question then arises whether or not, the IAF has the wherewithal and capabilities in respect of the combat fleet, now and for the future, to match its constantly increasing role and responsibilities?

The modernisation programme for the IAF has been an ongoing process, a continuous evolution and it all began with the IAF becoming the first Air Force in South and South East Asia to be equipped with combat jets. In 1948, it acquired from the United Kingdom (UK) the Vampire jet fighter aircraft. Subsequently, the modernisation process moved ahead in giant leaps or crawled, depending upon various factors ranging mainly from bureaucratic meddling to political indifference to economic slowdown and paucity of funds.

Modernisation, as always, is a statement of a nation’s economic strength. It is an indicator of the country’s show of power in its region of influence and in the comity of nations. Through the decades after 1947, the IAF acquired the French Ouragon, renamed by the IAF as the ‘Toofani’, the Mystere once again from France, the Hunter, Canberra and the Gnat from the UK in the 1950s. The MiG 21 family of air defence aircraft and the Su-7 ground attack aircraft came from the then Soviet Union with induction beginning in the 1960s.

Following these acquisitions, other combat platforms were procured through the 1970s to 1980s, right through to the present times. These included the MiG 23 MF variable geometry air defence fighter aircraft, the MiG 23 BN variable geometry ground attack aircraft, the MiG 27 ground attack aircraft manufactured under license by Hindustan Aeronautics Limited (HAL) and the MiG 25 Foxbat high altitude strategic reconnaissance platform – all from the Soviet Union on attractive financial terms. From British Aerospace of the UK, the IAF received the Anglo-French Jaguar deep penetration strike aircraft and the Mirage 2000 delta wing multi-role combat a highly successful product from Dassault Aviation of France.

The acquisition programmes of the IAF today aimed at modernisation are a follow-on of what began with the Vampire jets, to initially attain, then sustain and when required, to regain its operational capability in response to the threats from our not-so-friendly neighbours and to meet regional commitments arising out of a continually evolving geopolitical situation.

Present Status of the IAF

In the 1960s, after two successive wars, one with China in 1962 and the other with Pakistan in 1965, several studies were conducted to suggest ways and means to strengthen the Armed Forces. One significant recommendation that emerged from the studies was that the IAF should be equipped with a total of 64 squadrons of which squadrons holding combat aircraft should total to 45. This strength was calculated to effectively meet the combined threat posed by the two hostile neighbours China and Pakistan. The closest to this figure of 64 squadrons that the IAF has so far been is to raise and maintain 39½ squadrons, a figure achieved during the 1970s and 1980s, when the maximum acquisitions took place.

Today, the strength of combat squadrons stands at 34 and this is likely to reduce further to 30 squadrons in the next three years or so with the older types such as the MiG 21 Bison and MiG 27 due to be retired from service having been overtaken by obsolescence reached the end of their total technical life. In the meantime, the Government has accorded approval for increase in the strength of the combat fleet to 42 squadrons by the end of the 14th Five-Year Plan i.e. in the period 2022 to 2027.

To arrest the rapid depletion in force levels that would undoubtedly result in the erosion of the operational potential, the IAF has embarked on the mid-life upgrade and modernisation of some the other fleets. These upgrades would help the fleets to render avant-garde service for another two to three decades, if not more.

The upgrade of the MiG 29 fleet was initiated in 2007 and is likely to be completed in 2016. The task, of upgrading the 66 aircraft on the inventory, has been contracted to RAC MIG of Russia at a cost of $964 million (Rs 6,000 crore). Under the upgrade programme, the aircraft will have an enhanced fuel capacity, new airborne radar and other modern avionics as well as an upgraded power plant.

Notwithstanding the optimism from all quarters, there are impediments in the speedy finalisation of the MMRCA contract…

The contract for the modernisation of the Mirage 2000 fleet of the 50-odd aircraft remaining on the inventory of the IAF was finalised in 2011 and the task is to be completed by mid-2021. As per the contract, Hindustan Aeronautics Limited (HAL) will upgrade 46 of the aircraft after the first four have been upgraded in France. This would be under the clause of Transfer of Technology. The end-product will bring the Indian fleet to Mirage 2000-5 Mk 2 standard which includes a new radar system, weapon suite, missiles, Electronic Warfare (EW) systems and much more. The airframe is being stripped to the bare skeleton and rewired for the new avionics, mission computers, glass cockpit, helmet-mounted display, EW suites and other new fitments. These modifications would also enhance the total technical life of the aircraft. Along with the upgrade of the Mirage fleet, a separate contract with MBDA Company has also been signed for the supply of 450 MICA air defence missiles for the upgraded fleet.

The Jaguar twin-engine deep penetration strike aircraft has been in service with the IAF since 1979. The aircraft has a proven record of reliability and is currently operated in five squadrons of the IAF. After the acquisition of a few Jaguar aircraft initially from the United Kingdom (UK) in fly-away condition, the remaining platforms were manufactured under licence by HAL. The Jaguar fleet is now being upgraded by HAL in a $585 million (Rs 3,600 crore) contract and is likely to be completed by 2017.

The upgraded aircraft will have a multi-mode radar, glass cockpit, DARIN-III navigation and attack system avionics, Hands-on-Throttle-and-Stick (HOTAS) controls, an Integrated Defensive Aids Suite (IDAS) and more powerful engines from Honeywell. Even as the Jaguar fleet is being upgraded, the IAF is also keen for a replacement for the Jaguar fleet as it has already served the IAF for three and a half decades and will, in the next decade and a half, reach the end of its total technical life.

One thought on “Combat Fleet of the IAF: Present and Future”