India imports about 70 percent of its energy needs, oil and gas, from the Gulf. It is expected that this quantum will increase to nearly 85 percent in the next ten to twelve to fifteen years; much of it coming into ports on the Gujarat and Maharashtra coasts. The numbers of tankers bringing this energy is slated to go up from about 4000 annually to over 7500 in 2020. At the same time, the sea area under offshore exploitation is expected to double, from 50,000 square kilometers today to 100,000 square kilometers. Maritime security is as much about ensuring the safety of these assets, ships and oil platforms, as about preventing intruders penetrating the coastal waters.

The hundreds of fishing villages spread around the coast should be treated as an asset and not a liability. They should be inducted as the Governments “˜eyes and ears.

In fact, the two are co-terminus and one supplements the other. Additionally, while India shares land boundaries with its South Asian neighbours, it also shares maritime space with Myanmar, Thailand, Indonesia and Malaysia. This proximity has its own complications in terms of poaching and illegal movement of people. Smuggling of narcotics is particularly worrisome as it results in illegal money which is then used for contraband arms and terrorism. It is well known that arms supplies for the LTTE movement in Sri Lanka have been funneled through this route across the Bay of Bengal and some vessels involved in that trade have even be apprehended and neutralized. Finally, the entire area is infested with terrorism, from the Al Qaeda group in the west to the Abu Sayyaf group operating in the Philippines in the east; in between lie the Taliban in Afghanistan, the Jaish and Lashkar groups in Pakistan, the HUJI in Bangladesh and the Jemaah Islamia in Indonesia. While these groups have largely focused on land based activities, their ability to operate at sea should not be ignored; the LTTE has given ample demonstration of what it can do over the last several years.

The attack on the American destroyer USS Cole in Aden a few years ago by Al Qaeda followed by that on the French tanker MV Limberg in the Gulf of Aden are also examples. This group has also attacked offshore platforms at Basra. The Abu Sayyaf has sunk super ferries killing hundreds of innocent people. So, the threat is real and more such acts should be expected, not less. Given its history, demographics and pluralistic society, India is especially vulnerable to targeting by such non-state actors. Finally, nearer home, as already elaborated earlier, India’s coast line is very porous. Clearly, it is necessary to take issues of maritime security far more seriously than has been done so far. 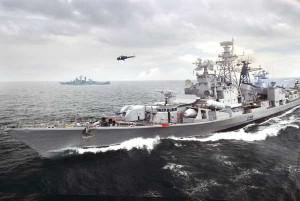 Given the restricted waters through which heavily laden cargo vessels must move into and out of the Indian Ocean, it is not surprising that piracy has been rampant in these waters. In recent years, the pirates have acquired more lethal weapons like AK 47 rifles, rocket propelled grenades and hand held satellite communication phones. Obviously, adequate capabilities are needed to cope with these threats. It must also be appreciated that the maritime sector, more than all others, is transnational. Ships owned in one country are registered in another and crewed by people from several more. They are hijacked in one area, to be taken to another, and then used for illegal activities elsewhere. So, capabilities alone will not help. Close co-operation with maritime forces of other countries is a vital necessity.

In the Indian Ocean, as the preeminent regional force at sea, India must play a proactive role to promote such engagement, both with littoral countries, many of whom do not have capabilities of their own, and with those of others who have similar interests and concerns. In recent years, Indian forces have helped Japan by apprehending a Japanese vessel hijacked in Indonesian waters and being taken to the Gulf. Ships of the Indian Navy have also provided anti-piracy cover to high value US merchant ships traversing the Malacca Straits. Something equally cooperative is necessary in the Gulf of Aden. There is need to expand upon such interfaces as ‘stand alone’ capabilities can never be enough to cope with these challenges. Joint exercises, patrols, and regular interaction are key ingredients of engagement at sea; they promote mutual confidence and trust without which meaningful cooperation and sharing of intelligence is not possible.

Finally, there are nearly two dozen agencies in the country which are connected with sea based activities in one way or another. Apart from the two principal maritime forces, the Navy and the Coast Guard, the BSF has a Marine component. Coastal states have their own Marine Police units, even if very inadequate, and the Custom has a preventive Marine Wing. All major ports have different kinds of vessels, the Offshore and Natural Gas Commission (ONGC) has its own ships involved in providing support to offshore platforms, the Department of Oceanography has ships carrying out research. There are also others, e.g. the Departments of Lighthouses and Fisheries.