As the leading regional power, India has important responsibilities in maritime affairs of this part of the world. So far, it has restricted itself within the narrow confines of its own territorial concerns on land. This mindset must now change.

Transponders, being electronic, can also be compromised but are yet another link of the security chain. Similarly, no unlicensed movements of ships must be permitted within a certain distance of offshore platforms and there must be ‘zero tolerance’ to any violations. There must also be visible patrolling by marine police craft in ports and harbours. Everything that adds to fear of being caught is a deterrent and too much of that is not enough.

The hundreds of fishing villages spread around the coast should be treated as an asset and not a liability. They should be inducted as the Government’s ‘eyes and ears’. Small craft approaching our shores can not just come in anywhere and can also not intermingle very easily. The reason why fishing communities are located where they are is because the shallow waters are more navigable there. The same constraints will apply to intruders. Road transportation, something that intruders will need, is also more easily available from these villages than from other, uninhabited, places. Using these villages as a line of defence with police posts in every one of them is essential. Had one been there at Machchimaar Nagar on the night of 26th November, the intruders might have not been able to get as far as they did.

Finally, it is essential that all elements charged with coastal security, viz the Navy, the Coast Guard, the Marine Police, the BSF and Customs Marine Wings operate through unified Operations Centers. Such entities are essential in Mumbai, Kochi, Chennai and Visakhapatnam and in other ports where forces of more than one agency are based. Since terrorist actions do not take place every day, boredom and creeping casualness will, inevitably, compromise the best laid out defences but frequent and ‘no warning’ exercises will minimize the degradation.

The contours of the new Coastal Command, reportedly under consideration of Government, are not known but if they absorb the issues identified above, it will be a step in the right direction. Of course, all these measures will still fail if the people put in charge to lead and to give decisions shirk from doing so or if one of our own is compromised as is suspected to have happened to the Kuber. But that is no excuse for not having a system in place. In doing so, it is easy to go overboard; care must be exercised in prioritizing the needs and in putting together capabilities that will actually work. For example, the Maharashtra-Gujarat stretch is easily the most vulnerable and deserves immediate attention. Also, putting large numbers of radar stations all along the coast will not be as cost effective as putting some more boats on patrol; nothing deters a criminal as much as the presence of a policeman.

Issues of coastal security are not independent of the larger mosaic of maritime security. The sea is not easily partitioned into specific zones and activities in any one area can, and do, transform into others. It is, therefore, necessary to take a more holistic view of security at sea. At one level, these concerns are strategic and geopolitical. They stem from our own position as the major regional power in the Indian Ocean and the presence and activities of others. While threat of war between nation-states has diminished, it has not disappeared, and India needs to maintain maritime capabilities which are sufficiently deterrent to potential adversaries.

There is urgent need for a Maritime Commission or Agency at the apex level working to oversee all aspects connected with security issues at sea, coastal and otherwise. Such a system is functional in France and in Japan

Pakistan continues to remain an uncertain element and military preparedness must always form an important ingredient of our interface with that country. With China, the boundary dispute remains unresolved and despite significant improvement in relations between the two countries, its naval modernization and efforts to acquire an Indian Ocean profile must be factored into our own plans. So, adequate and credible deterrent capabilities at sea are important.

At another level, there are increasingly serious problems posed by non state actors; that category includes those involved in piracy as well as in terrorism at sea. People involved in the first can easily switch over to the second. About 40 percent of global seaborne commerce moves across the waters of the Indian Ocean; one fifth of this comprises oil and gas. The USA, China, France and Japan are major importers of energy from the Gulf. The east-west shipping route cutting right across the north Indian Ocean is one of the most important trade passages of the world and thousands of merchant ships move on it all the time. Yet, there are serious physical constraints in this movement. All exits and entries to and from the Indian Ocean pass through restricted waters where shipping can be interdicted even by quite poorly equipped criminals.

The Gulf of Hormuz, through which must pass all tanker traffic from that region, the Gulf of Aden heading towards the Suez Canal, the Mozambique Channel needing to be traversed enroute to the Cape and the Malacca/Sunda/Lombok Straits connecting the Indian Ocean with the South China Sea, all fall in this category. The waters off Somalia are another zone of opportunity for miscreants, otherwise known as pirates. Dozens of ships, including tankers carrying potentially dangerous chemicals, have been hijacked in this region in recent months, all for money. 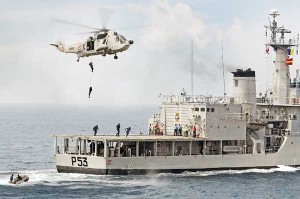 The first and positive blow against the criminals was struck by the Indian Navy when the frigate, INS Tabar, first warded off some threatening moves and later actually sank a mother vessel of the pirates. In another instance the destroyer, INS Mysore, actually apprehended some pirates. India has a serious interest in the safe movement of trade at sea as almost all of it is carried through these waters. In monetary terms, this quantum will touch $ 500 billion in 2008-09 and even with the economic downturn, should cross $ 1 trillion by 2013 and $ 2 trillion by 2020. Overseas trade, which already measures at about 42 percent of GDP, will reach 60 percent of GDP by 2015. So, its safe movement has a key role in the nation’s economic growth. This safety begins in our ports and moves across coastal waters into the open seas.