Climate Change in the Himalayas: A Ticking Time-Bomb? 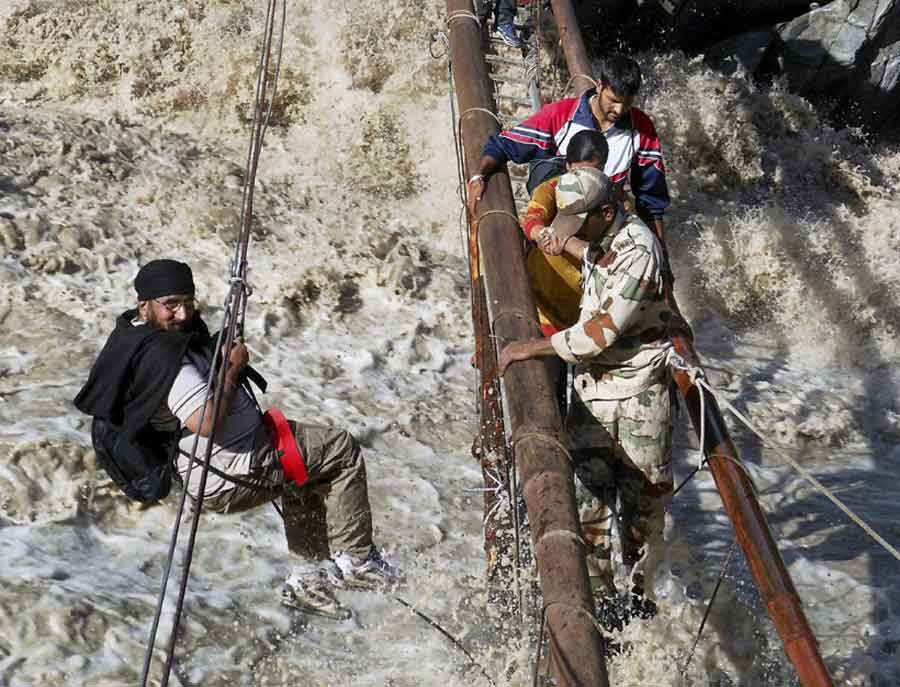 There is a large and permanent military presence in the Himalayan region. The overall emissions are a result of both the troop deployment and the movement of maintenance and administrative convoys that result in heavy movement of truck transport. This is not an attempt to make a case for demilitarisation of the Himalayan region, since troop deployment is linked with security concerns and national policies of the concerned countries. However, it is pointed out that there is ample scope for the respective countries to take practical steps to see that there is considerable reduction in the emissions caused by army deployment and administrative convoys.

The Himalayan ranges stretch across a length of 2,500 kilometres with an average width of 300 kilometres. They stand in the path of the moisture bearing currents from the South and the freezing cold air from the North and have a vital meteorological influence not only on the weather patterns of South Asia but on the entire global climate.

Three of the major river systems of South Asia, namely the Indus, Ganges and the Brahmaputra originate from the Himalayas. 500 million people inhabiting the plains of North India, Nepal, Pakistan and Bangladesh depend directly from these waters. Considerable areas of the Indus and Brahmaputra river basins fall within Chinese territory.

The Salween, Yangtze, Irrawady and Mekong are some of the important Chinese rivers that originate in the Himalayas. It is estimated that 1,400 cu.km of freshwater are locked up in the Himalayan glaciers that act as the fountainhead for the rivers of South Asia.

It is, therefore, a matter of deep concern to the entire global community and to the people of South Asia particularly that the Himalayan environment is under serious threat due to the effects of climate change. Lester Brown of the World Watch Institute in USA says that due to the effects of global warming, the pattern of precipitation in the Himalayas and the regions contiguous to the Himalayas will undergo a more drastic change in the years to come.

The increase in temperature will reduce the amount of snowfall and the snow-fed rivers of China and the Indian subcontinent will have less water flow in the summer months when the snow melts. However, since the quantum of water in the atmosphere is constant, reduced snowfall will convert to excessive rainfall during the monsoons.

The rivers will have reduced water in the summer months and the flooding of these rivers during monsoons will be more intense. We are already witness to a cycle of more pronounced drought and floods in the region.

Another alarming trend is the shrinking of the glaciers due to the rise in temperatures. The Gangotri glacier that is the source of River Ganges has receded by 600 metres in the past 40 years. There has been a marked increase in the rate since 1971 and the glacier has been shrinking by 30 meters per year. According to ISRO’s Space Applications Centre, as many as 127 glaciers of less than one square kilometre have lost 38 per cent of their geographical area since 1962.

The larger glaciers, which are progressively getting fragmented, have receded by as much as 12 per cent. It is predicted that at this rate, many of the Himalayan glaciers will be severely degraded in the decades to come and most of the snow-fed Himalayan rivers, including the Ganges, will become seasonal rivers.

It is evident that if the trend of reduced snowfall, increased precipitation and shrinking of the Himalayan glaciers continues, the result would be catastrophic for several millions of people in South Asia, Southeast Asia and China. Food productivity of the entire region would be severely affected due to the cycle of droughts and floods. It has been estimated that during this century, the accelerated ice melts in the Himalayas flowing into the seas will cause sea levels to rise by one metre. Such rise in sea levels would destroy fifty per cent of the rice fields of Bangladesh. It would also result in millions of ‘refugees of climate change’ fleeing from the low-lying areas in India, China, Bangladesh, Indonesia and Vietnam.

The mountains and valleys of the Himalayan region are home to 100 million people that include several indigenous communities whose livelihoods and culture are closely linked to the mountain ecosystem.

They face an uncertain future in the face of the climate change. Increased temperatures will have a drastic impact on their water and food security and on horticulture. They will become increasingly dependent on food imports and will be more vulnerable to flooding and Glacial Lake Outburst Floods (GLOF).

As regards the direct implications for the forests in the Himalayan region, mitigation strategies are vital in order to ensure that the forests themselves do not get degraded and destroyed due to climate change. In the middle altitudes of the Himalayas, Chir Pine is taking over Oak dominated forests. Degradation of the natural forests due to invasive species and other climate associated factors is accelerating climate change and the rise in temperatures will in turn result in further degradation of the forest ecosystems. In this context it is very important to take urgent measures to check the trend of rising temperatures in the Himalayas.

The rise in temperatures will adversely affect the biodiversity of the Himalayas. As regards the riverine ecology, the degradation of bio-diversity will be felt not only in the Himalayan region, but along the entire course of the rivers and up to the estuaries where they drain out into the oceans. Changes in the river regime, will impact inhabiting aquatic biodiversity and river dependent livelihoods.

It does not require a Nostradamus to predict the impending doom that is awaiting a region already battling with crippling poverty and overpopulation. It is also vital to realise that we do not have the luxury of time. The clock is ticking and we must act now before it is too late. A problem of this magnitude has to be tackled in its totality. A two-pronged strategy is essential. Firstly, we have to be prepared for the consequences of climate change.

This would involve adaptive measures such as planning for disaster management at the national level, changing cropping patterns and implementing water conservation measures. The second aspect of the strategy would be to try to stabilise the climate to the extent possible so that the impacts of climate change are minimised.

Climate Stabilisation of the Himalayan Region

As with any other ecosystem, the Himalayas will be adversely influenced by emission of Green House Gases (GHG) in any part of the world. However, it is crucial to understand that there would be a considerable influence from the emissions of certain GHG and aerosols from within the Himalayan ranges and the contiguous areas.

The local emissions create a regional climate impact that combines with the overall global warming to further accentuate the temperature rise. Being a snow-covered mountain eco-region; the Himalayas are particularly vulnerable due to the ‘trapping’ effect of the valleys. The GHG with a shorter life span will also remain in the atmosphere for longer periods in cold climates.

In this context, it is relevant to note that the rapid melting of ice caps in the Arctic region is influenced not only by global warming but also due to regional emissions mainly from Eurasia and oil and off-shore oil exploitation. Heavy shipping traffic with large concentrations of Nitrogen Oxide emissions is another cause for the Arctic Haze that compounds the overall effect of global warming. The Siachen Glacier is another case in point. According to a study by the WWF, the past two decades have seen a rapid melting of the glacier and it is amongst the fastest melting glaciers in the world. It was precisely two decades ago that the Siachen Glacier dispute flared up between India and Pakistan, with massive troop deployment in the area by both countries.

The study states that the Siachen Glacier has been melting alarmingly more due to military activity of India and Pakistan than due to global warming.

There is considerable stress on the Himalayan landscape due to overgrazing…

The regional emissions and pressures in the Himalayan region can be categorised as under:

Concentration of Green House Gases at the source of Emissions

While the effect of Carbon Dioxide (CO2) emissions has a more global effect, there is sufficient scientific evidence to prove that other non-CO2 gases and aerosols have a more pronounced effect on the climate in the immediate vicinity of the emissions.

Both the core Himalayan region and the contiguous areas have a number of large cities and townships that form Urban Heat Islands (UHI). The UHI effect is like a balloon of higher temperature formed over the urban areas. This balloon of higher temperature is shifted to the adjoining non-urban areas due to wind factors and causes a higher temperature in these contiguous areas outside the cities/towns. The effect could be more intense in mountainous regions due to the ‘trapping’ effect of valleys. This is indicated in the high levels of pollution in the Kathmandu Valley. Levels of air pollution in Kathmandu are one of the highest in Asia, although the number of vehicles is far less than cities such as Mumbai and Delhi. UHI effect can extend to a range of up to 2.4 times the size of the city, beyond the city limits. Hence increased urbanisation in the Himalayan region could create a number of climatic ‘hotspots’ that could contribute to the overall regional temperature rise if further unplanned expansion of these cities is not curbed.

Pressures of Tourism and Pilgrimages

Tourists and pilgrims form a large floating population in the Himalayas. They are concentrated more in the cities and popular tourist and pilgrimage destinations. They exert a more direct ‘point’ influence and contribute to the Urban Heat Island effect in the cities such as Srinagar and Kathmandu. This effect is also pronounced in site-specific pilgrimage destinations such as the Gangotri Glacier.

Military Presence in the Himalayas

There is a large and permanent military presence in the Himalayan region. The overall emissions are a result of both the troop deployment and the movement of maintenance and administrative convoys that result in heavy movement of truck transport. This is not an attempt to make a case for demilitarisation of the Himalayan region, since troop deployment is linked with security concerns and national policies of the concerned countries. However, it is pointed out that there is ample scope for the respective countries to take practical steps to see that there is considerable reduction in the emissions caused by army deployment and administrative convoys.