Civilian Rule is Repugnant to Pakistan 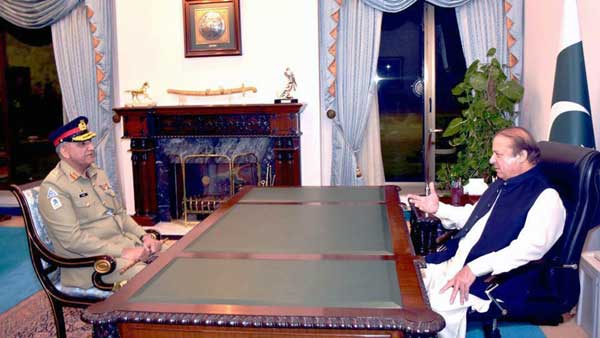 Former Pakistan President and Army Chief Gen Parvez Musharraf has made no bones of the fact the country is unsuited to civilian rule. It is no irony, therefore, that by imposing the emergency in 2007 he demolished the independent civilian institutions and made the judiciary dance to his own tune. Popular dissent was mercilessly crushed.

The credibility of senior army officers in Pakistan who take up prestigious well paying appointments abroad is suspect –because many civilians of matching status are not as welcome overseas and they resent such discrimination. Some retired Director Generals of the ISI have been taken as advisors to the governments of UAE and Saudi Arabia.

Pakistan’s former army chief, Gen Raheel Sharif has recently joined as the Commander-in-Chief of a 39 nation Saudi coalition force formed through the initiatives of Saudi Arabia’s crown prince and Defence Minister Mohammad Bin Salman al Saud on Dec 15, 2016- with the ostensible intention of fighting the ISIS- though covering collateral but significant issues in its agenda, such as, fighting Shia militias including the Houthi rebels in Yemen. Sharif had initially made his acceptance of this position contingent upon Iran also being included in the Coalition. However, even though Iran refused to join this multilateral force, Sharif unabashedly agreed to take up this position.

Gen Sharif who addressed the media at the recently held World Economic Forum in Davos (Switzerland) forcefully brought forth some matters connected to terrorism across international borders, he emphasized the fact that intelligence sharing and cooperation among victim nations will help uproot the scourge of terrorism. He further added that since established terror outfits get muted over time, it becomes very difficult to take measures adequate enough to counter them. Intelligence sharing will, without doubt help, but the outcome from such cooperation among countries will be salutary only and only if, the resolve of the countries perpetrating terror across borders in neighbouring countries is genuine.

Terror attacks within India by Pakistan’s non-State actors with complete support from Pakistan’s military and ISI –which Gen Sharif encouraged clearly challenge the credibility of his utterances at Davos, as do his assertion that providing suitable evidence to culprit nations intelligence agencies/ governments, in order to enable them to identify the perpetrators of terror and facilitate action against them, are hollow hyperbole and can be likened to the devil quoting the scriptures. Has Pakistan conducted any purposeful investigation of any terror attack within India which have Islamabad’s fingerprints- and as evidence of the same, India has given several dossiers to Pakistan?

The problem which elected governments face is because they have no liberty to make the military tow their line –they will be brazen enough to do so at their own peril.

Several years back Pakistan’s president Gen Musharraf had given a solemn assurance to India not to allow its soil to be used for terror attacks against India, what happened –were those assurances even worth the paper they were written on.

Incongruity between elected governments and the Military:

Pakistan’s civil-military ties invariably strike discordant notes because the clergy and right inclined fundamentalists team up together sinister plots to oust elected governments. This is exactly what was witnessed in all the coups which dislodged elected civilian governments.

In May 2011 President Asif Ali Zardari was literally being on the verge of being dislodged by the military. He made a desperate attempt to save his position by pleading with a good friend, an influential Pakistani-American Mr Mansoor Ijaz to speak to Hussain Haqqani (Pakistan’s ambassador to the US) to devise a suitable strategy to counter the efforts of his detractors. This made Haqqani send a secret memo to Admiral Mike Mullen and the US National Security Advisor –pleading with these officials to get the US to threaten or even, militarily intervene in favour of Zardari’s government. The entire scandal became popularly known as “memogate”.

However, the top serving military bosses have an unflinching loyalty to their senior predecessors. In the not too distant past, former president Pervez Musharraf was charged with sedition for imposing an emergency in 2007- as a negative consequence the judiciary served him with an Exit Control Order (ECO), an order which prevents a Pakistani to leave the country. While Musharraf was hell bent on having the curbs removed he didn’t plead or threaten the judiciary, instead he sought the Army Chief (Gen Raheel Sharif) to advise the government to make a legally sound representation to the judiciary to remove his name from the ECO – and lo and behold, the judiciary did the needful.

However, Prime-Minister Nawaz Sharif has been treated with much disdain by political rivals such as the cricketer turned politician Imran Khan and Tahir-ul-Qadri – their street protests against the “corrupt Nawaz Sharif government” gave Prime-Minister Sharif sleepless nights.

The teaming up of some elements within the military, radical fundamentalists and the political establishment as well as the judiciary has ominous portends and can uproot Pakistan…

Of course, the Panama Gate charges against him didn’t help, especially because the hearings by the judiciary began being conducted on a day to day basis. The problem which elected governments face is because they have no liberty to make the military tow their line –they will be brazen enough to do so at their own peril. Nawaz Sharif (who was Prime Minister and who ironically chose Musharraf in preference to others as the Army Chief- was overthrown and exiled to Saudi Arabia, by the same Pervez Musharraf)

Prime-Minister Nawaz Sharif and his brother Shabaz Sharif (Punjab’s governor) have links with radical elements – which are virtual lumps in their throats, but unavoidable as “ friends “ Not having them as “buddies “ would dislodge their governments, or worse still, imperil their lives.

According to media reports, even former Pakistan Army Chief Raheel Sharif’s reputation has been besmirched because of land grab charges.

There have been social media bloggers whose comments do not portray Pakistan in good light and have become a potent threat to its stability and the aftermath of this episode has shown that many of such bloggers have either gone underground, or most sadly, been eliminated. These issues are under investigation and if the credentials of Pakistan’s current Army Chief Qamar Javed Bajwa were fully trusted by the populace, he would without suspicion, have initiated suitable oversight mechanisms, since this competent General has Ahmadiyya links (Ahmadiyyas by a Constitutional Amendment in 1974 have been declared heretic and ‘non-Muslim’) even his genuine efforts in this direction are suspect.

The teaming up of some elements within the military, radical fundamentalists and the political establishment as well as the judiciary has ominous portends and can uproot Pakistan, since this would put a spanner in sound democratic functioning by destroying the independence of institutions firewalling against power misuse.