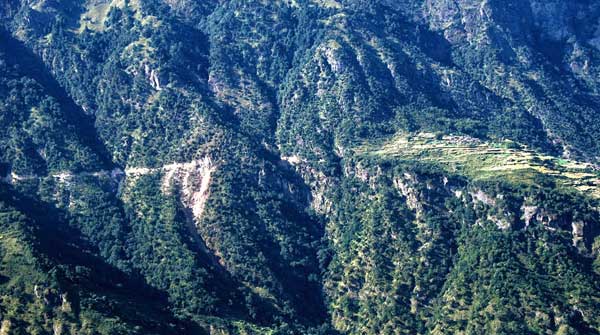 A Road in Tawang area

Some 10 days ago, I wrote a piece “Chinese objection to Indian road projects unacceptable” for NitiCentral (see below).

My conclusion was that “There is absolutely nothing wrong in the proposed project to build a road on the Indian side of the India-Tibet border.”

Yesterday, during his monthly press conference, the Chinese Defense Ministry spokesman Yang Yujun again “urged India not to take actions that will complicate the situation on the border, where the two countries have territorial disputes.”

Looking at these pictures, it is clear that the terrain is not the same on the Tibetan side of the LAC than on the Indian. China which has built extremely good roads to the LAC, objects to India struggling to her side of the LAC…

It was in response to a question about Delhi’s plan to build 54 border posts in Arunachal Pradesh (‘Southern Tibet area’ for Beijing).

Yang Yujun said: “We have taken notice of the reports. China and India have disputes over the eastern part of their border. We hope India will try to help maintain stability and peace in the border areas, instead of taking moves that may further complicate the situation.”

The same day China Tibet Online run a piece on the roads in Tibet.

The caption was the same for all the pictures: “An off-road vehicle is running on the well-paved highway with endless grassland on either side in southwestern China’s Tibet Autonomous Region”.

Looking at these pictures, it is clear that the terrain is not the same on the Tibetan side of the LAC than on the Indian.

China which has built extremely good roads to the LAC, objects to India struggling to her side of the LAC (for example in Taksing area of Upper Subansiri) where the terrain is extremely difficult.

Further, China brings lakhs of Han tourists a few kilometers of the LAC under the pretext to visit the ‘most beautiful villages of China’ or ‘experience’ the sources of the Yarlung-Tsangpo (Siang-Brahmaputra).

At the same time, India continue to insist on an Inner Line Permit (for Indian nationals) and Protected Area Permit (for foreigners).

It is high time for India to open up and live in the 21st century.

Not only should Delhi go ahead with the roads to the LAC, but the government must allow tourists to visit these remote and beautiful areas of the Indian territory.

China has no business to object.

Here are some photos of the roads on the Tibetan side. 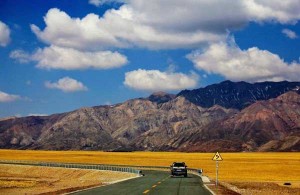 My article mentioned above:

China is unhappy about India’s plans to build a road on the southern side of the McMahon Line in Arunachal Pradesh.

Chinese Foreign Ministry spokesman Hong Lei stated that India should not “take any actions that may further complicate the situation.”

Who created the complication in the first place? The answer is China, when it invaded Tibet in 1950. Till then, India had had a peaceful neighbour and there was no border ‘dispute’ between India and Tibet.

“The boundary issue between China and India is left by the colonial past. We need to deal with this issue properly. Before a final settlement is reached, we hope that India will not take any actions that may further complicate the situation”, Hong said.

When one knows the background of the border issue, is this statement not amazing?

Who created the complication in the first place? The answer is China, when it invaded Tibet in 1950.

Till then, India had had a peaceful neighbour and there was no border ‘dispute’ between India and Tibet (or when there was, it was discussed, without using force).

The Chinese spokesperson now says: “We should jointly safeguard peace and tranquility of the border area and create favourable conditions for the final settlement of the border issue,” but why did China need to ‘liberate’ Tibet in the first place? Why did it build a road on India’s territory in the Aksai Chin in the 1950s? This indeed complicated the issue manifold, didn’t it Mr Hong?

There is absolutely nothing wrong in the proposed project to build a road on the Indian side of the India-Tibet border, as announced by Kiren Rijiju, the Minister of State for Home Affairs.

It is too easy for China to always put the blame on India. With Rijiju, every Indian can rightly hope that the construction of the 1,800 km long road could begin soon.

One could also ask Mr Hong: What about the Qinghai-Tibet and the Sichuan Tibet highways which in the 1950s changed the military and strategic stakes on the plateau? Was it not a complication for India?

In recent weeks, China has been ‘promoting’ in the media the two highways; The China Daily explained why: “In December 1954, the Qinghai-Tibet and Sichuan-Tibet highways were officially put into service, ending Tibet’s reliance on men, horses and ropes to transport goods. More than 3,000 people died during their construction. The opening of the two highways has played an important role in Tibetan economic development.”

…one should read the 1952 Annual Report from AK Sen, the India Consul-General in Lhasa. Without these roads, Tibet would have starved and the Chinese occupation of the plateau was impossible.

It was indeed crucial for Mao’s troops to occupy the Tibetan plateau and come closer to India’s frontiers.

To understand better the situation, one should read the 1952 Annual Report from AK Sen, the India Consul-General in Lhasa. Without these roads, Tibet would have starved (like it did in 1952-1953) and the Chinese occupation of the plateau was impossible.

The Indian Consul informed the Ministry of External Affairs in Delhi: “The inevitable economic distress in the wake of Chinese occupation was fast affecting the people’s livelihood. Food supplies became inadequate, prices soared to astounding heights, even the poor man’s food – the tsampa (barley flour) – could not be easily procured. In short, the Tibetans, completely confused, failed to discern the various benefits that were to be derived from the liberation of their country.”

Sen said the Tibetan villagers around Lhasa “rose up as a body… and petitioned to the Kashag (Tibetan Cabinet) that the resources of the country not being enough to cope with such large concentrations of Chinese troops, they should be withdrawn from Tibet.”

The occasion was seized by the Chinese to implicate the Prime Ministers as instigators of the move. Ultimately, the two courageous Prime Ministers, Lukhangwa and the monk Lobsang Tashi were forced to resign. It was the beginning of the end of ‘independent’ Tibet and more ‘complications’ for India as nobody had the courage to oppose the Chinese anymore in Lhasa.

Communist China began to expedite the construction of roads leading to Tibet (from Qinghai and Sichuan) in order to feed their occupying armies (to ‘liberate’ Tibet, in Communist jargon).

The Chinese, who had come to ‘liberate’ the ‘masses’ (with the cowardly support of many in the aristocracy), began punishing the ‘masses’ which had dared protest. And for some time …India started supplying rice to the PLA soldiers stationed in Tibet. Now, China is not satisfied with its highways, Beijing has decided to build an ‘expressway’.

China is also planning to open the Kyirong landport in October. The border port is 78 kilometers south of Kyirong township in the Shigatse Prefecture at the border of China and Nepal.

The China Daily recently asserted that “The nation [China] has the capability to build an expressway linking up Tibet Autonomous Region and Qinghai Province in west China if major technical barriers are overcome.”

The newspaper quotes Wang Shuangjie, Party’s chief of the CCCC First Highway Consultants Co., Ltd., a technical consultant for the planned project, who affirms: “Technically, we have the confidence to build the Qinghai-Tibet Expressway.”

Wang and his team believe that the main technical barrier lies in the 500-km frozen earth belt along the planned 1,900-km expressway that links Lhasa with Qinghai’s provincial capital Xining.

China already ‘complicated’ the situation for India by bringing the train to Lhasa in July 2006 (and now to Shigatse); the express-highway from Xining to Lhasa will further tilt the strategic balance.

China is also planning to open the Kyirong landport in October. The border port is 78 kilometers south of Kyirong township in the Shigatse Prefecture at the border of China and Nepal. The China Daily explained: “In the history of China, the Kyirong Port is one of the biggest overland trading ports between China and Nepal, and is renowned as the ‘commercial road’, ‘official road’ and ‘war road’ because of its long history of foreign trade.”

The train to Kyirong will open the gates for millions of Chinese tourists to invade Nepal. A great danger for India considering the porous India-Nepal border.

‘War road’ refers to the Manchu invasion of Nepal in 1792.

The train to Kyirong will open the gates for millions of Chinese tourists to invade Nepal. A great danger for India considering the porous India-Nepal border.

But that it not all, to complicate the situation further, Beijing plans to invest 278 million yuan (US $ 45 million) for expanding the Mainling (Nyingtri) airport. The Central Government has already allocated 139.5 million yuan (US $ 23 million) and the balance will be provided by the civil aviation development fund.

China Tibet Online says: “The abundant tourism resources and many famous scenic spots in the region attract more and more tourists to Nyingtri [Chinese Nyingchi] as their first stop for Tibet.”

In the first half year of 2014, Nyingchi has already received 836,200 tourists. The airport is built on the banks of the Yarlung Tsangpo (Brahmaputra), just north of the McMahon Line.

This airport is located just north of the McMahon Line.

The Nyingtri Development and Reform Commission announced that, from January to September 2014, the Nyingtri/Mainling airport transported 246,611 passengers, up 17.5 per cent from the same period in 2013.

For India, it is extremely worrying and it definitively complicates the situation on the north-eastern frontiers.

The train to Nyingtri in 2020 will further exacerbate the border row. Has Beijing consulted Delhi before finalising the plans? Of course, not! And then, the train to Chumbi Valley, near Sikkim!

India is indeed facing a complicated situation …entirely due to China’s bullying attitude.