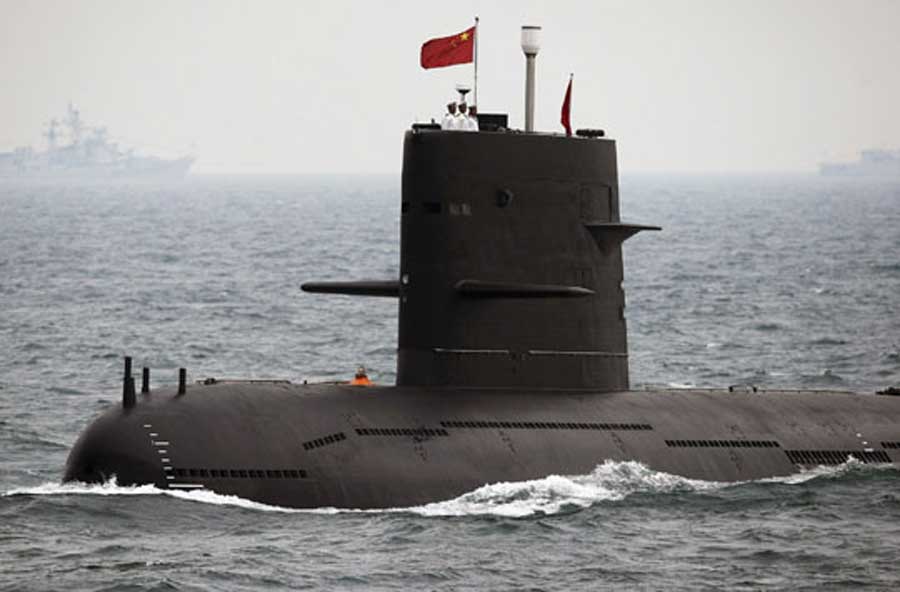 India is being squeezed simultaneously from the land and the sea. We need to await the unveiling of the third dimension—air. Indian experts should be engaged in deciphering air. Would it be limited to aircraft or would it also involve missiles?

The docking of two Chinese submarines in Sri Lanka within a space of two months raises pertinent questions. As any naval expert would agree docking of submarines is essentially different from port-calls or docking by a warship, because a submarine is a stealth weapon.

In the next five years Chinese nuclear submarines like the Type 93 and Type 94 armed with nuclear tipped ballistic missiles will be prowling these waters along with aircraft carrier battle groups.

In the next five years Chinese nuclear submarines like the Type 93 and Type 94 armed with nuclear tipped ballistic missiles will be prowling these waters along with aircraft carrier battle groups. China acquired an Ukrainian aircraft carrier by “stealth” and refitted it as the “Liaoning”. It is understood that China is going to build another four aircraft carriers.

China has the Gwadar Port of Pakistan at its command. But currently, the Chinese are not taking the risk of port calls for their naval craft in Pakistan after Pakistani Taliban tried to hijack a Pakistani frigate. In fact, Chinese President Xi Jinping decided to drop Pakistan from his itinerary for security reasons when he visited India, the Maldives and Sri Lanka in September.

Nevertheless, China and Pakistan are all-weather friends and the ties between the two militaries are very close. China has also lined up the Maldives and Male is in full resonance with Beijing including promoting Xi Jinping’s eastern silk road. All this happened while India was fumbling with a Maldives policy while the Indian company GMR managing the Male airport was kicked out and replaced by a Chinese company.

The Chinese are a little calm in Bangladesh given the fact that the present government in Dhaka enjoys good relations with India. Notwithstanding this, China continues to pursue participation in the proposed deep sea port, and is vigorously pursuing the Bangladesh-China-India-Myanmar (BCIM) land corridor to enable China’s exit and entry into the Bay of Bengal and the Indian Ocean.

Whatever Beijing does is argued as normal activity. Any move by India to strengthen its border defence is seen by China as an unfriendly act.

China’s strategy in and through Myanmar is another challenge India needs to consider actively. An isolated Myanmar was easy prey for China, but the situation has begun to change after limited reform was initiated a few years ago. Myanmar’s leaders wanted to get out of China’s suffocating clutches. This will not be easy as China controls and arms some of the Myanmarese insurgents. But this is not shutters down. In the power corridors of Naypyidaw, India is eagerly expected. It depends upon how India plays in Myanmar, but it will need much more than is being done at the moment.

In the north China’s pressure on the border is becoming more aggressive as witnessed in the last year or so. Major incursions along the undemarcated but generally understood line of Actual Control (LAC), when the Chinese premier and president were paying their separate visits to India, does not make for warm relations and strategic partnership.

India is being squeezed simultaneously from the land and the sea. We need to await the unveiling of the third dimension—air. Indian experts should be engaged in deciphering air. Would it be limited to aircraft or would it also involve missiles? Will China deploy Russian surface-to-air missiles like S-400 along the Indian border eventually?

Whatever Beijing does is argued as normal activity. Any move by India to strengthen its border defence is seen by China as an unfriendly act.

China has the loudest propaganda machinery in the world, developed astutely over many decades. It is a very effective weapon and used with success. India has also been affected with government leaders and senior security officials asking the Indian media to go soft and not provoke China. One refrain during the UPA regime was, ‘China is our first, second and third strategic concern, but do not provoke China’.

Given the proclivity of the Rajapaksa family, the Chinese reportedly have almost bought them over. Chinese investment in Sri Lanka is growing rapidly and so is the kickback to the Rajapaksa Family and Friends.

This type of advice coming from the government was nothing new. But over the years it created a piquant situation among senior officials dealing with China. Developments have either been hidden or swept under the carpet to come out later after the initiative was given away.

At the same time it is also not advisable for India to go out of the way and pick on China. India’s position must be stated with forthright confidence and defended.

If it is required to construct new roads along the borders which should have been done many years ago, then it must be done. If more observation posts are required, that must be done. Raising a mountain strike corps is as per India’s security defence requirement. It is not offensive but defensive.

On the other hand certain statements by senior leaders on foreign soil, howsoever friendly it may be, are avoidable. These must be done through the media or think tanks and at important international conferences like the annual Shangri-La dialogue in Singapore. Publicity is a sorely weak area of the government of India and many intelligence and security chiefs are dumb about psychological and media warfare, areas in which China is the reigning Champion.

All large countries have problems with neighbours. In India’s case, the British truncated South Asia in a manner to serve their future interests, leaving a complex situation. India must prosecute its relations with neighbours demanding immediate attention and action.

In terms of this article Sri Lanka has emerged as a new Chinese domino at India’s doorstep. The Tamil issue will continue to dog India-Sri Lanka relations. If Sri Lanka is serious about resolving this issue in a political manner it can be done. But the Sinhala nationalistic approach would continue to create problems.

It has become difficult to read the mind of President Mahinda Rajapaksa of Sri Lanka. His government is being run, apparently, by “Rajapaksa Family and Friends Unlimited”.

In pushing through the Maritime silk road China is determined not to suffer any obstruction, challenge or competition from any country.

Given the proclivity of the Rajapaksa family, the Chinese reportedly have almost bought them over. Chinese investment in Sri Lanka is growing rapidly and so is the kickback to the Rajapaksa Family and Friends (RFF). In particular, an article “China’s Forays in Sri Lanka” which appeared in the Colombo Telegraph dated October 27, 2012 details this network and these activities in some detail with no real reaction from either the president or his associates.

It is very well known how the Chinese buy up politicians and military top brass in small countries. They had done this in Bangladesh too, in the past. When the Chinese government takes a major foreign policy decision they do so thoroughly. Think tanks and experts including retired officials are employed to give their inputs, then the distilled policy comes out. The Chinese government focused on their energy and raw material requirements most of which were imported. They wanted to break out of the Asia Pacific region and play a greater international role. They decided they had to be the first country in Asia and, apart from Japan, which requires different parameters, India had to be neutralized.

This was not cold war strategizing. This was the emerging China which Xi Jinping has described as the “China Dream” or “Chinese Dream”. In their India plan evolving in the mid-1990s it was decided to befriend the small Indian Ocean countries with military aid and infrastructure and thus tighten the space around India. China has been largely successful.

Returning to the current situation, the Chinese leadership appears to have assessed their strength as capable enough to push through the China Dream in certain areas including India. In pushing through the Maritime silk road China is determined not to suffer any obstruction, challenge or competition from any country.

There is a question: Has the more assertive position demonstrated by the NDA government in India drawn Beijing’s ire? Very unlikely. The timing had been drawn up. If anything, China appreciates strength though they would not admit it.

Chinese think tank experts had variously assessed Prime Minister Narendra Modi and felt they could do business with him. One thing the Chinese counted upon but were proved wrong was that India-

In bilateral relations with China, India must avoid both despondency and euphoria. India cannot hope its development would come through China.

US relations would take a sharp downturn. The official assessment, as given by the Xinhua, is Modi is a “hard-line nationalist”. India cannot complain about what China is doing in its neighbourhood. New Delhi will most likely see Chinese obstruction to its Look East Policy. India, in turn, would have to strongly project its determination.

It may be noted that both China and Japan are quietly working to stabilize their bilateral relations. China is also very keen to establish a new great. power relationship with the US, which is ostensibly non-antagonistic. The reverse pressure created by its emphatically assertive and, sometimes, threatening behaviour may be telling. India needs to navigate deftly through these new developments. Prime Minister Modi’s visit to Australia could be the first step.

In bilateral relations with China, India must avoid both despondency and euphoria. India cannot hope its development would come through China. This is simplistic thinking. Chinese cheap goods for India’s mineral wealth, or India’s market is no big deal. China must be held to deliver on its talks on trade balance.

India-China bilateral relations must be dealt with at multiple levels simultaneously. Strength, especially military strength, augurs peace and stability. Once this is established, it will become easier to work in other areas.