Chinese incursions, now and then

On 17 February 1953, GB Pant, the UP Chief Minister, raised the issue once more; he drew Nehru’s attention to the lack of development in the Indo-Tibet border area. The matter had been taken up with various ministries, a comprehensive scheme sent to the Planning Commission by the UP Government, but nothing resulted from this.

Nehru regretted again the slow progress in spite of the various recommendations made from time to time. “Nothing is moving, we must get this moving… I am particularly interested in the roads, because without the roads nothing else can really be done.”

Here we see the difference between the Indian and Chinese way of functioning. In the early 1950’s, Communist China decided to ’strengthen its border’ and roads were immediately constructed. In India, even though the decision had been made at the highest level, nothing happened for several years. Files were stuck again and again in a bureaucratic morass.29

Debate in the Parliament

In March 1953, Dr Syama Prasad Mookerjee, leader of the Hindu Mahasabha, told the Parliament: “some of our frontiers on the northern side, namely the impregnable Himalayas, have today broken down and there is no reference in the Report [Annual Report of the Ministry of Foreign Affairs] as to what steps the Government are taking for the purpose of [the] securing strategic importance of that particular area. These are matters which vitally concern us.” 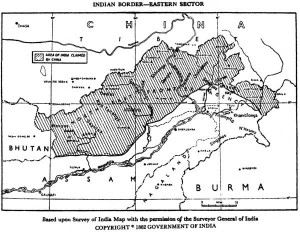 The matter was again raised during a debate in Parliament at the end of 1953. A member, Dr. Lanka Sundaram referred to the news about ‘percolation’ of Chinese troops on the Indo-Tibetan border across various passes. He claimed that 60,000 to 100,000 Chinese troops were poised across the Himalayan border, and expressed concern over the Government’s inadequate security measures. He also pointed out India’s special responsibility towards Bhutan, Sikkim, Nepal and Tibet, and referred to the existence of a note in the External Affairs Ministry in which it was mentioned that China was disinclined to accept the McMahon Line.He moved an amendment pressing for the strengthening of national defence. Though the amendment was later withdrawn, Nehru replied to Dr Lanka Sundaram on December 24, 1953: “Now, Dr Lanka Sundaram gave some facts which rather surprised me. I do not know where his information comes from about the happenings on the Indo-Tibetan border. He said that 100,000 or, I forget 50,000, troops are concentrated there. I have a few sources of information too, but I have not got that information. …I am in intimate touch this way and that way on the border, on both sides, and those figures which he mentioned, so far as I am concerned are completely wrong, and far out from truth.”32

The matter was yet again discussed in March 1954 while negotiations on the Panchsheel Agreement were going on in Beijing. Once more, Nehru tried to pacify the members: “Yesterday some of our friends here raised the subject of our borders, particularly on the Tibet side, what is known as the McMahon Line. I do not know why they had this sudden doubt because the McMahon Line constitutes India’s border at the moment on which we have a number of established check posts. And as far as we are concerned it is our border and will continue to be so. There is no dispute with any other country over this.”33

The Panchsheel and the first ‘officials’ intrusions

By the end of 1953 India had began initiating talks with the Chinese government with the view of arriving at an agreement to meet the changed situation. The rumours of incursions had made many Indian leaders distrustful of the ’special’ friendship with China.

Many asked: India offers her friendship, where are the reciprocal sentiments and actions? Is the Indian government serious about the Chinese threat?

The first Chinese incursion in the Barahoti area of Uttarakhand (then Uttar Pradesh) occurred in June 1954. This was the first of a series of incursions numbering in hundreds which culminated in the attack of October 1962.

But once again, the Indian negotiators avoided bringing the border issue to the negotiating table during the Beijing Conference which gave birth to the famous (or infamous) Panchsheel Agreement. It was not part of the agenda!34

It took less than two months after India had signed the “Agreement between the Republic of India and the People’s Republic of China on Trade and Intercourse between the Tibet Region of China and India” which included the Five Principles of Peaceful Coexistence as a preamble for Delhi to discover that the border problem had not been solved.

The first Chinese incursion in the Barahoti area of Uttarakhand (then Uttar Pradesh) occurred in June 1954. This was the first of a series of incursions numbering in hundreds which culminated in the attack of October 1962.

The irony of the story is that it is China which complained about the incursion of some Indian troops… on India’s territory! The Counsellor in the Chinese Embassy in Delhi wrote to the Indian Ministry of External Affairs on 17 July 1954: “According to a report received from the Tibet Region of China, over thirty Indian troops armed with rifles crossed the Niti pass on 29 June 1954, and intruded into Wu-Je35 of the Ali Area [Ngari] of the Tibet Region of China. The above happening is not in conformity with the principles of non-aggression and friendly co-existence between China and India.36

Many asked: India offers her friendship, where are the reciprocal sentiments and actions? Is the Indian government serious about the Chinese threat?

On August 27, the Ministry of External Affairs replied to the Chinese: “We have made thorough enquiries regarding the allegation made by the counsellor of the Chinese … that a unit of 33 Indians attached to the local garrison in U.P. (India) had intruded into the Tibet region of China…our further investigations have confirmed that the allegation is entirely incorrect. A party of our Border Security Force is encamped in the Hoti Plain which is south-east of the Niti pass and is in Indian territory. None of our troops or personnel have crossed north of the Niti pass.”37

Barahoti was (and is) well inside Indian territory; the exchange of notes continued during the following months. This exchange is the first of more than one thousand Memoranda, Notes and Letters exchanged by the Governments of India and China over the next ten years, published by the Ministry of External Affairs in the White Papers on China.

TN Kaul, the Joint Secretary who negotiated the Panchsheel Agreement, philosophically explained: “Territorial disputes have existed between near and distant neighbours through the ages. The question is whether they can and should be resolved by war, threat, use of force or through the more civilized and peaceful method of negotiation… Both sides still profess their faith in the Five Principles, and therein lies perhaps some hope for the future.38

John Lall, the Diwan of Sikkim later commented: “Ten days short of three months after the Tibet Agreement was signed, the Chinese sent the first signal that friendly co-existence was over… Significantly, Niti was one of the six passes specified in the Indo-Chinese Agreement by which traders and pilgrims were permitted to travel.”39

Looking at the way Indian diplomats were ready to bend backwards to any Chinese demands, Mao Zedong and his colleagues found more and more outstanding issues to raise.