Chinese incursions, now and then

Chinese incursions have been making headlines in the Indian media. Unfortunately, the Indian leadership prefers to mitigate the facts, to not “hurt feelings of the Chinese” or “make things worse”. After all, they say, that China is our neighbour for a long time to come and we have to learn to live with it!

Foreign Minister SM Krishna articulated the government’s position: “With China, I think the boundary has been one of the most peaceful. So, there is no issue on that.” He added that there “is a built-in mechanism which is in place and which takes care of such incursions. India has so far acted with restraint, maintaining that the Line of Actual Control (LAC) with China is not very well defined.”

When the press pointed out: “But even on the maps it is shown as an undefined border.” Nehru could only say “Maybe. All these are high mountains. Nobody lives there. It is not very necessary to define these things.”

This mechanism1 seems to have given a free license for the PLA to intrude (or send grazers) into Indian territory, as in any case ‘there is a mechanism’ to sort out the problems!

This time however, the Indian Army acknowledged the facts. The Army Chief, General Deepak Kapoor admitted that India had lodged a protest with Beijing on the incursion of a Chinese helicopter into Indian territory and the painting of some rocks in red.

The Press reported that “the Army is gathering evidence from the spots where Chinese troops had painted rocks”. What does ‘gathering evidence’ mean? Does it imply that the Army is not aware of what is happening on the LAC? Perhaps, as Nehru, the first Prime Minister of Independent India said once during a press conference: “All these are high mountains. Nobody lives there.” The history of the first incursions is educative.

The beginning of the story

May 1951 was an important watershed in the history of the relations between India, Tibet and China. That month, left with no alternative, Tibetan officials signed a 17-Point Agreement2 with the People’s Republic of China in Beijing. Mao’s Liberation Army had invaded their country a few months earlier; the Roof of the World was now under occupation3 and no nation was ready to support the peace-loving Tibetans. 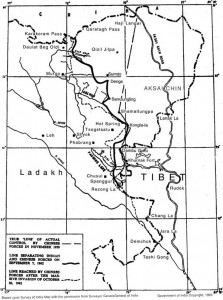 With the new Agreement, Tibet had become a mere ‘autonomous region’ of China; the other particularity of the Agreement was that, for the first time in fifty years, India was not a party to an accord between Lhasa and Beijing. It would have disastrous consequences for India and Tibet.Three years later, another agreement concerning Tibet (known as the Panchsheel Agreement) was signed,4 this time between China and India alone. This was the last nail in the Tibetan coffin; Delhi for the first time officially acknowledged that China was its new neighbour. In the meantime, Chinese troops had begun to trespass into Indian territory.

The Downgrading of the Mission in Lhasa

But let us go back to 1952. As Delhi started to dither on whether to address the confirmation of its borders with ‘China’s Tibet’ through bilateral talks with the Communist regime in Beijing,5 the first incursions took place through the porous border.

Ideologically, Nehru was not comfortable with the ‘imperialist’ privileges inherited6 from the British in Tibet.7 The Prime Minister had started dreaming of a great friendship with China. He wrote to the Chief Ministers: “For the first time, China possesses a strong Central Government whose decrees run even to Sinkiang and Tibet. Our own relations with China are definitively friendly.”8

By summer 1952, the Chinese were physically in control of most parts of the Tibetan Plateau; the Tibetans were discovering the hardships caused by an invading army.9 During a press conference, when asked about talks with China on the situation in Tibet, Nehru hinted at changes: “Nothing very definite has taken place yet… Obviously once it is accepted and admitted that the Chinese Government is not only the suzerain power in Tibet but is exercising the suzerainty, then something will flow from it. Then you cannot treat Tibet as an independent country with an independent representation from us.”10

As Nehru continued to backpedal, Beijing stepped up its pressure. It wanted India to downgrade the Indian Mission in Lhasa into a Consulate General.11 In June 1952 Nehru stated for the first time that “the status of the representative in Lhasa has never been defined for the last thirty years.”12