China's Palace in the Skies

On September 29, 2011, China launched the Tiangong-1 unmanned module from the Jiuquan Satellite Launch Centre in North-West China. The unmanned module was launched by a Long March 2FT1 carrier rocket into a low orbit of about 350kms above the Earth. In Chinese, the word ‘Tiangong’ means a “Heavenly Palace” implying a dream house in the sky, an abode for deities. The Tiangong module, about the size of a railway freight car and weighing nearly eight tonnes, is expected to remain in orbit for the next two years.

China hopes to have its space lab in place by 2020.

The pioneers of the “Space Age” such as American Robert Goddard, German Wernher von Braun the designer of the V2 rocket during World War II and the Apollo project for the US after the War, Russian Konstantin Eduardovich Tsiolkovsky and China’s Tsien Hsue-shen saw space exploration as a conquest of the moon and journey to distant planets. Their vision was one of adventure and exploration but after six decades of space flight, the race seems to be flagging, now being limited largely to the domination of near space up to a height of 36,000kms above the Earth, where satellites remain in geo-stationary orbit. 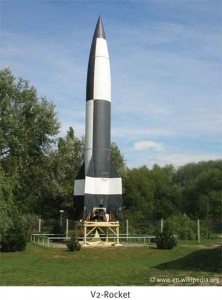 The space race was an outgrowth of the development of ballistic missiles and today, the fundamental objection to deep space exploration is its tremendous waste of effort and expense whereas the near-Earth space will remain invaluable as satellites can be employed for a variety of uses ranging from logistics to farming, military surveillance, telecommunications, weather monitoring, TV broadcast and a host of other applications. While the US and Russia will retain their position of pre-eminence in near space till the International Space Station (ISS) remains operational, China hopes to have its space lab in place by 2020, the time when the ISS is to reach the end of its life. China’s Tiangong and Shenzhou space programmes are relentlessly being driven by this objective.

On September 29, 2011, China launched the Tiangong-1 unmanned module from the Jiuquan Satellite Launch Centre in North-West China. The unmanned module was launched by a Long March 2FT1 carrier rocket into a low orbit of about 350kms above the Earth. In Chinese, the word ‘Tiangong’ means a “Heavenly Palace” implying a dream house in the sky, an abode for deities. With a length of 10.4 metres, the Tiangong module has a maximum diameter of 3.35 metres and is hardly a palace in comparison with the International Space Station. The Tiangong module, about the size of a railway freight car and weighing nearly eight tonnes, is expected to remain in orbit for the next two years. It will be used to validate the operational concepts of docking and undocking and will house Chinese astronauts for long spells in space.

The Shenzou-8 mission is to be followed by Shenzou-9 which will carry one astronaut.

Significantly, the launch date was just prior to China’s National Day on October 01. Since the US Shuttle programme has wound down completely, China’s space lab programme is of special significance. Upon complete assembly, the Chinese space lab will weigh only 66 tonnes when compared to the 431-tonne ISS and the 140-tonne Russian Mir.

On November 01, 2011, the Shenzou-8 spacecraft was launched from the Jiuquan Satellite Launch Centre and after a two-day orbital chase, latched onto the Tiangong-1 space lab module. Chang Wanquan, the Chief Commander of China’s Manned Space Engineering project, announced the successful achievement of the docking sequence designed to test technologies that China will use to assemble a space station in the coming decade. China has developed the technologies indigenously as dependence on foreign sources would be fraught with constraints.

The Tiangong-1 module was used to validate the operational concepts of docking and undocking.

After lift-off from Inner Mongolia, the initial manoeuvreing was controlled from the ground but after the Shenzou-8 spacecraft came within 50kms of the Tiangong-1 space module, its onboard sensors took over and the spacecraft guided itself towards Tiangong-1 and docked with it successfully 350kms above the Earth. The inter-locked Tiangong-1 module and Shenzou-8 spacecraft orbited the Earth for 12 days and then to prove beyond doubt that China had mastered the technology for docking in space the Shenzou-8 undocked, fell back to a distance of 140 metres and repeated the docking exercise. After disengaging for its journey back to Earth, Shenzou-8 landed safely on November 17 at a site in Inner Mongolia. The Shenzou-8 mission is to be followed by Shenzou-9 which will carry one astronaut and later by Shenzou-10, which will carry two or three astronauts, one of whom may be a woman.

The recent pirouette in space by Tiangong-1 and Shenzou-8 is merely a small facet of China’s manned space programme. China had begun the initial planning of its space programme in July 1985 against the backdrop of very active space programmes of the leading space-faring nations. The US was working on the Strategic Defense Initiative and Space Station Freedom. The USSR had the Buran Space Shuttle system, the Mir Space station and its own Star Wars programme. Europe was developing the Hermes manned space plane and Japan, the Hope winged spacecraft. India was also entering the fray. 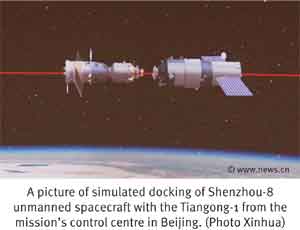 In 1986, members of the standing committee of the Chinese Academy of Sciences proposed initiatives to accelerate development in the fields of biology, astronautics, information technology, military technology, automation, energy and material sciences. The plans called for a space station and a space transportation system as also to develop on parallel track, a vertical take-off and re-useable shuttle spacecraft. However, in 1989, President Deng Xiaoping had rejected the plans. Three years later, fresh plans were drawn up as Project 921, which proposed a manned flight in the Shenzou spacecraft in 2003 followed by the establishment of a permanent space station. In 1992, a three-phase plan was presented and approved.

China has even acquired a space tracking station in Dongara, a remote region of Western Australia.

The first models of the proposed space station were displayed at Expo 2000 in Hanover, Germany. In the years 2001 and 2002, there were media reports in China of the space lab and thereafter, there was no report of this programme till February 2004, when it was announced that the first space module would be launched only after Shenzou 6, 7 and 8 missions had proven basic rendezvous and docking capabilities.

The Shenzou programme was central to the development of the space lab as it had to establish the operational capabilities of various technologies developed in China. A building-block approach was designed where Shenzou-1 was launched on November 20, 1999, to examine the performance and reliability of launch systems and the technologies related to capsule connection and separation, heat management and telemetry.

On January 16, 2001, Shenzou-2, the first formal unmanned spacecraft was launched and China conducted experiments related to space life sciences, space material, micro-gravity and space astronomy. Shenzou-3, launched on April 01, 2002, was the precursor to manned flight, the spacecraft carried a dummy astronaut with human physical monitoring systems and the craft also had escape and emergency rescue functions. Shenzou-4, launched on December 30, 2002, addressed some of the issues with earlier flights. On October 15, 2003, Shenzou-5 lifted off with astronaut Yang Liwei onboard and was China’s first manned space flight remaining in orbit for less than a day.