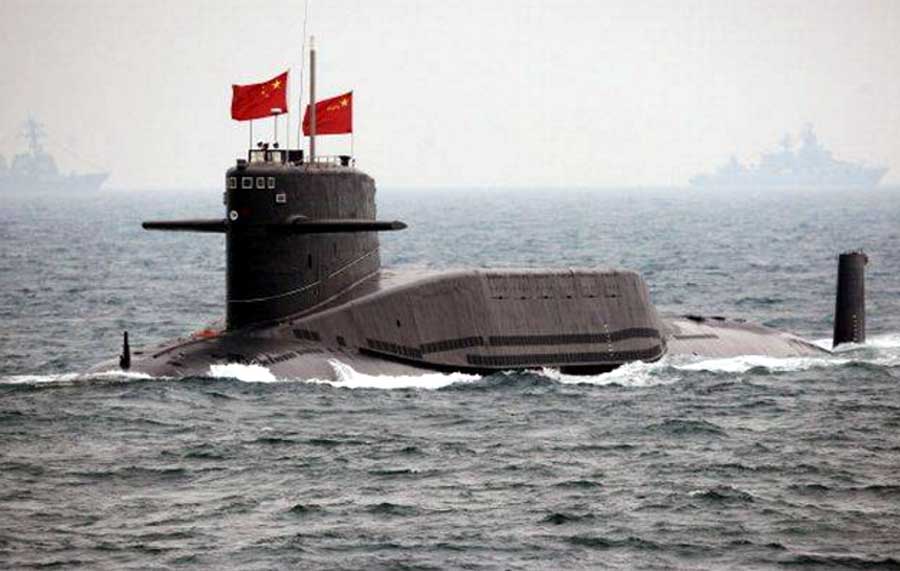 The modernisation of the People’s Liberation Army Navy (PLAN) has resulted in growth of a range of its fleet size and capabilities. Research conducted by RAND suggests that China’s surface fleet over the last few decades has expanded rapidly. As of 2018, the Chinese Navy consists of over 300 ships, making it larger than the 287 vessels comprising the deployable battle force of the US Navy.

It is believed that China seems to be succeeding in its plan to increase its influence in the Indian Ocean Region (IOR) in order to diminish India’s stature.

RAND has reported that based on contemporary standards of ship production, over 70 percent of the PLAN fleet in 2017 was considered “modern”, up from less than 50 percent in 2010. China is also producing larger ships capable of accommodating advanced armaments and onboard systems. The Type 055 cruiser, for instance, is planned to enter service in 2019-20 and weighs roughly 5,000 tons more than the Type 052D destroyer that entered service in 2014. The collective tonnage of the ships launched by China from 2014 to 2018 was an impressive 678,000 tons, larger than the aggregate tonnages of the navies of India and France combined.

It is believed that China seems to be succeeding in its plan to increase its influence in the Indian Ocean Region (IOR) in order to diminish India’s stature. China’s newly released defence white paper has emphasised a greater focus on the seas, including an expanded naval role beyond its maritime backyard. The white paper says that as part of China’s effort to establish itself as a major maritime power, its navy will shift focus from “offshore waters defence” to “open seas protection” — a move that explains its new focus on the Indian Ocean with the Maritime Silk Road initiative at the vanguard of the Chinese grand strategy.

The Chinese manoeuvring in the Indian Ocean aims to chip away at India’s natural-geographic advantage. “China’s growing presence in the northern part of the Indian Ocean is a challenge for India”, said Navy chief Admiral Sunil Lanba. Admiral Lanba during his visit to the UK in March 2019 mentioned that no other nation has invested as much as China in ship-building. He referred to the presence of an estimated six to eight Chinese naval ships in the northern part of the Indian Ocean at any given time as well as submarines.

As part of its efforts to increase its influence in the region, China has been pursuing a policy of providing massive funding to developing economies and the move has been paying rich dividends. The problem starts when the countries receiving the funding are unable to pay back the loan and get caught in Chinese debt trap. It is under these circumstances that these countries feel bound to lease out land and other strategic facilities to China. An example of such an exchange is the Hambantota Port of Sri Lanka. Unable to bear the burden of debt repayment, the facilities at the port have been leased out to China for 99 years.

The growing presence of the Chinese navy in the Indian Ocean where it already acquired a logistic base at Djibouti has aroused concerns in India.

China Daily Mail on November 22 2014 quoted Sri Lankan sources and reiterated an old report about the “Chinese plans to build 18 naval bases in the IOR (Indian Ocean Region) in Hambantota (Sri Lanka), in Pakistan and Myanmar, Walvis Bay (Namibia), in Djibouti, Yemen, Oman, Kenya, Tanzania, Mozambique, Seychelles, Madagascar and other parts of Indian Ocean”. The growing presence of the Chinese navy in the Indian Ocean where it already acquired a logistic base at Djibouti has aroused concerns in India.

An article in The Economist on October 11 2017 stated that China has invested in ports in 34 countries globally. Indians suffered a setback in the IOR recently in Maldives. The problem actually started in 2012 when Maldives decided to oust an Indian company that was given the contract to construct an airport at Hulhule Island, close to Male. Even as relations between the countries continue to deteriorate, China has stepped in with millions of dollars in investments. The Chinese are reportedly in the process of constructing a naval base at Gaadhoo Island, which is over 260 km from Male.

Indian efforts to establish itself in Assumption Island, Seychelles are also not proving to be a smooth sail. An agreement reached in 2015 was not accepted by the opposition in Seychelles National Assembly. It had to be modified in 2018 when Seychelles President Danny Faure visited India. There is hope of the new agreement being accepted by the Seychelles National Assembly now with the President having consulted the opposition in advance. India also extended a $100 million credit line to augment Seychelles’ defence capabilities.

The status in South China Sea has a spill over effect on the Indian Ocean Region. Indians have not been able to create bases in the area, but its Act East Policy has led to improvement of bilateral relations with a host of ASEAN countries. India and ASEAN nations have a free trade agreement in place. A pact with Singapore for access to Changi naval base has been signed. India and Vietnam have been cooperating on areas of mutual interest, and in 2016, they upgraded their relationship to a comprehensive strategic partnership. However, the relationship has been primarily limited to naval exercises. No agreements to provide logistics at each other’s bases have materialised.

The improvement of maritime infrastructure for both operational capability and security of sea lanes is one of the biggest challenges confronting the new government.

It is important for India to have dependable partnerships. In the last Malabar naval exercises held in June 2018 hosted by Indian Navy, Japan and the US had also participated. The Australians, though keen, were not invited. However, it’s only a partnership of major powers that can stop the Chinese from trying to extend dominance in the South China Sea and beyond to the Indian Ocean Region.

As Indian strategists see it, any Chinese activity in the IOR diminishes India’s security. It is imperative that the Indian government comes up with a substantial naval doctrine based on changing geopolitical realities in maritime Asia. The improvement of maritime infrastructure for both operational capability and security of sea lanes is one of the biggest challenges confronting the new government.

The principal concern for India is its navy’s ability to counter China’s A2/AD. China’s A2/AD components include cyber warfare, submarines, fighter interceptors, over-the-horizon radars, surface-to-air-missiles, anti-ship ballistic missiles, ocean surveillance satellites, anti-satellite weapons, radio-frequency jammers and ground-based lasers. China has also built artificial islands with embedded A2/AD capabilities and has since maintained de facto authority over them.  It displays increasing confidence of China towards gaining control over the IOR’s maritime resources, which it considers essential for its continued growth in the future.

These challenges are changing the nature of naval competition and warfare. To address this rapidly changing security environment, the government must accord to the Navy the strategic importance that is necessary. One option could be the introduction of the Indian version of A2/AD. China is confronted with its ‘Malacca dilemma’. Beijing’s intensive use of the Malacca and Lombok/Makassar straits in South East Asia is the source of this concern. India can apply this counter A2/AD doctrine to deter China in the Indian Ocean. A second approach would be to converge India’s maritime interests vis-à-vis the US. The technologically advanced US navy could strengthen India’s maritime forces. However, the viability of the doctrine would depend on the government’s ability to kindle maritime consciousness in foreign policy and build on India’s maritime infrastructure.

…Citing the Chinese threat, it is also necessary for the Indian Navy to acquire nuclear powered aircraft carrier using American technology and systems, which is however going to be very expensive in comparison with the existing systems.

With even Pakistan now sporting an armed unmanned aerial vehicle (UAV) developed with Chinese assistance, India has decided to accelerate the development of its own drone fleet. The Indian Navy wants the unarmed surveillance drones to keep watch over the Indian Ocean. The Guardian Unmanned Aircraft System (UAS) which India is buying is the naval variant of the Predator B drone or to the MQ-9 Reaper. Citing the Chinese threat, it is also necessary for the Indian Navy to acquire nuclear powered aircraft carrier using American technology and systems, which is however going to be very expensive in comparison with the existing systems. “We are acquiring our ships, aircraft and submarines in accordance with the Navy’s current Maritime Capability Perspective Plan. There are presently 40 ships and submarines on order.” said Chief Admiral Verma. In addition to this, Navy has aggressive acquisition programmes in aviation including induction of MIG 29K, the acquisition of Boeing P8I MPA aircraft, additional Kamov 31 helicopters, and new multi-role helicopters likely from the US. There is also a requirement for India to increase its defence spending. Growth and security of nations have to be simultaneously pursued and resource allocations on both counts are important in shaping its future.

In coming decades, geopolitical tensions between China and India, the two dominant powers of Asia, easily could intensify as they vie for hegemony over South and Central Asia, Indonesia and even the South China Sea, for political influence, oil, resources and markets.