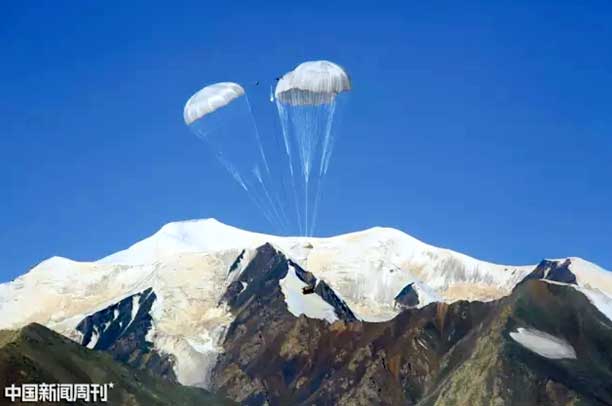 Since the reorganization of the PLA was ordered in January 2016, there was not much news about China’s Airborne Corps albeit it was appreciated China will continue to maintain its airborne capability in its quest of China-centric Asia and aspirations of becoming a global power, even surpassing the US. The 43rd, 44th and 45th Divisions of China’s 15th Airborne Corps were equated with America’s 82 and 101 Airborne Divisions.

Each division was known to have around 10,000 men, with seven classifications: pathfinders; reconnaissance; infantry; artillery; signals; engineers, and; chemical warfare. Information about China’s 16th Airborne Corps was never made available by China. It has now emerged that in May 2017; China’s 15th Airborne Corps has been reorganized; re-designated as the ‘Corps of PLA Airborne Troops’ with units of the former Divisions split into Brigades.  Two regiment-level units are integrated with the Academy of Airborne Troops to form a new unit.

The erstwhile four-tier command system of 15 Corps (corps-division-regiment-battalion) has been flattened to three tiers (corps-brigade-battalion) – divisional headquarters eliminated. The reorganization is aimed at improving faster response capability as per Zhao Jinjun, Deputy Chief of Staff of Airborne Troops. In another move, the former special operations regiment directly under HQ 15th Airborne Corps has been expanded into a special operations brigade.

It was on July 26, 1950, that China’s 1st Airborne Brigade began raising under the PLA Air Force (PLAAF). Its paratroopers made the first parachute jump on September 29 the same year. This airborne brigade was assigned to the 1st Marine Division, which eventually became an airborne division. The designation of this division underwent changes to finally being called Airborne Division.  In May 1961, China’s Central Military Commission (CMC) changed the designation of PLA’s Army (that fought in the Korean War) to PLAAF 15th Airborne Army, placing PLAAF’s Airborne Division under the 15th Airborne Army.

Interestingly, the 15th Army was reduced to three brigades during restructuring of the PLA in 1985. This was again reverted to Division structure with an increase of 25 percent manpower and equipment during 1990s when the concept of ‘People’s War’ was replaced by the ‘Limited High-Intensity War’ concept. Thereafter, the formation was referred to as the 15th Airborne Corps.

In May 1989, 43rd and 44th Paratrooper Brigades of 15th Airborne Corps’ were deployed in Beijing to enforce martial and suppress the Tiananmen Square protests. As mentioned above, China’s 15th Airborne Corps has now been reorganized and re-designated as the ‘Corps of PLA Airborne Troops’ in May 2017.

During the recent 15-day competition of the International Army Games 2017 held in China during July-August this year, Chinese airborne troops won first place in 11 of the 12 events, winning the overall championship in the platoon level airborne competition. Other teams participating in the competition were Russia, Kazakhstan, Iran, Morocco, South Africa and Venezuela. Russia and Kazakhstan were 2nd and 3rd respectively in the overall championship.

During the very first International Army Games which took place in Russia during 2015, Chinese airborne troops excelled in the 5 km accelerated march, overcoming obstacles and shooting with small arms, parachuting, taking the first place in the latter ahead of the Russian team. During the second International Army Games, also held in Russia during 2016, the Chinese paratroopers came in third place in the overall championship. From their raising 67 years ago in 1950, the Chinese airborne forces have come long way to when President Xi Jinping inspected China’s Airborne Corps on July 30, 2017 and was given a demonstration of airborne operations at the Zhurihe training base.

Speedy deployment of US 82 and 101 Airborne Divisions during the Gulf Wars in 1990s, Afghanistan and Iraq, were keenly watched by the Chinese for drawing suitable lessons. They also witnessed armies of developed countries adopt a new generation of heavy-duty equipment, which could be airdropped for supporting airborne operations, including ammunition supply. All this led to China’s Central Military Commission (CMC) recognizing airborne troops (termed the ‘flying infantry’) and putting into the transformation mode on fast track.

China inducted the indigenous Y-20 large transport aircraft into service last year and its airborne troops are moving towards higher level of integration with heavy equipment, stronger maneuvering capability and faster response. Chinese airborne troops are on the way to heavy mechanization. The new strategic positioning of Chinese airborne troops is that they are a strategic service in the national armed force system, a force of emergency maneuvering responsible for all-domain combat, and a strategic fist directly controlled by the highest command.

According to Zhao Jinjun, such a positioning depends on the unique and irreplaceable features of airborne troops. Their maneuvering speed among all arms and services can reach places that other armed forces cannot reach or cannot reach timely, so they are irreplaceable. In terms of the scale and equipment of airborne troops, US, Russia and China rank the top three in the world albeit Chinese lack actual combat experience. Since the 18th CPC Congress in 2012, Chinese airborne troops have moved faster in strategic transformation including mechanization and extensive IT application.

Pakistan’s 50th Airborne Division is actually ‘not’ an airborne division but couple of Air-Mobile Brigades that  too require enhancement of heli-borne assets.  Some troops from this division were para-dropped in support of special forces and ground forces during Op ‘Black Thunderstorm’ conducted by Pakistan in SWAT during 2009. But, it is interesting to note the discussion in ‘Pakistan Defence’ that the country does need an airborne division in the true sense.

Airborne Forces ‘threat in being’; simply alerting airborne forces conveys political signal at the strategic level. Airborne troops allow a commander to insert surface forces directly and quickly into battle and to sustain combat operations; a capability which, in most circumstances, cannot be accomplished by other means. Sure, high air defence environment threatens airborne operations but such operations need not be at the very outbreak of hostilities.

Besides, optimization of futuristic technologies (cyber, electronic, space) combined with special operations should focus on degrading enemy surveillance and air defence capabilities. There should be no doubt that India needs to preserve its lone Parachute Brigade for airborne tasks within and across our borders, and for OOAC (out of area contingencies). Besides, India may have to undertake operations in concert with strategic partners, with or without formal military alliance. These troops also provide invaluable asset for heli-borne operations.

As a regional power, progressing towards becoming a global power, India would need power projection capabilities in future perhaps more than now. Maintaining airborne capability is simply a strategic imperative for India.