At the official level, Russia is actively working at developing cooperation with China in the economic and political arenas. At a meeting in the Kremlin with Russian diplomats in July 1995, President Yeltsin outlined the fundamental Russian position on China. He said “China is the most important state for me. It is a neighbor, with which we share the longest border in the world and with which we are destined to live and work side by side forever. On the success of our cooperation with China depends Russia’s future. Relations with China are extremely important to us in global politics as well. If we can rely on the Chinese shoulder with our relations with the West, the West will be more considerate to Russia.”1

The purpose of this partnership was to promote the emerging multipolar structure of the world and to oppose attempts of hegemony by one force (obvious reference to the US), in a new situation when “there are absolutely no controversial issues between Russia and China.”2

President Putin, speaking in the 2000 Summit of the Shanghai Forum in 2000, said, “China for us is really a strategic partner in all spheres of activity.”3

The same year, Foreign Minister Igor Ivanor, said, “In the strategic sense we do not have problems in the nearest future,” and that “relations between Russia and China are on the rise.”4

Recent opinion polls in Russia also show that the majority of the Russian public does not subscribe to the view that China presents a threat.5 Thus from the purely political point of view, Russia for the foreseeable future can only be expected to develop closer ties with China. Elements which see China as a threat, be it at the radical nationalist or radical Westernist fringe of the Russian political spectrum,6 will continue to be of marginal influence — just about a nuisance factor.

However, Russian scholars feel that the problem of growing anti-Chinese feeling and distrust of the Chinese people in Siberia and the Russian Far East (RFE) cannot be discounted. More often than not, the Chinese “demographic threat” expressed by the RFE is seen as motivated and xenophobic.

The fears of the RFE are not unfounded. The area was confirmed as Russian territory only in 1860 — it falls well within the period which China terms “the century of humiliation.” According to the official statistics, in 1916, of the total population of Vladivostok one third was Chinese. The city authorities even created the so-called “Chinese Police” a special police department employing ethnic Chinese officers, raised to fight crime among the Chinese population.7

After the creation of the Soviet Union, relations with China played an important role in Moscow, scheme of foreign policy. As early as 1923, on the behest of Sun Yat-sen, the Russian Communist Party sent two important representatives to assist in the reorganization of the KMT.8 After the rise of the communists in 1927, Moscow began backing them in their struggle for consolidation. Minor skirmishes did occur in the late 1920’s with weak forces of warlords over the ownership of the China Eastern Railway. In 1937 Stalin carried out a purge of the REF by moving its Chinese and Korean population (most of the Koreans were moved to Kazakhstan and Chinese sent back to China).9 It was only after the split with Communist China in the early 1960s that China began to be taken as a threat. Fears about a war with China became very real when the two countries’ troops clashed along the Ussari in 1969. From that time on official Soviet theorists began to view China as an “instigator of a new world war.10 Dissident voices in Russian have always raised the issue of the “China threat” being real. Russian historian Andrei Amalrik, on one extreme, had in the early 1970s argued that “the relentless logic of revolution is propelling China towards a war which the Chinese leaders hope will solve the country’s difficult economic and social problems and secure for China will be seeking national revenge for the centuries of humiliation and dependence forced on her by foreign powers. “It will also seek to solve her problems of extreme overpopulation, hunger and an agriculture that needs extensive rather than intensive development and requires acquisition of new territories.”11

Another dissident voice, which has expressed this concern, is that of Aleksandr Solzhenitsyn. In his view (1973) there are two main reasons for the war with China, one is the “dynamic pressure of a China one billion strong on our yet un-exploited Siberian lands,” and the other being ideological differences. He argued, “For the next half century our only genuine military need will be to defend ourselves against China, and it would be better not to go to war with her at all. No one else on earth threatens us, and no one is going to attack us.”12

In the final years of the Soviet era, normalization of relations with China was progressing well in the economic sphere.13

The Border Talks were also progressing well. Soon after the collapse of the Soviet Union, Russia (along with the newly created Central Asian Republics) and China signed a comprehensive Border Treaty incorporating a force reduction clause as well. However, local leaders and industrialists expressed resentment and dissent and expressed that the transfer to PRC of the strategically important sections of the border would signal the prospect of Russia losing its position in the Far East. Political commentators, however, claim that the anti-Chinese stance of the regional administrations of the RFE results mainly from their anti-Moscow rhetoric.14

Alexander Lukin is of the view that China as a threat to Russia has today penetrated into some circles in Moscow amongst different political groups and ideological leanings. A specialist in security and a deputy from the Yabloko movement, Aleksey Arbvatov, believes that in future China can be a serious threat to Russia since its undemocratic political structure makes its development unpredictable as opposed to Japan (“a democratic country and an integral part of West”). While Arbatov concedes that today there are no grounds to call China aggressive, “at an appropriate moment nothing would be able to prevent China from turning to the north.” 15 Some political parties also club the US with China as its main adversaries who want to destroy Russia. This paranoia obviously stems from it considerably weakened military and economic status.

In September 2006, PLA conducted an unprecedentedly large 10-day exercise, involving the Shenyang and Beijing military districts. Shenyang abuts the Russian Armed Forces’ Far Eastern District, and the Beijing district shares a border with Russia’s Siberian Military District. During the exercises, Shenyang units advanced 1,000 kms into the Beijing district, where they engaged in joint war games. To military observers, these exercises seemed to be practice for a possible offensive operation against Russia. Andrei Piontkovsky, Executive Director of the Center for Strategic Studies in Moscow feels that paradoxically, these exercises were undertaken during a period when bilateral political and economic ties appeared on the surface to be at their highest point.

Russia has an important place in Chinese geopolitical calculations, as a supplier of both modern weaponry and energy resources needed to continue its modernization. Therefore, the Chinese are doing everything possible to strengthen their economic and political position in Russia, and to draw Russia into their sphere of influence. And China is succeeding, most importantly by consistently reinforcing Putin’s anti-American and anti-Western agenda. While Beijing/Shenyang exercise should have indicated to Russian leaders that China’s intentions toward Russia may not always be benign, Russia’s political and military leadership seems not to sense any threat; on the contrary, they continue to sell the Chinese advanced weapons.

According to some experts, conflict between Russia and China is possible precisely in Central Asia, given the clear differences in the two countries’ economic and political interests in that region. Aside from control of the region’s energy supplies, water has become a potential source of conflict, given China’s serious shortages.16

Russian Prime Minister Vladimir Putin, while inaugurating a pipeline to carry Siberian oil to China and Moscow, in September 2010, said, “Russia has nothing to fear from China, and concerns that millions of Chinese will someday occupy vast swathes of Russian territory in the Far East are overblown.”17

Though Russian governors in the Far East occasionally raise the specter of the “yellow menace” and talk about the danger posed to the under populated region by unregulated Chinese migrants. But this kind of talk rarely emanates from Moscow and certainly does not affect troop positioning — only three of the 85 new brigades are situated in the Far East.

So why does Russia understate the potential threat from China? It is argued that goals of Russian foreign policy are at heart about restoring lost prestige. Russians measure the status of their country by comparing it to Europe and the United States, not to China. A vast majority of Russians still see the Chinese as inferior and do not view China as a valid state for comparison with Russia. As a result, China is largely ignored in most Russian foreign policy formulations and threat assessments. 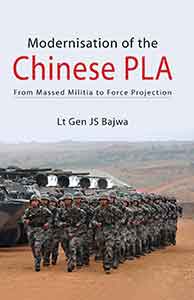 Both Russia and China, historically, have been continental powers in their strategic outlook. Their concept of power emanates from large ground forces. Both continue to maintain such forces. Russia has an advantage in air and naval forces, which it was forced to develop during the Cold War era. For the time being, however, both countries need each other in the international arena. Russia is struggling to secure the strategic import that it once had while China is seeking to acquire this new strategic awareness. It is, therefore, unlikely that the China threat will manifest against Russia in the near-term. However, ethnicity, a phenomenon of the modern era, can dangerously alter the status quo, particularly in the Russian Far East, with violent consequences. This is what Russian dissenting voices feel is likely to be a reality in the long-term.